NOTE: This article is about the incarnation of Genie from the 2019 movie. The mainstream version can be found here: Genie (Disney).

Genie is the deuteragonist of Disney's remake of the 2019 film, Aladdin.

Genie is portrayed by Will Smith, who also portrayed a fictionalized version of himself in The Fresh Prince of Bel-Air, Mike Lowrey in the Bad Boys film series, Steven Hiller in Independence Day, Agent J in the Men in Black film series, Deadshot in Suicide Squad, and Henry Brogan and Junior in Gemini Man, and voices Oscar in Shark Tale and Lance Sterling in Spies in Disguise.

While trapped inside the cave, Abu reveals that he stole the lamp back from Jafar. Aladdin notices the lamp is a bit dusty and gives it a rub. This causes the lamp to release a powerful Genie who can grant him three wishes as long as he is holding the lamp. Aladdin wishes to escape from the cave (though he makes the wish without holding the lamp, keeping his three wishes in tact) and he, Genie, Abu and Carpet find themselves in the middle of the desert. Genie instructed Aladdin on wishes that he can't grant; he can't kill anyone, resurrect someone from the dead or make anyone fall in love with anyone else. After seeing Genie's potential, Aladdin wishes to become a prince in the hopes that he can be with Princess Jasmine. Genie transforms him into Prince Ali and parades him to the Sultan's Palace with an entourage, where the Sultan welcomes him. Unfortunately, much to Genie's chagrin and embarrassment, Aladdin ends up trying too hard to act like a prince and ends up making some rather embarrassing gaffes and comments when presenting himself. Later on when they're at a party, he tries to to encourage him to be more confident and speak to Jasmine. He also helps him do an impressive dance when that's being held, up to and including having him end it with a backflip. though Jasmine still isn't impressed due to coming it off as showboating.

Later on, Aladdin convinces Genie to help him get into Jasmine's room by distracting Dalia since he can tell he likes her. Even though he comes off as comically clumsy and awkward, she reciprocates his feeling, and while the two of them go out for a stroll, Aladdin bonds with Jasmine over some of their shared ideals, especially once they go on a carpet ride together. However, Jasmine also figures out he's really Aladdin and not Prince Ali like he claims. However, worried that she'll view him as a nobody, Aladdin makes up a story about him pretending to be Aladdin to get to know Agrabah and its people better. When he shares this story with Genie, he tries to convince him to be more honest and tell her who he really is, but the subject is dropped shortly after that.

The following morning, however, Jafar has Aladdin captured, and tied to a chair since unfortunately, he's also seen through his disguise and interrogates him about the lamp's whereabouts. When he refuses to admit who he really is and insists he doesn't know what he's talking about, Jafar pushes Aladdin out of his tower and into the sea. Thankfully, Abu and Carpet arrive with the lamp, and Aladdin manages to rub it before drowning. Genie then appears and rescues Aladdin, and after speaking with Jasmine, they expose Jafar's treachery to the Sultan. Genie was celebrating with Aladdin that he got the girl and pulled himself together after a messy start. However, due to worrying that he would lose Jasmine if they find out he's not really a prince and being guilt-tripped due to the Sultan praising him for his honesty and integrity, Aladdin feels he needs to keep pretending and shape himself into being Prince Ali, as well as admits he feels he needs the Genie's help to keep this up and can't fulfill his promise to use it to set him free. Genie then expresses his disappointment that despite being the first master he's ever considered a friend and the fact that he bent the rules to save him, he still feels he needs to lie rather than do the right thing and admit who he really is before going back into the lamp. Aladdin then leaves the palace and heads back to his real home in frustration and a state of conflict to clear hie head, but unfortunately, in the meantime, Iago frees Jafar by snatching the keys to his cell and Jafar subsequently steals the lamp from Aladdin while in disguise without him even noticing. Jafar then laughs manically upon rubbing the lamp and confirming he had what he wanted for so long.

After this, Jafar makes him way back to the palace and into the throne room where he reveals the power he now has. He subsequently commands him to grant him two wishes, first having him make him the new Sultan of Agrabah, and then when Jasmine still stands up to him and convinces Hakeem to do what is right and lead the guards in arresting him, h has him turn him into the most powerful sorcerer in the world. During the commotion, Aladdin notices the lamp was missing and went to the palace to take it back from Jafar, but having already been granted the powers of a sorcerer, it was too late. Jafar noticed him trying to take the lamp, subsequently outs his identity to Jasmine and the Sultan, and banishes him and Abu to a frozen wasteland. However, Genie discreetly transports the magic carpet to the frozen wasteland to find and save them. The Magic Carpet found them and headed back to Agrabah. Meanwhile, Jafar tortured both the Sultan and Dalia to force Jasmine into marrying him, not out of love, but in order to make the Sultan suffer from losing what he cares about most to him, with Genie breaking his composure and asking him to stop despite him being obliged to remain neutral since he cares about Dalia.

Thankfully, Aladdin and Abu get back just as Jasmine was being forced to say "I do", so she takes the lamp from him him and tries to escape with them, but thanks to his powers, Jafar was able to force them back by creating a powerful storm and get his hands on the lamp once again. He then traps Jasmine, Dalia and the Sultan in bubbles of suspended animation for their defiance and starts to torture Aladdin to death while bragging about his power, but Aladdin had a trick up his sleeve; he appeals to Jafar's obsession with being the most powerful individual around and not being second to anyone by pointing out the Genie is still more powerful than him, and having given him his powers, he can just as easily take them away. Despite adamantly denying this since he serves him, this enrages Jafar so much that he uses his third wish to the Genie to make him the most powerful being in the world, even more so than him.

Because he words this wish in a vague manner, Genie exploits this by turning him into a powerful Genie. While he initially revels in his newfound powers and tries to outright destroy Sherebad, he is stopped and realizes much to his horror that he now has to abide by all the rules that come with being a Genie; Genies can't kill or give any free wishes to himself and they are imprisoned in a lamp until somebody rubs the lamp and he needs to grant them their three wishes. Jafar and Iago are then imprisoned in the lamp, after which everyone is freed, with Genie fixing the Magic Carpet and chucking the lamp Jafar and Iago are imprisoned in into the Cave of Wonders. As a way of showing his gratitude, he then makes an offer to Aladdin to get rid of the law that dictates only a prince can marry the princess. However, Aladdin decides to do the right thing and try to atone for his mistakes by keeping his promise to the Genie by using the wish to set him free. Genie is then officially freed and turned back into a human, much to his surprise, but subsequent joy. He then hugs Aladdin and gives him a heartfelt thank you, as well as decides to marry Dalia and travel the world with her now that he's able to do so. During this segment, he's confirmed to be the fisherman from the beginning who was narrating the story to his two children while they were travelling on their boat, with Dalia being his wife in the background. Meanwhile, the Sultan decides to pass the throne to Jasmine, having seen how much she's truly grown, knows and cares about their people. Now being the Sultaness, she has the ability to change the law herself, and both seeing and appreciating Aladdin for being the essentially good person he is, she gets rid of the law that allows only a prince to marry her and goes after him. Genie is then finally seen attending their wedding with Dalia and participates in a dance party being held at the palace afterwards. 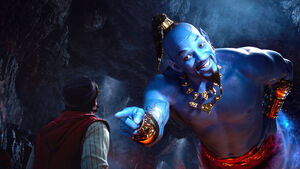 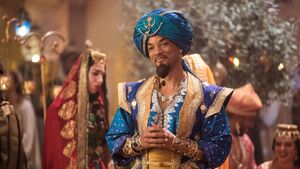