Representative of the Stars

Sidekick
Geno (whose real name is the unpronounceable ♥♪!?) is one of the main characters in Super Mario RPG: Legend of the Seven Stars. He is a warrior from Star Road and is sent by "a higher authority" to restore peace to Mario's world. Although he takes the form of a wooden doll, Geno is presumably a star being (potentially like Starlow).

Geno has a confident and a defiant, heroic attitude.

Geno appears as a cameo during a minigame in Little Fungitown's arcade. In the games 3DS remake, he is removed presumably due to copyright issues.

Geno appears as a Downloadable Mii Costume for the Mii Gunner in the Mii Fighters Suit Up for Wave Five.

Geno appears as a legend primary attack Spirit who can be summoned by using cores from Drake Redcrest, Super Star, two attack cores and a neutral core. His spirit battle is a timed battle on the battlefield form of the Mario Galaxy Stage against Sheik equiped with a super scoope with her FS metter charging quickly, Peach, Kirby, Bowser and Mario's minon represents the main party of Mario RPG; Geno, Peach, Mallow, Bowser and Mario. Only sheik need to be defeated to win. Geno's Mii costume returns as a DLC Mii costume. 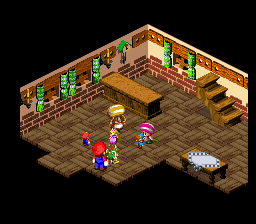 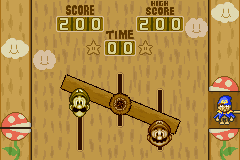 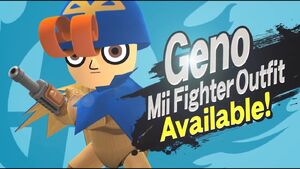