Defend the students of AGHS from the Zodiarts.

Gentaro Kisaragi (如月 弦太朗) is Kamen Rider Fourze and the titular protagonist of Kamen Rider Fourze. He is firstly a second-graded, later third-graded, student, and then a teacher at Amanogawa High School, who has a bad-boy image but seeks to make friends with those he meets at the school by forming the Kamen Rider Club. When he meets Kengo Utahoshi, it starts the chain of events leading to him becoming Kamen Rider Fourze (仮面ライダーフォーゼ).

A second-graded transfer student at Amanogawa High School who looks like a delinquent yankee, wearing a short jacket over a T-shirt and baggy pants, with his hair in a pompadour, rather than the clean cut uniform worn by other AGHS students. Despite his outlandish appearance, Gentaro is very sociable and willing to make friends with almost everyone he comes across, often doing bizarre things to get to know someone he wants to befriend better and going to great lengths to help a friend in need. He puts friendship above anything else and values every friend he has, to the point of crying hard whenever he hears a sad story about a friend. He also has a special handshake he does with his friends and is commonly used whenever Gentaro makes a new friend. The reason he does so is because he wants to see that person he befriends smile, which is the best feeling one could have. He is generally very earnest and very thick-skinned, but can also can actually be very dense and imperceptive. He is also prone to say things other people have a hard time comprehending, due to his unique and bizarre view in things. These quirky qualities are seen by others around him to be both annoying shortcomings and unusual strengths.

On his first day at AGHS, he reunites with his childhood friend Yuki Jojima . After this reunion, Gentaro makes it his objective to befriend loner Kengo Utahoshi, who goes out of his way to avoid him. Gentaro's search for Kengo results with him getting into a confrontation with the head cheerleader Miu Kazashiro and star football player Shun Daimonji until a strange creature Yuki identifies as a Zodiarts appears. Though he appears to have been knocked out while fighting off the Orion Zodiarts, Gentaro sees Kengo's arrival in the Powerdizer exo-suit and later follows him and Yuki to an abandoned part of campus where they enter a locker that transports them to a lunar base known as the Rabbit Hatch where the Fourze Driver, created by Kengo's father, is being kept. Gentaro takes the item after hearing Kengo speak of his difficulty in manning the Powerdizer, and then faces off against the Orion Zodiarts as Yuki instructs him on how to use the driver. Transforming into a figure code-named Fourze, Gentaro is able to defeat the Orion Zodiarts, and he is begrudgingly allowed to keep the Fourze Driver in order to battle the Zodiarts menace. To cement his new friendship with Kengo, inspired by Tomoko Nozama's presentation of an urban legends website she found that details the deeds of Kamen Riders for the previous 39 years, Gentaro forms the Kamen Rider Club while taking up the title of Kamen Rider. Eventually, his club grows in members as does his array of Switches to utilize as he faces off against the group distributing the Zodiart Switches to his classmates: the Horoscopes. However, briefly receiving aid from Nadeshiko Misaki/Kamen Rider Nadeshiko before gaining aid in the Kamen Rider's new club member, Ryusei Sakuta/Kamen Rider Meteor, Gentaro continues to protect his friends as well as his school from the threat of the Horoscopes. Along the way, Gentaro and his friends also befriend Inga Blink as they help her save the world from the Kyodain.

It would be during the end of his first fall term in Amanogawa High that Gentaro and his friends learn the Horoscopes are an inner circle led by Mituaki Gamou, who is not only the school chairman but also was a presumed friend of Kengo's father. As the final confrontation begins, Gentaro learns that Kengo is the Core Child, a construct of Cosmic Energy created from the Core Switch that Rokuro and Gamou reversed engineered to create the Fourze System and the Zodiarts Switches. Though he helps Kengo cope with him leaving to see the Presenters, the alien race that sent him to Earth, Gentaro is forced to watch Gamou end Kengo's life. However, thanks to a letter Kengo left behind, Gentaro resolves to show Gamou the error of ways. Though he succeeds in reaching through to him, Gentaro watches as Gamou's body begins to dissolve into stardust, just as he promises to meet the Presenters in the chairman's stead. Upon learning that Gamou restored Kengo to life, Gentaro reforms the Kamen Rider Club into the Space Kamen Rider Club, with the intent to befriend everyone in the universe.

Five years after his adventures, while his friends are living their dreams, Gentaro became a teacher at Amanogawa High and new advisor of the Kamen Rider Club whose sole member is Miyoko Ohki. However, Gentaro encounters a student name Saburo Kazeta whose psychic powers are being manipulated by a criminal named Banba who is working with the Akumaizer trio. Reunited with his school mates, Gentaro manages to win Saburo's trust by destroying the Fourze Driver to convince the youth that he can change. Though this allowed Saburo become Inazuman and defeat Banba, Gentaro pursues Eel to the past alongside Kamen Riders Meteor and Nadeshiko. Borrowing the Fourze Driver from his past self in his third year, Gentaro aids Kamen Rider Wizard in defeating the Akumaizers while creating a paradox where he possesses the Fourze Engage Ring that made their team up possible.

Gentaro is a second year student in Amanogawa High School, who has a delinquent Yankee-like appearance wearing a short jacket over a T-shirt and baggy pants, with his hair in a pompadour, rather than the clean cut uniform worn by other AGHS students; but is actually really friendly and wants to make friends with people in the school. He is willing to go the extra mile and do bizarre things to get to know someone he wants to befriend better. He puts friendship above anything else and values every friend that he has, to the point of crying hard whenever he hears a sad story of someone he considers a friend. He also has a special handshake he does with his friends and is commonly used when Gentaro makes a new friend. The reason he does so is because he wants to see that person he befriends smile, which is the best feeling one could have. He is generally very earnest and very thick-skinned, as well as not being very perceptive and at times, can actually be very dense. He is also prone to say things other people have a hard time comprehending, due to his unique and bizarre view in things. These quirky qualities are seen by others around him to be both annoying shortcomings and unusual strengths.

Gentaro lives with his grandfather Goro Kisaragi after his parents died in a traffic accident when Gentaro was in third grade. His parents had a job that (as Gentaro stated) went above both his and his grandfather's head, but they were always proud when their son made friends. His father also told him that he needed to keep his friends close because they would eventually help him out in the long run.

Gentaro is shown to become increasingly adept in using the Kamen Rider Fourze system as the series progresses. He is shown to only be able to use conventional fighting moves, and has to rely on Kengo's advice on which Astro switches to use in battle situations early in the series. As he gets increasingly used to fighting the Zodiarts, he learns how to devise strategies on the fly (though they do not always work and Kengo still needs to be around most of the time) and is seen to be using and changing Astro switches more often. He is shown to be very resourceful with the use of Switches as he learns how to utilize each one in unusual ways, such as using Limit Breaks of Launcher, Gatling and Fire Switches together to form a long range Limit Break finisher, and Limit Breaking the Rocket and Drill Switches twice when he cannot finish Scorpio off with just his usual Rider Rocket Drill Kick. When he has difficulty with properly using a Switch, he will take the time to understand it as he did with the Hopping Switch, ending up capable of using it as a weapon instead of just a tool.

Space Technology Organization (外宇宙技術開発機構 Gai Uchū Gijutsu Kaihatsu Kikō, OSTO). Developing technology that enables its user to harness a mysterious form of energy called Cosmic Energy, Rokuro was inspired by his visit to Kyoto and used a hypothetical system its occupants used in ancient times to model the Kamen Rider Fourze system after the Four Chinese Constellations as reflected in the specific symbols on the Kamen Rider's limbs: Byakko (白虎?, Circle), Suzaku (朱雀?, Cross), Seiryū (青竜?, Triangle), and Genbu (玄武?, Square). Mituaki Gamou compares Kamen Rider Fourze's power to that of a gravitational lens, particularly on how the Kamen Rider influences both Astroswitches and Zodiarts Switches.

As a Kamen Rider, the Cosmic Energy protects him even when he is not transformed, thus he is completely immune to certain effects from the Zodiarts, evidenced from him being immune to the Capricorn Zodiarts' trance-inducing music.

In Base Stattes, the Rocket, Launcher, Drill, and Radar Switches are usually used to transform into Base States, but this States can be accessed with any combination of four switches, so long as they are in the right slots. The Limit Break finishing attack for Base States is a Rider Kick called the Rider Rocket Drill Kick,, which uses the Rocket and Drill Modules simultaneously. A variation of this is the Rider Rocket Drill Space Kick, which is performed outside of Earth's atmosphere, using the Massigler to be send both the Zodiarts and Kamen Rider Fourze into lower orbit. When pushing the lever a second time, Kamen Rider Fourze can perform the Rider Rocket Drill Big Space Kick Double Limit Break, where the auras around the Rocket and Drill Modules are enlarged and allowing Kamen Rider Fourze to bore through things his initial Limit Break could not before. However, this exhausts the Cosmic Energy of the Rocket and Drill Switches rendering them inactive until they are recharged. 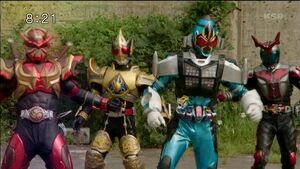 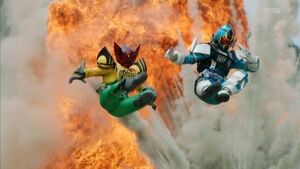 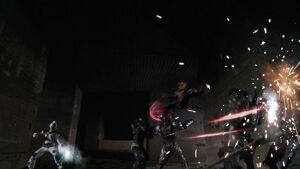 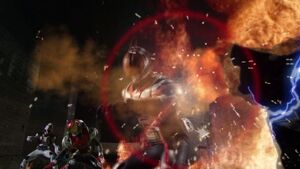 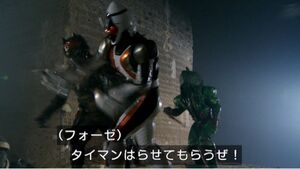 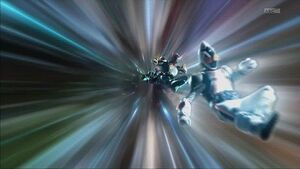 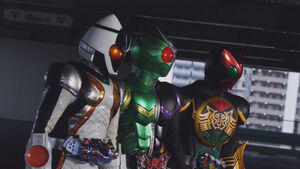 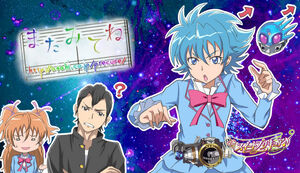 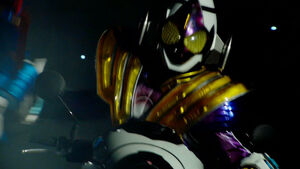 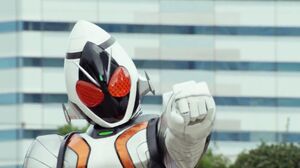