Animal Hero
Gentle Heart Lamb is a Care Bear Cousin who has made several appearances in original 1980's Care Bear media. She is voiced by Luba Goy who also voiced Lotsa Heart Elephant.

She is a mint green lamb whose Belly badge depicts a pink lace-trimmed heart-shaped pillow.

As her name suggests, Gentle Heart is the most shy and soft-spoken of all Care Cousins. While she would never give pause to help others in need, she sometimes becomes fearful when things get wooly, and is hesitant to charge headlong into any situation. Despite this, her fondest wish to be able to share her feelings like her Care Bear friends.

She has a speech trait that involves her sometimes "bleating" her lines and holding out her vowel sounds like a sheep.

Gentle Heart makes her debut appearance in the very first Care Bears feature film, where she is called by Braveheart Lion and Lotsa Heart Elephant to assist their new friends, the Care Bears, in preventing the evil Spirit from removing all caring from the world. Despite not having any special powers, she and the rest of the Care Cousins help their allies seal the villain away for good, and become official members of the Care Bear Family.

In the very first episode of the original Care Bears series, Gentle Heart is one of the Care Bear Family members who travels to Earth to help a boy named Matthew get over his jealousy of his new baby sister. Later, she and a number of Care Cousins have to convince a man named Mr. Johnson to leave work to go see his daughter Patti perform in her school play.

Gentle Heart has her first encounter with the evil Professor Coldheart when he attempts to kidnap all the Care Bear cousins and imprison them in his invisible cage. It is only with the help of a girl named Melanie, who must overcome her chronic daydreaming, that the day is saved and they are freed. Later, the professor tries to destroy Care-a-Lot by staging a mock wedding with Auntie Freeze inside the Hall of Hearts, and uses a special organ to produce destructive notes meant to break the building to shambles. Acting quickly, Gentle Heart plays a different tune on the instrument to put everything back together just in time.

The second Care Bears film tells the story of how Gentle Heart and the rest of the Care Bear Family first arrived in Care-a-Lot after being rescued from the clutches of Dark Heart by True Heart Bear and Noble Heart Horse. While Gentle Heart only appears in a few crowd shots, it can be assumed that she too was captured by Dark Heart later in the film, and eventually helped him to become a real boy.

The Care Bears Adventure in Wonderland

Gentle Heart Lamb has a cameo appearance in the third and final movie.

When No Heart plans to defeat the Care Bears one by one, he takes control of a hedge maze owned by a rich kid named Charles, covers it in giant living thorns, and lures various Care Bears and Care Cousins into it. Separated from her friends, the helpless Gentle Heart is hunted by No Heart in the shape of a large tiger, who nearly succeeds in eating her, until all the Care Bear members throughout the maze fire a Care Bear Stare from all directions. After No Heart's retreat, they eventually make their way out with the help of Charles's friends.

Gentle Heart is one of nine Care Bear Cousins who received a redesign for their 2003 re-launch toyline. Her appearance remains basically the same, but with a larger face and ears, smaller eyes, and an altered red and white patterned belly badge pillow instead of plain pink with buttons. This version has not appeared in any form of 2000's Care Bears media aside from merchandise.

Gentle Heart makes only one appearance in Star Comics' Care Bears series in the issue 3 story "Blue Who?" as one of the Care Bear Cousins who fall under the effects of a strange blue beam that saps them of their strength and cheer. Thanks to the help of the Care Bears, however, they are able to find the source of the problem: a group of aliens known as the Gloomies, and eventually trick them into leaving the planet. 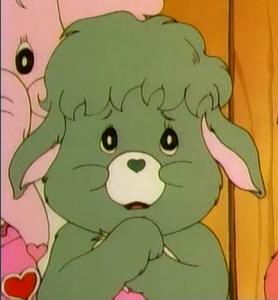 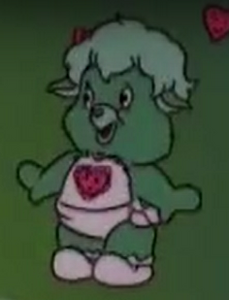 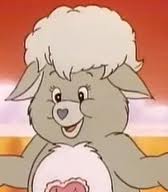 Retrieved from "https://hero.fandom.com/wiki/Gentle_Heart_Lamb?oldid=1837601"
Community content is available under CC-BY-SA unless otherwise noted.