It's a Wonderful Life

Being with his wife Mary Hatch.

Help the people of Bedford Falls.

George Bailey is the main protagonist of It's a Wonderful Life.

He was played by James Stewart (who also played John "Scottie" Ferguson in Alfred Hitchcock's Vertigo) as an adult and Bobby Anderson as a child. He occupies the ninth slot of the 50 Heroes list of the AFI's 100 Years... 100 Heroes and Villains.

He is known as a hero by having rescued his younger brother Harry from having fallen through ice, though it made him deaf in the left ear, and for saving his boss, Emil Gower, from jail time, when he accidentally put poison in a child's prescription, due to him being to distraught from his son's death to pay attention.

His goal is to design bridges and skyscrapers and see the world, but for the good of others, he repeatedly sacrifices his goal. While Harry is in the army fighting in World War II, the only battle George fights is the battle of Bedford Falls.

He is soon married to his childhood crush, Mary Hatch, but to fulfill needs of other people, he sacrifices his and Mary's honeymoon money. Later, he has four children, the youngest of which, Zuzu, is shown to be sick from a cold.

When his Uncle Billy loses $8000 needed for the town Building and Loan, and George doesn't know that the evil Mr. Henry F. Potter has it, he is so depressed that he intends to kill himself by jumping off a bridge into icy water so that his $15,000 life insurance can make up for the money Potter stole. Just then, his guardian angel, Clarence Odbody, an Angel Second Class, jumps into the water, causing George to get him out.

As soon as he wishes he had never been born, Clarence shows him what the world would be like without him: very terrible (revealing that Harry would have died, and that stopped him from saving people in World War II, Mr. Gower would have spent two years in prison, George's children wouldn't have been born, and Mary would have been an "old maid").

George realizes he had a wonderful life, and sadly begs to live again. He does, and even joyfully wishes a "Merry Christmas" to everybody, even to Mr. Potter. Eventually, he becomes the richest man in town. 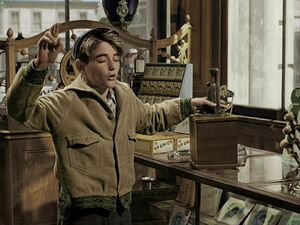 George Bailey as a kid (as played by Bobby Anderson). 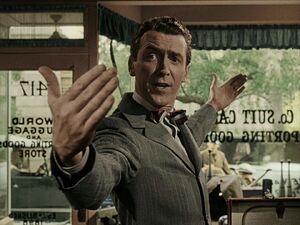 George Bailey as a man, as played by James Stewart.