Be very loyal to his family and work hard to get a raise from Mr. Spacely at Spacely Space Sprockets (succeeded)

George J. Jetson is a fictional character and the main protagonist from the animated television series The Jetsons. He is the father of the Jetson family. He is the husband of Jane Jetson and the father of teenage daughter Judy and elementary school aged son Elroy.

George resides with his family in the Skypad Apartments in Orbit City, in a future with the trappings of science fantasy depictions of American life in the future, such as robot servants, flying saucer-like cars, and moving sidewalks. All the apartment buildings are set on giant poles, resembling Seattle's Space Needle; the ground is almost never seen, though in Jetsons: The Movie, it is suggested that the earth is extremely polluted, thus everyone lives in the sky.

When George was a child, he had to fly through ten miles of asteroid storms to go to Orbit High School, where he was the star pitcher of its Spaceball team and he was a nerd and an outsider of Orbit High School. George is now an employee at Spacely's Space Sprockets, a manufacturer of "sprockets" and other high tech equipment. His job title is "digital index operator." His boss is Cosmo G. Spacely, noted for being short in both height and temper; Spacely usually treats his employees (particularly George) in a rather tyrannical fashion. George's job primarily requires him to repeatedly push a single button (or on occasion a series of buttons) on a computer (named RUDI {Short for: Referential Universal Digital Indexer} in the 1980s series of Jetsonsepisodes). Once, George complained of his heavy work load- having to push a button for one hour, one day of the week! Often, Mr. Spacely will fire George in a fit of anger, only to hire him back by the end of the same episode. The only reason why Spacely re-hires him, because he is the only one who can handle the RUDI computer, without him the Spacely would be out of business without George.

Physically, George is a rather slim man of average height with short red hair and a cartoonishly large nose. His personality is that of a well-meaning, caring father, but he is often befuddled and stressed out by the problems of both his work and family lives. 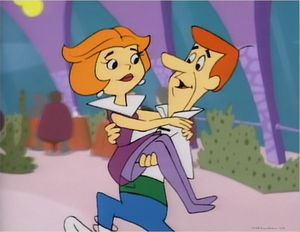 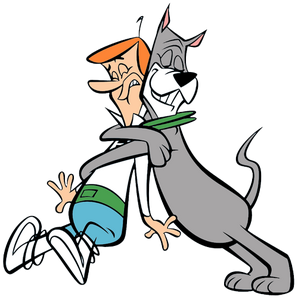 George being hugged by Astro. 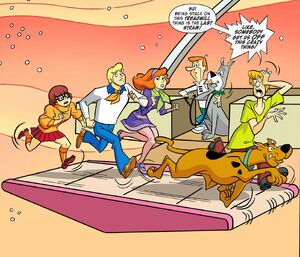 Scooby and the gang stuck on George Jetson's treadmill in the Scooby-Doo! Team Up comic adventures.
Add a photo to this gallery

Retrieved from "https://hero.fandom.com/wiki/George_Jetson?oldid=1490470"
Community content is available under CC-BY-SA unless otherwise noted.