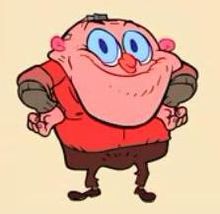 George Liquor is a character created by John Kricfalusi, an ultra-Patriotic American who helps out with Ren Höek and Stimpy from their self-titled appearance in the first two seasons of the cartoon, and also helps out his mentally disabled and incredibly idiotic nephew Jimmy the Idiot Boy and their possible girlfriend Sody Pop in other properties created by Kricfalusi himself.

George Liquor, as he appeared in The Ren and Stimpy Show.

George and Jimmy, as they both appear in an ad for Barq's Root Beer. 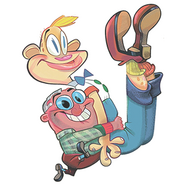 George and Jimmy, as they both appear in Spumco Comic Book.

George Liquor, as he appears in an ad for Raketu. 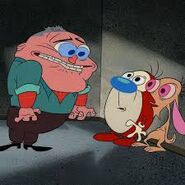 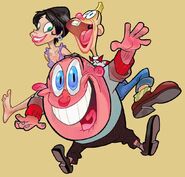 George Liquor, Jimmy the Idiot Boy, and Sody Pop, as they all appear together in many of the properties by John Kricfalusi.
Community content is available under CC-BY-SA unless otherwise noted.
Advertisement