To help and protect his family
Rescue Beethoven from Dr. Herman Varnick
To recover his puppies back from Regina and Floyd (all succeeded)

George Newton is the main protagonist of Beethoven and Beethoven's 2nd, a mentioned character in the 3rd film, and the deuteragonist in the animated series. He is played by the late Charles Grodin in both films, as he was later voiced by the late Dean Jones, who played Dr. Varnick in the first film, in the short-lived animated series.

George is reluctant to own the escaped St. Bernard  and doesn't want the responsibility of owning a dog, but his wife, Alice and their children plays a portion of Ludwig van Beethoven's Fifth Symphony and he barks along; thus they name him "Beethoven"

While George focuses on Beethoven's negative qualities, the rest of the family grows attached to him. However, George becomes increasingly jealous of the affection he receives, feeling as though he is being neglected as the family fawns over him. His frustration comes to a head when Beethoven's antics ruin a barbecue he is hosting for Brad & Bree who are venture capitalists looking to invest in his company, but are trying to secretly swindle him.

The family takes Beethoven to a local veterinarian, Dr. Herman Varnick for a routine medical examination and immunizations. They are unaware that he is involved in unethical and deadly animal experimentation and hired the two thieves, Harvey and Vernon. Varnick urges them to leave him there overnight, but they refuse. He speaks to George alone and gives him false information by claiming St. Bernards are naturally aggressive (in reality they are the opposite except for Cujo but only because of his condition) so that George will have Beethoven removed for his family's safely. Subsequent to the vet visit George tells that "any kinda wierdness and he's gone" but Alice makes light of the by saying "what should I watch for hon, wearing my clothes around the house?" .

Varnick then visited The Newton home on the premise of a follow-up on Beethoven's rabies shots and tricked them into believing Beethoven had bitten him by using scissors to tear his shirt sleeve and applying fake blood to both him and Beethoven's snout—he then hit Beethoven repeatedly to provoke him into lunging at him. Emily, who saw Dr. Varnick hit him, protests that the attack was fake, but George, fearing for his family's safety, takes him to Dr. Varnick's office. It is on the way there that George discovers his own affections for him; he remembers his father had to take their dog to the vet to be put down and he never forgave him for it. He fears that his own family will hate him now for taking Beethoven to be put down. Sure enough, when he returns home with the empty leash and collar, his family looks at him and leave the dinner table rather than remain with him (with Emily calling him a "Dog Killer").

Later, after recognizing the children's sadness and having a conversation with Alice in which she suggests that they believe their own child, George reluctantly agrees to speak to Dr. Varnick again Dr. Varnick claims that Beethoven has already been put down. The children are distraught, but George is upset and reminds him that he had been told that this would not happen until the next day. George notices that Dr. Varnick has no bite marks on his arm and therefore the attack was fake. Realizing he's being tricked and double-crossed by the vet, George furiously demands Varnick to tell him where Beethoven is, but Varnick refuses saying that he ordered Beethoven to be destroyed and threatens to arrest them for assault. George punches Varnick in the face before leaving to find Beethoven. George & Alice call the cops but they show no interest in intervening—they proceed to follow Varnick to his testing area.

When the family arrives at Varnick's lab, George sneaks up to the roof and sees Varnicks cronies having just subdued Beethoven. Varnick is preparing to shoot Beethoven, but is distracted when George smashes through the skylight—Varnick proceeds to try and shoot George for interfering with a sad look on his face. Before he can however, Sparky the Jack Russell terrier bites the evil vet in the crotch—causing him to scream and misfire.

At this point Ted, who heard the gunshot smashes into the area using the family car and during the chaos launches numerous syringes at Varnick, sedating him—Beethoven and the other dogs are freed and proceed to chase away Vernon & Harvey who tried to escape to the junkyard only to find out that they were about to be viciously maimed by a pack of Dobermans guarding the yard.

George is seen at the end watching Varnick & His cronies getting arrested for animal cruelty and attempted murder and his family being interiviewed. Then eh goes to bed with Alice, Beethoven, and all the dogs they rescued.

George Newton and his family are well adjusted to living together with Beethoven. Before going to work, while talking to Beethoven, a newspaper boy throws a newspaper into his coffee spilling into his dress, causing him to scream in pain and informs Alice that the newspaper kid threw the paper into his coffee spilling into his dress and needs to change. Taylor Devereaux arrives to pick Ryce to go to school and greets George Newton. After they left, Beethoven wanders into a park where he meets a female St. Bernand named Missy owned by Brillo. Regina the ex-wife of Brillo and her new boyfriend Floyd pick Missy and she informs Brillo to call her lawyer if he wants Missy. George and Alice are at work showing their boss a bad smell laundry to him.

Later, George discovered that Beethoven has now children and reluctantly agrees to keep them and decides to take his family to in a lakefront house at the mountains owned by George's business associates and Beethoven and the puppies are somehow calm down and are enjoying.

At the fair George Newton and Beethoven are participating in a burger eating contest, they won thanks to the two friendly teenagers. While recovering from the contest, Regina and Floyd arrive at the fair and Regina snatches the puppies from Ted and Emily telling them that she will also take Beethoven too, while Beethoven frees Missy from Regina's car. Ted informs George that Regina steals their puppies and she also wants their dog Beethoven too. George was shocked that Regina took their puppies and what kind of person she is "taking puppies from kids" and decides to get those puppies back. During the chase Emily finds puppy poop and Ryce touches it and it is, George orders Ryce to wash her hands.

At the wilderness not far from the fair, George and his family finds Beethoven, Missy, The puppies, Regina and Floyd. Floyd then threatens to drop the puppies in the river below. George says the situation not to be ugly and orders Floyd to put the puppy on the ground. Floyd did so, but pokes George in the chest with a stick, but as Regina laughs at George, Beethoven rams into it onto Floyd's crotch in retaliation, causing Floyd to lose his balance and she grabs his hand and they fall into a pool of mud and are then swept away in a river. Alice then asks George if he's hungry.

Five months later, Brillo who overheard what happened at the mountains and what Regina and Floyd was been doing, visits the Newtons with Missy and informs him and his family that the divorce had granted him full custody of her and denied Regina's claim and she and Floyd are arrested for their crimes. Seth who Ryce met at the mountains visits too and the puppies are grown up run downstairs to see Missy and Brillo also apologizing to the Newtons for Regina and Floyd's actions.

George Newton was only mention and does not make an appearance in the 3rd film. A few years after the events of the 2nd film and the event at the mountains following the confrontation with Regina and Floyd, with Brillo apologizing of their actions, he and his family are in Europe and bring his dog Beethoven to his brother Richard Newton and bring him to California and he reluctantly did. When Richard and his family finally reached California for their family reunion, after dealing with 2 criminals name Tommy and William whom were trying to stealed the DVD of The Shakiest Gun in the West, they find their uncle Morrie Newton, but George and his family are not there, due to unexpected important business at Botswana and they need to look out for Beethoven a whole year and George promising them to pay for everything.

George Newton is the deuteragonist in the animated series. He is always reluctant. 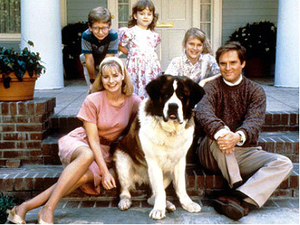 George screaming after finding Beethoven in his bed 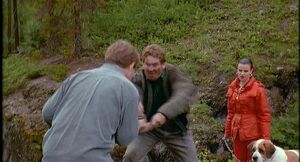 George being poked in the chest by Floyd. 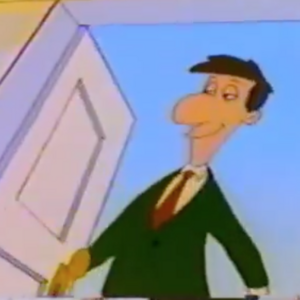