Umineko: When They Cry

George Ushiromiya is a character from Umineko: When They Cry who is the son of Eva and Hideyoshi. He is an affable young man, and is liked by everyone in the family. He is an apprentice to his father's company, and it looks like he finally has dreams of independence. He is the oldest of the four cousins and often acts as a peacemaker.

George is also shown to be a skilled martial artist, just like his mother. His techniques mainly involve strong kicks that can break anything; in fact, in Alliance of the Golden Witch, one of his kicks even broke off half of his own cousin Jessica Ushiromiya's head when they both ended up killing each other courtesy of gaps created by the demon Gaap, whom he was fighting against earlier before this happened.

He is also a playable character in Ougon Musou Kyoku.

In the original Japanese dub, George is voiced by Kenichi Suzumura, whom also voiced Shinn Asuka from Mobile Suit Gundam SEED Destiny. In the English dub, for the upcoming Umineko When They Cry: Gold Edition, he is voiced by Josh Grelle.

George appears as a fairly young man and is described as a typical average man that is not too ugly nor too handsome. He has black curtained, short straight hair and black colored eyes (in later adaptations, his eye color was changed to green). He has bad vision so he is always seen wearing glasses. He is of average height, standing at approximately 170 cm and has pale skin. In the original sound novels he was thicker, but in later adaptations, he was changed to being fairly slim.

George's formal attire consist of a black long sleeved buttoned shirt with a white tie. Over it is a brown vest with the Ushiromiya family crest and over it is a green suit. He also wears green trousers and black shoes. His casual attire in the sound novels and the anime consist of a black jacket, a green sleeveless shirt, and black pants. He also wears a dog tag neck cord. His casual attire in the PS3 version consist of a blue jacket, a buttoned long sleeved light blue shirt, and white trousers. Like in the original version, he also wears a dog tag neck cord. In one ending of Ougon Musou Kyoku, he and Ronove wore the same swimwear attire as Jirou Tomitake in Batsukoishi-hen, which consist of a dark green baseball cap and red trunks.

George is polite and good at resolving a tense situation. He is the only cousin who had not made fun of Maria Ushiromiya for beliving in witches and magic. He is often praised by the other members of the Ushiromiya member to be mature and knowledgeable in many things such as tea.

He loves Shannon and had stated a few times he will do anything to be able to be with Shannon including killing all his relatives. According to Answer to the Golden Witch, were he to find out Shannon's true gender, he would be more than happy to modify his plans to the future with her.

But in school in he had been bullied by other kids and runs aways when he sees other being bullied unless the person is his friends. George also held negative emotions towards Jessica Ushiromiya and Battler Ushiromiya when he was younger thinking that he is superior to them as he thinks they speak in vulgar ways.

Role in the Games

Legend of the Golden Witch

One of the last to die, his death isn't throughly explained in-game.

Even though he managed to meet again with all his close friends in the Golden Land, all the magic came to nothing because of a stubborn fool.

Afterwards, he had even his bones gnawed upon by demons, and went to hell.

Turn of the Golden Witch

At Natsuhi's room, he died by having his stomach pierced by an icepick-type murder weapon.

At the sixth twilight, gouge the stomach and kill. Perhaps, they could have been the second twilight.

Banquet of the Golden Witch

His corpse was found in the mansion's parlor. The weapon is assumed to be a gun or a spear-type object.

In exchange for his soul, the witch gave 8 numbers.

If you say it, a small Golden Land will be opened.

Alliance of the Golden Witch

His body was found by the arbor of the rose garden. There was a single hole right in the center of his forehead. It is probably appropriate to think that he was shot with a gun or something.

That was a brand of disgrace marking his loss to Gaap.

End of the Golden Witch

His body was discovered in the cousins' room on the second floor of the guesthouse.

The direct cause of death is unknown, but his neck was slashed open by a sharp knife.The wound is very deep, so anyone can easily see that he definitely died.

Dawn of the Golden Witch

Alive by the time of game suspension

Requiem of the Golden Witch

Twilight of the Golden Witch

His status depends on the decisions being made and the answers being given. 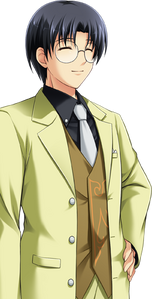 Ougon Musou Kyoku
Add a photo to this gallery

Retrieved from "https://hero.fandom.com/wiki/George_Ushiromiya?oldid=1773251"
Community content is available under CC-BY-SA unless otherwise noted.