Get rid of Oliver (formerly).
Save Jenny from Sykes (succeeded).

Bill Sykes, and Roscoe and DeSoto

Georgette is Jenny Foxworth's pampered pedigree pet poodle and a major antagonist later major heroine in Disney's Oliver and Company. At first, she is jealous of Oliver and tries to get rid of him, but near the end of the movie she has a change of heart and accepts him. She also has a relationship with Tito.

Georgette is voiced by Bette Midler.

Georgette is vain, ditzy, spoiled, cocky, snobbish, rude, arrogant, self-centered, bossy, demanding, melodramatic, short-tempered, over-dominating, and rather selfish, with dozens of pictures of other dogs. She is not really a house-pet (explaining why Jenny would take in a stray kitten as a pet) but a pampered, prize-winning poodle with a whole room to herself in the Foxworth residence. She is incredibly jealous that Oliver is getting any attention, even though she never shows any real emotional attachment to Jenny, and helps the dog-gang rescue him just to get him out of the house.

After Jenny is kidnapped; then rescued, she is later helpful and nice.

Georgette is introduced when Winston, the butler, wakes her up. She makes herself up while singing "Perfect Isn't Easy," a song which emphasizes her vanity, selfishness, and the closest thing to a villain song the movie has. Before entering the kitchen, Winston, who is speaking on the phone with Jenny's parents, warns Georgette not to go inside nevertheless, Georgette ignores Winston's warning and proceeds to the kitchen. When Georgette enters, she's shocked and disgusted to see a cat in the house and eating out of her bowl. Calling for Winston fails so now, Georgette does everything she can herself to handle Oliver with sarcastic questions and finally a scold, telling him that despite the fact Jenny's family owns the mansion, she is the person with most power in the household. Luckily, Jenny comes in after having had a talk with her parents on the phone and tells Georgette that they have approved about her decision of keeping Oliver and that they're going to be "the best of friends."

Over the course of the day, Georgette sees Oliver getting more attention during Jenny's piano lessons while she's singing "Good Company," and decides that she will have to get rid of him somehow herself.

The opportunity comes the next day, when the dog-gang breaks into the house while Jenny's at school and after having distracted Winston. At first, Georgette is frightened, starts panicking and calling for Winston, thinking that Dodger has come for her, but is offended when she learns it's not her he and his dog-gang have come for; thus, giving Dodger an uninteresting education about herself. Then, the rest of the gang enter her room. She is utterly repulsed by Tito's advances towards her, calling him a "bug-eyed creep," and shouts for Winston countless even when the gang cause a mess in it like when Rita notices a picture of a dog named Rex and asks who he is to which she replies: "None of your business!", Francis eating her chocolates while lying on her bed, and Einstein sniffing her powder and then sneezing. However, when she learns that they've come for their cat, she is suddenly more helpful. Before cooperating with the "rescue", Winston manages to get back inside and checks to see if Georgette is alright. Einstein along with Francis are seen hiding under Georgette's bed cover with half of her body sticking out, Dodger and Rita posing as dog statue replicas and Tito hanging on a coat hanger of the door. Winston finds it a bit weird nevertheless he leaves. When Rita suggests that they leave the sleeping Oliver where he is, as he looks so peaceful and he could well be better off there, Georgette hurries them along to get rid of him while convincing them that he's "so traumatized," and when Winston's voice is heard again, she hands Oliver to them in a pillowcase held by Einstein and Francis and then helps them leave down the fire escape. Before Tito leaves, he tries to hit on Georgette; only to get slapped and fall down through the fire escape, thinking that she "likes" him.

When Jenny returns home, Oliver is nowhere to be found. Jenny asks Georgette to help her find him. Georgette pretends to look for him and that she doesn't know where he is while calmly dumping his new bowl in the trash. When Jenny realizes Oliver has been kidnapped after reading a ransom note she found in the mail slot, Georgette snickers (which is misinterpreted as crying by Jenny) but gasps in horror when Jenny decides she's going to get him back.

Georgette is taken with Jenny to find the secret location Fagin (unknown to Jenny) marked, which came with the ransom note, but is just as lost as she is; not knowing that they finally actually reached their destination. After Fagin and Jenny have a small conversation, Jenny turns out to be Oliver's owner with only a piggy bank as payment to get him back and starts crying. It is only when Georgette sees how much Jenny loves him and how sad she is without him, that she begins to regret her selfish actions. Fagin at first has a hard decision about whether to follow his good heart or not then he gives up and pretends to find Oliver in a box and hands him to Jenny. Unfortunately, Sykes, who along with his Dobermans, Roscoe and DeSoto, were unnoticeably watching the whole thing in his car, bursts into the scene, kidnaps Jenny, throws Oliver out the window, and tells Fagin to keep his mouth shut and consider their account closed.

Then, Dodger and the gang come to Oliver's aid. Dodger assures him that they'll "absitively" get Jenny back. The dogs along with Georgette run to Sykes' warehouse without riding in Fagin's scooter this time. At Sykes' warehouse, after Oliver opens a hatch from the inside, Tito suggests "Ladies first," which Georgette finds admirable about him since he has "manners" to which Francis says:"Good grief." The gang do everything they can to avoid their enemies and security cameras (taken care of by Tito). When Georgette screams because of breaking her nail; alerting the evil dogs again (who were first alerted by the noise Oliver made when entering the place), Francis says,"Oh, balderdash," which upsets Tito.

From the top of Sykes' office, Oliver and the dogs observe him talking on the phone to Winston for ransom and Jenny's okay but tied up. Dodger comes up with a plan on how to distract Sykes and help Jenny. The Dobermans are later alerted by their enemies' smell. Tito, Francis, and Einstein distract Sykes by posing as a pizza delivery guy and luring him away, while Oliver and the rest of the dogs enter and try to rescue Jenny. Oliver and Jenny are happily reunited. The rest of the gang run as fast they can to avoid Sykes until they end up in front of Roscoe and DeSoto. When all seems lost, Georgette traps them under a heavy tarpaulin and the gang return to their friends.

Chewing the ropes off Jenny fails and their enemies return, not before Dodger has another idea to get them out of here with a crane and Tito, first reluctant then cooperative with Georgette's persuasion, as the mechanic. They manage to escape, with Jenny, before Sykes and his dogs break down the door, which the gang locked up earlier, in pieces. Things go well until Sykes cuts off the controls of the crane with a fire axe; causing Oliver and the rest to fall and land on a long slide. They slide until they reach the end where, unfortunately, their enemies have them cornered.

When all seems lost and before Sykes can snap his fingers to order his dogs to attack, they hear a honking noise, and breaking in through the window, it turns out to be Fagin with his scooter. Oliver and everyone else jump in and drive away as fast as they can. They seem to be able to outrun the Dobermans but not before Sykes manages to catch up with them in his car. Fagin, having no choice, drives his friends into a subway station but Sykes, driving like a madman, is able to drive in as well. During the climatic chase, Georgette completely panics and is no real help at all. Fagin then drives them through a tunnel with Sykes still in pursuit. When Sykes' car collides with Fagin's scooter, Jenny falls and ends up on Sykes' hood. Georgette still panics while the rest of the dogs are seen barking and growling at their enemies, while Oliver helps Jenny, later Dodger, and Dodger helps Oliver; killing Roscoe and DeSoto. On the Brooklyn Bridge, when Jenny is calling for Fagin's help, he comes to help her while Tito takes command of his scooter; despite Georgette gripping onto him in fear for a while. Sykes manages to grab Jenny's leg and pull her back in, not before Oliver and Dodger jump on him and fight him off; allowing Jenny to jump to Fagin on his scooter.

In front of them, a train is coming their way. Tito is capable of saving everyone by jumping on one of the bridge's cables and driving them to the top but Oliver and Dodger are still in Sykes' car; fighting him. Sykes throws them out until he notices the train heading his way which kills him, thus sending him and his car into the Hudson River. When the rest of the company drive back down, Jenny runs to search for Oliver, only to find a sad Dodger approaching; holding a "thought to be dead" Oliver. At first, everyone thinks he is dead too but when Jenny hears a soft meow from Oliver, she quickly realizes that he is alive and everyone is rejoiced, except Georgette, who is still in great shock from the chase. Then, Dodger and the rest of the gang are accepted as Jenny's new best friends.

The next day, the company is celebrating Jenny's 8th birthday and giving her birthday gifts, mostly Einstein while Tito is teaching Georgette some of his dance moves. When it's time to go, the gang (except Tito) say their good-byes to Oliver and vice versa. Georgette has become attracted to Tito's rough nature and invites him to stay. Unfortunately, her ideas of grooming, bathing, and dressing him up frighten him away, and she is last seen yelling for him to return, which he is unlikely to do. 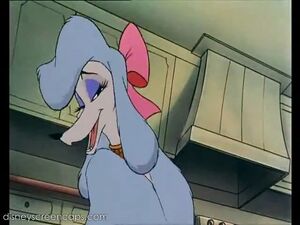