Putting on puppet shows, Making toys, Reading-up on the occult

Gepetto is one of the main heroes from the videogame Shadow Hearts: Covenant and the uncle of Alice Elliot from the first game, Shadow Hearts. He is a French Puppeteer with a studio in Paris that is widely known through-out Paris as a master in his field for both his life-like puppets and flawless performances getting them to imitate human mannerisms on stage.

Gepetto lost his daughter, Cornelia, years prior to the game and made a marionette in her image shortly afterwards to keep her memory alive and use her to bring happiness to people young and old in his tours across Paris. Gepetto also lost his wife just prior to meeting Yuri Hyuga after his and Alice's adventures in the first game. Alice was an exorcist with a powerful link to the divine granting her holy powers and in her travels had met Yuri, who was a harmonixer, a human with the inborn power to transform his body into that of demons he had beaten into submission. Yuri had been traveling to Paris with Alice to meet her aunt and settle down with her but unfortunately Alice had died as the result of a curse she accepted to save Yuri's soul and passed away in her sleep on the ride over. With the lose of his wife, her niece and his daughter Gepetto fell into a depression and took a sabbatical off from his tours. Gepetto watched as Yuri dug Alice's grave with his bare hands and from that moment on knew Yuri would be the closest thing he had to family outside of Cornelia. Shortly after the funeral for Alice Gepetto invited Yuri to his residence in the small village of Domeremy.

The Germans are Comming!

In a little less than a year after inviting Yuri to his forest retreat Gepetto and Yuri found the village of Domeremy was being invaded by the German military. During the on-set of The Great War (World War I). Yuri and Gepetto opted to use their talents to defend the small territory from the Germans, Gepetto by using mystical crests to cast magic through his toys and Yuri by transforming into the Demonic Demi-God Amon. They were further helped by Blanca, who was the pet wolf of a local orrphaned girl named Jeanne. Blanca was an exceptionally intellegent wolf an one Yuri's power allowed him to understand when he offered to help defend the village. While Yuri kept the villagers safe in the Church at the center of the village Gepetto used his toys and puppets to cast magic from a safe distance to slow up the troops and Blanca howled sounding the alarm when the soldiers began to close in. The initial attacks of the Germans were repelled but they would come back a second and third time to attempt to capture the territory.

The second time the Germans came to assult Domeremy they were lead by Lieutenant Karin Koenig, though Gepetto and Cornelia are not to be seen during the opening sequence of the game none of the villagers are around so presumably Gepetto, was just hiding someplace safe with the rest of the villagers to keep them safe- Yuri on the other hand appears as the demon lord Amon to confront the small German envoy. Amon threw aside and knocked out several of the soldiers including Karin but when one of the soldiers resorted to using a grenade Amon dived on Karin to shield her from the blast but was unable to protect the soldiers around her, who were inadvertently killed by the explosion. Having saved at least one of the soldiers Amon drops Karin to the ground and left just before Karin lost consciousness. Karin woke up far outside of town, presumably carried there by Yuri or Gepetto. Karin was found by her troops and brought back to her commanding officer to report on the situation.Karin was assigned the aid of an exorcist from the Vatican named Nicolai Conrad to help with the German Army's demon problem and after a detour to the Vatican to pick up a powerful exorcism tool called the Holy Mistletoe Karin and Nicolai returned to Domeremy with a new German envoy to attempt to recapture the village and defeat the demon.

During the third run into the village the German's encountered heavier security than before. Nicolai made note a wolf was howling in the distance and seemed to be doing so with such regularity he was convinced it was an alarm of some sort to alert the villagers to their presence. The wolf was Blanca, who was indeed keeping watch and sound the alarm for the villagers to stay in their homes but it was also to let Yuri and Gepetto know from where the Germans were striking. Gepetto laid in hiding off in the forest with Blanca and used wind-up toys and puppets as conduits to cast his magic through from various different positions at once and without putting himself in harm's way. Karin and Nicolai clear Gepetto's enchanted puppets out of the way and make their way to the Domeremy Church where they found Karin's fallen men had beeen given a burial in the church's graveyard, Gepetto was not able to keep the Germans from getting to the church but Amon made an appearance again.

In the church Nicolai revealed himself to be an agent of a terrorist group called Sapientes Gladio who were old foes of a man called Albert Simon, a warlock whom Yuri had fought and defeated to get the power of Amon in his previous adventures. Though Yuri made short work of Nicolai at first soon Nicolai upped the stakes by calling in his enforcer, Lenny who had taken Blanca's owner Jeanne hostage after slaughtering the German soldiers outside.Karin realized she and her men had been played and pulled a gun on Lenny. Yuri tried to stop Lenny himself but Nicolai used the distraction to plunge the Mistletoe into Yuri's chest, sealing Yuri's fusions including Amon.Gepetto and Blanca made their entrance once Yuri was subdued and got Karin and Yuri out of the church and to safety out in the forest though they were too late to save Jeanne.

Once in the temporary safety of the Ardennes Forest Gepetto, Cornelia and Blanca waited for Yuri to regain his strength. They introduced themselves to Karin who seemed to be on their side after all was said and done and offered her a chance to escape with them. After evading the Sapientes Gladio foot soldiers known as the Steel Claws Gepetto, Yuri and Blanca set up camp for the night. While Yuri was sleeping Gepetto w as finding out what he could about her. and explained to Karin who they were. Without warning a red light of Malice began to emerge from Yuri's body while he slept and summoned a giant monster Gepetto and Blanca prepared to fight it while Karin desperately tried to wake Yuri up, Yuri woke up just in time to help his friends the monster. After the fight Yuri commented that he had managed to fight off a little bit of the Mistletoe's curse and regain some of his power and accidentally triggered the malice in his sleep.

After making their way out of the forest the heroes traveled to Gepetto's apartment in Paris where Gepetto researched the Holy Mistletoe. Gepetto found a small passage on it in on of his books and said that it was a powerful holy item used for guiding lost souls, (which Gepetto and Yuri were able to deduce was code for killing them). Yuri took the news that the curse was not only sealing his powers but would eventually kill him about as well as expected and began to take his frustration out on Gepetto. Karin broke the two up and said she wanted to help them find a cure to make up for her part in Nicolai's plot. Soon after accepting Karin's hel pthough the heroes were ambushed by some Steel Claws breaking through the apartment windows. Gepetto and the others fought off the Steel Claws but decided to a make their way out of the city. Gepetto used several of his old friends to get out of the city without using the main roads and along the way met two of his old contacts Pierre and Gerard Magimel. While Gerard was a basic wares merchant Pierre was a more specialized tailor who made cloths for Gepetto, or rather for Cornelia, during Gepetto's performances. Pierre and Gerard were won over by the plight of their old friend and by Yuri as his new traveling companion, who they both considered handsome and dreamy, and pledged themselves the heroes as their personal merchants. Gepetto's contacts told him about a wa out of the city through the subway and after a long treck through the winding tunnels the heroes escaped the Steel Claws and focused their efforts on breaking the curse on Yuri and taking the fight to Sapientes Gladio.

Gepetto is a bit of a scholar and know-it-all but also irate and perverse. Gepetto has an eye for beautiful women and is not too proud to be crude and obvious in his attraction to the ladies. Gepetto's attachment to Cornelia often seems somewhat pedophile, until it is confirmed that Cornelia was made in the image of his daughter and he caries her around with him to feel close to her even though she is dead. If the party unlocks the optional dungeon called The Doll House a depth to Cornelia is unlocked. In the ending sequence of events at the Doll House it is revealed that Cornelia's spirit had immigrated to Gepetto's puppet and was indeed close by him at all times, though Gepetto had often thought he felt Cornelia's presence he always assumed it was just because of his own sentimentality. After the events of the Doll House, Gepetto finds out that Cornelia is actually in his marionette of her and thus truely by his side and completely overcomes his malaise.

Gepetto is the one who introduces the Crest Magic to the party and shows them how to use it. Crest Magic is used with crests that are small hand-held seals that symbolize trapped demons. Using a crest allows the mortal holding it to cast magics associated with the demon it seals. Gepetto can cast his own personal magics based on the elements, along with Cornelia, but to use them he needs Cornelia to be wearing specifically crafted arcane dresses; For this he has to upgrade at Pierre's frequently. Pierre will only trade his dresses for gay pornographic magazines and so getting Gepetto new spells unique to him depends on finding the gay magazine key items scattered through-out the game. Gepetto's highest two stats are Power and Intelligence, Power boosts magical resistance and overcoming magical resistance and Intelligence boosts Mana Points and magical special attacks, what this means is not only can Gepetto use spells to high effect and cast them with ease but also that he resists magical attacks himself and can do more damage to the few troubling foes that would resist magic attacks from most characters. The downside to using Gepetto and Cornelia is that they are slow, Gepetto will usually be the last party member to attack and may even be overshot by the enemy. All-in-all Gepetto is a potent spell caster, weak physical attacker, strong magic tank and almost always the last character in the battle initiative. 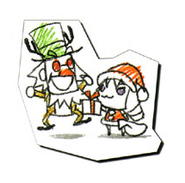 Blue Virgin
Add a photo to this gallery
Retrieved from "https://hero.fandom.com/wiki/Gepetto_and_Cornelia?oldid=1950522"
Community content is available under CC-BY-SA unless otherwise noted.