Heroes Wiki
Register
Don't have an account?
Sign In
Advertisement
in: Articles under construction, Male, Honorable,
and 29 more

Being a Farther to Pinocchio
Creating Toys and Clocks

To have a son (succeeded)

Heroic Creator
Geppetto is the tritagonist in the Disney's film Pinocchio, a loose adaptation of book The Adventures of Pinocchio. He is an old toymaker and woodworker and is based on the character with the same name in the novel.

Unlike the book, he has full of hair on his head instead of being bald, and he lives in a vastly better economical status. He also lacks the poor temper of his original counterpart. However, he still shares the love for Pinocchio and willingness to risk to retrieve him.

Geppetto also served as the protagonist of the ABC telefilm of the same name, as it focuses on him learning the meaning of fatherhood.

He was voiced by the late Christian Rub in the original film, the late Tony Pope in House of Mouse and Kingdom Hearts, and is currently voiced by Jeff Bennett in other media. Geppetto was animated by Art Babbitt.

In the upcoming live-action remake of Pinocchio, he will be portrayed by Tom Hanks, who also voiced Woody in the Toy Story franchise and portrayed Forrest Gump in the film of the same name, Walt Disney in Saving Mr. Banks and Fred Rogers in A Beautiful Day in the Neighborhood.

He is a very kind and caring man.

Geppetto created many toys to bring happiness to many children. As a reward, the Blue Fairy made one of his puppets, Pinocchio, a sentient one and had him become a good boy so he could become a real human boy one day. Geppetto was rejoiced over Pinocchio being alive.

In the 2000 TV film Geppetto, he is portrayed by Drew Carey. He is the main character in that film, as rather than centering around Pinocchio learning to be a real boy, the focus is more on Geppetto searching for him and along the way learning what it truly means to be a father. 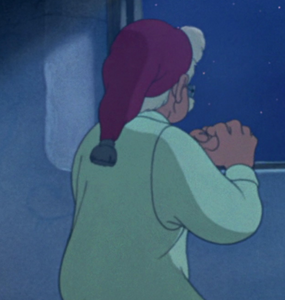 Geppetto wishing on a star 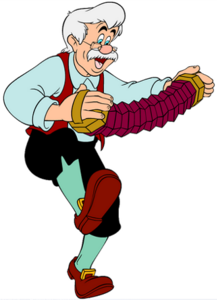