Grandfather of Dr. Eggman and Maria Robotnik
Creator of Shadow the Hedgehog and Biolizard

Spending time with his granddaughter Maria.

Professor Gerald Robotnik (プロフェッサー・ジェラルド・ロボトニック Purofessā Jerarudo Robotonikku) is a fictional character from the Sonic the Hedgehog series who first appeared in Sonic Adventure 2. He was a human scientist and the grandfather of Maria Robotnik and Dr. Eggman. Widely acknowledged as one of the greatest scientific minds of all time, Gerald was responsible for several groundbreaking creations, such as the Space Colony ARK, the Biolizard, Artificial Chaos, the Chaos Drives , and his greatest achievement, Shadow the Hedgehog, making him a modern day scientific Da Vinci.

Over fifty years prior to Shadow the Hedgehog, Gerald was asked to lead Project Shadow, a medical program for researching immortality, which he accepted in hopes of finding a cure for a fatal illness afflicting Maria. While Gerald completed the project by creating Shadow the Hedgehog, though not without taking drastic measures, he was taken into custody by the military when his work was deemed too dangerous. When learning that Maria was killed by the military, Gerald slipped into madness and spend his last days plotting revenge at humanity.

50 years ago, Gerald Robotnik was a respected researcher, considered by many to be one of the greatest scientific minds in the world. At the personal request of the president, he was offered a position onboard the Space Colony ARK by the United Federation, who wished to create "The Ultimate Lifeform", a being that could live forever. The military hoped to use the discovery of an "immortality formula" for weapons research, but Gerald refused the offer, believing that they were crossing the moral boundaries of nature. However, upon discovering that his beloved granddaughter, Maria Robotnik, was terminally ill, he changed his mind and accepted the position, in the hopes that he could use the research to discover a cure for her disease.

Many researchers did not believe the creation of an "Ultimate Lifeform" to be possible, and began to name to project 'Project Shadow' due to it's apparently unreachable goal, as well as the level of secrecy the project required. Gerald liked the name, and it stuck.

Professor Robotnik initially experimented on the Chaos Emeralds and researched the results of applying Chaos Energy to living beings. The experiments proved successful and resulted in the creation of the Chaos Drives, which were used by the military as a power source for their robots. He even learned about the history of the Knuckles Clan and the destructive water being Chaos. Fascinated by the legends, he created the Artificial Chaos series and a shrine similar to the one on Angel Island deep within the ARK.

Progressing on the next stage of Project Shadow, Gerald began experimenting on lizards, due to their ability to regenerate limbs; the result was the prototype Biolizard. Initially showing all desired traits as it matured, the prototype required a life support system fueled by Chaos Drives in order to survive, and it lacked to strength to even walk, despite the strength in its tail and neck. Possessing the mind of a primitive animal, the Biolizard became more unruly and difficult to control as it continued growing. With no choice, Gerald had to encapsulate the creature.

Sometime later, Professor Robotnik came in contact with the extraterrestrial Black Doom, and, using his DNA, created a much more advanced being; Shadow the Hedgehog, who became like a son to him and a good friend to his granddaughter. Upon learning that Black Doom and the Black Arms race wished to harvest the human race as food, Professor Robotnik secretly developed the Eclipse Cannon in order to destroy them the next time they visited Earth.

However, the government soon concluded that Gerald's experiments were too dangerous to humanity, and sent GUN to the ARK to neutralize them. Gerald managed to survive, but was immediately captured by the government and sent to Prison Island, where he was forced to continue his experiments. The government used him as a scapegoat, publicly declaring that the Ark had been shut down due to a devastating lab accident he had caused. GUN later managed to capture Shadow and sent him to Gerald, who discovered that Maria was among the casualties of the raid, and was stricken with grief over how his own research claimed the life his beloved granddaughter, despite the fact that it was meant to save her.

Losing his sanity as well as his will to live, he was driven insane and became obsessed with exacting revenge on humanity for betraying his family. He made plans to send the ARK colliding with the Earth and destroy the planet once the 7 Chaos Emeralds were collected, programming Shadow and the Biolizard to ensure his plan's success. Unfortunately for Professor Robotnik, the government feared that Gerald would soon retaliate and had him executed, but not before the mad scientist left one final recording of his execution, in which he explained his plans for revenge. 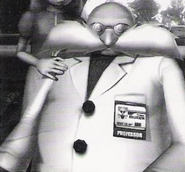 Gerard in life
Add a photo to this gallery

Retrieved from "https://hero.fandom.com/wiki/Gerald_Robotnik?oldid=2077489"
Community content is available under CC-BY-SA unless otherwise noted.