to defeat the snow queen (Successed)

Gerda is the main heroine in the Hans Christian Andersen fairy tale The Snow Queen. In the story, Gerda goes on a perilous journey to save her friend Kai who has been abducted by the Snow Queen. Shards of glass from an evil demon's broken mirror cause Kai to lose his memory and go with the Snow Queen. Gerda must travel the ends of the earth while she encounters a prince, a girl thief, and elderly women who help her rescue Kai from the Snow Queen's realm in the far north. Gerda facing the Snow Queen, in turn, tries to end Gerda's life Gerda meets the Queen's demons who fight with Gerda

Gerda is a brave and willing to overcome any obstacles in order to save Kai.

In the adaption by Russian studio Wizart Animation has also a more strong-willed and firm character as well as being less naive due to the conditions of her previous life and maturity upon to the fourth movie. Gerda is kind and always ready to help her friends as she's purposeful and always achieves her goals. She values the trust and love of her friends and loved ones and is ready to sacrifice herself for them. Gerda sometimes acts recklessly, and is very reluctant to admit her mistakes. However, she believes that she must always do the right thing.

Everything changes when, due to the mischief of the pet weasel Luta, Gerda meets Kai. Not recognizing him as her long-lost brother, she quickly takes interest in him. When she returns to thank him for his help, she overhears Kai's conversation with the troll Orm (Disguised as a dark ferret) and learned that he was her brother. After the North Wind had only taken Kai to the Snow Queen, Gerda ordered Orm to bring her to the Snow Queen, throughout the time they’re together Orm starts to take a liking on the kindness of the young girl and in the end stoods up for her against the Snow Queen and helps her saving her brother, followed by defeating the Snow Queen.

The Snow Queen 2: The Snow King

After the events of the first film, Gerda, along with Kai and Alfida, lived for some time in an unnamed city together, until Orm sent them a letter in which he sincerely tried to convince his friends that he was doing well. Fortunately, the girl immediately realized that something was not clear, and went to help him. When she arrived there, she heard Orm's lies that he had defeated the Snow Queen by himself. Gerda has a dispute with the troll and leaves him alone, later on in the movie she wants to check on him again and finds out he left the kingdom along with former work friends of him to save Princess Maribel to be able to marry her in order to obtain a better life for himself and his grandma and in sadness by Orm’s downhill-going life rejects her help and follows along with the search troop for the princess to look for the palace of the Snow Queen. Gerda is frozen along with her friends in the palast by the Snow King and his minions, but in the end Orm is the one to be able to defeat the villain and unfreeze everyone, apologizes and confesses all his mistakes earning the forgiveness of Gerda, which assured to make him into a “Diamond”

After the reunion of the family, Gerda settled in the capital of the Kingdom ruled by King Harald, and opened a shop of magic mirrors there. Gerda is glad about the reunion of her family, but feels sad, that she’s the only one in the family to not have a magical gift.

When the ruler, King Harald, decides to get rid of all the wizards by sending them to the Mirrorlands, Gerda's family falls into that trap. Trying to save them, the girl ends up behind bars. The ghost of the Snow Queen is summoned from the Mirrorlands by the Lapp Woman to help Gerda out. With her help, Gerda travels to the Troll Kingdom to find the key that opens a magical portal to the Mirrorlands.

After the king has drained the magical lake Gao, the heroes find a living Rollan at its bottom. The guy confesses everyone that he does not remember anything about what happened the last time at their reencounter by the wishing stone. At first, Gerda does not believe him and refuses to forgive him, but after he saves her life in the castle of King Harald, ready to sacrifice his own, the girl cannot control her remaining feelings towards the Spaniard and forgives him. 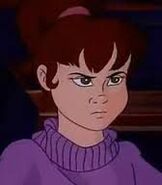 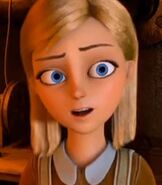 Gerda in Snow Queen: Mirrorlands (With powers)
Add a photo to this gallery

Retrieved from "https://hero.fandom.com/wiki/Gerda?oldid=2249567"
Community content is available under CC-BY-SA unless otherwise noted.