Editor in chief of the Rodents Gazette

Reporter
Adventurer
Knight of The Kingdom of Fantasy

Reading to his nephew Benjamin

Finish his books
Keep the world safe from danger

Rodent Reporter
Geronimo Stilton is the titular protagonist in the popular Italian book and TV series of the same name. He is the editor-in-chief of the Rodents Gazette, the most famous newspaper in New Mouse Island. He loves his nephew, Benjamin Stilton, and his sister Thea Stilton and cousin Trap Stilton.

He is voiced by Brian Drummond, who also provides the voice of Streaky the Supercat and Kevin's dad, Mr. Eddie Whitney, in Krypto The Superdog (TV series).

Geronimo is a quiet mouse who loves to read, especially to his nephew Benjamin. He hates going on adventures, but is always tricked into going on them by his family. Geronimo is also in love with a mouse named Petunia Pretty Paws but is afraid to tell her. Petunia has a nephew, Bugsy Wugsy, who is adventurous and annoying. While Geronimo loves Petunia, there is a Gothic, creepy mouse, Creepella von Cacklefur, who is love struck with Geronimo and wont leave him alone. Despite this, Geronimo admits to finding Creepella fascinating.

Geronimo has a rival, named Sally Ratmousen, who hates Geronimo with a passion. She runs a different newspaper company, the Daily Rat, and she tries to prove it is better than the Rodents Gazette. Sally has a cousin known as The Shadow, who is one of New Mouse City's most notorious thieves. Geronimo occasionally comes across The Shadow throughout his adventures though she usually escapes. So far, he has only caught The Shadow once, but she later escaped. 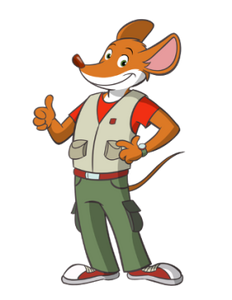 Geronimo Stilton in the television series

Geronimo with his nephew Benjamin 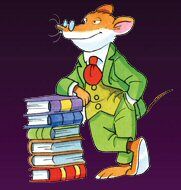 Geronimo in the books 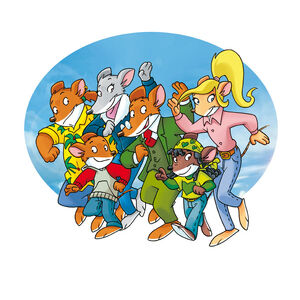 Geronimo with his family and friends