Gertrude "Gert" Yorkes is one of the main protagonists of the Hulu series Ruanways, and is the daughter of PRIDE members Dale and Stacey Yorkes. When learning that her parents were committing sacrifices, she decided to aid her friends in stopping them and PRIDE.

She is portrayed by Ariela Barer.

Gertrude Yorkes was born in 2001 to Dale and Stacey Yorkes, and was childhood friends with Amy Minoru, Alex Wilder, Nico Minoru, Karolina Dean and Chase as they would together. Unbeknownst to Gert and her friends, their parents were members of PRIDE, an organization that committed ceremonial sacrifices for Jonah. Gert later attended the funeral of Gene and Alice Hernandez, and her parents adopted Molly into the family, and Gert became very close to Molly.

Gert later attended the Atlas Academy, and in the eight grade, she was partners with Chase on a astronomy project. She was annoyed with Chase, as she did all the work while he flirted with Eiffel, and she later became attracted to Chase. After Amy's mysterious death, Gert's relationship with her friends became strained, but remained close with Molly. Before the beginning of the series, Gert gained a strong social justice warrior attitude, and displayed no tolerance for any form of discrimination.

At the academy, Gert proposed the creation of a group called the "Undermining the Patriarchy", but her classmates payed no attention for her proposal. Once she finished for her proposal, she overheard Alex inviting Chase for a reunion at his mansion, but the conversation became tense as Gert and Karolina began to argue. When Chase was failing Spanish, Gert suggested that she tutor him, and he agreed to meet her at the Timely Coffee.

Gert waited at the café, but he didn't show up, as his friends Brandon and Lucas told him to come to a party that night. While waiting, Gert told Molly to feed their parents' pet, and she later received a photo of her with Amy and the group from Alex, and decided to go the Wilder mansion. At Alex's home, the group argued over their separation after Amy's death, but were convinced to stay when Karolina suggested they stay and talk over Amy's death. The group decided to enter Geoffrey Wilder's office to collect alcohol, but Alex accidently opened a secret passageway.

Gert and the group found themselves overlooking their parents sacrificing a girl named Destiny Gonzalez, but were forced to flee when Molly took a picture. While Alex cut the power in the mansion to distract their parents, Gert and their others tried to figure out what they saw, and later pretend to play Twister in the guesthouse. When the others suggested that their parents were criminals, Gert expressed disbelief, as she believed her parents couldn't' do anything wrong. The group decided to investigate their parents, but had to act normal around their parents when returning home.

The next day at the beach, Gert and the others doubted that Destiny was in London, as Karolina had supposedly received a message from her. The group decided to find more evidence, and Gert decided to investigate with Chase at his home, and the two found a Dematerialization Box which was used by PRIDE during the ritual. Gert used the X-Ray specs to see if Destiny was inside the box, but found it empty, and suggested that they check the basement of her home due to Molly claiming to have heard noises down there. In the basement, Chase opened the door and a dinosaur came out of the vaulted room, and the two attempted to flee.

Gert had a panic attack and Chase noticed that the dinosaur obeyed Gert's commands of standing down, and Chase comforted Gert. She and Molly later took part in the WizTalk conversation, and was shocked when Nico suggested that her parents murdered Amy. The group decided to continue their investigation, and Gert and Molly overheard Dale and Stacey talking about the missing animal. After witnessing Chase fighting Brandon and Lucas, Gert told Karolina that he was probably protecting her from what happened at the party.

Later on, Gert was approached by Karolina on going to her home find evidence, and the two found an encrypted file on Leslie Dean's laptop and decided to give it to Alex so he could decrypt the file. After giving Alex the file, Gert returned home to find Molly fighting against the dinosaur, and commanded it to stop. When her parents arrived, Gert asked for an explanation on the dinosaur, but her parents were distracted by Tina Minoru's visit. Gert later received a call from Nico informing her that Alex had been kidnapped, and decided to help them with Molly.

After Nico used the Staff of One to find Alex's location, Karolina drove them where they saw Alex being held at gunpoint by Darius Davis. After Karolina and Molly revealed their super powers, Chase Stein came and used his fistigons to knock Darius backward, and Alex was saved. The group celebrated their victory by going to the Timely Coffee, and Alex wanted their help to rescue one of his kidnappers, Andre Compton, who he believed was going to be sacrificed by PRIDE.

The group went to the ritual room but found it empty, realizing they failed to save Compton as he was sacrificed by PRIDE somewhere else. The group fin a camera in the room, and figured out that the data was stored in Wizard severs, meaning they could hack into the company. Afterward, Gert and Molly returned home and visited the dinosaur named Old Lace, and Gert had to accept that her parents were probably evil.

The group's visit in the Wilder Mansion was not in vain, however, since they found a camera in the sacrifice room and figured out that its data were stored in Wizard servers, meaning that they had to hack into the company. Following this discovery, Yorkes and Hernandez returned Yorkes Residence and paid the dinosaur a visit, staying with it in its sealed room and discussing their parents' motives, and Yorkes had to accept that her parents might be evil people.

Gert and Molly went to the Timely Coffee to hear about the group's next plan, which was to steal the video file from Wizard headquarters while attending a fundraising gala. Gert and Molly later went to the Dean mansion to prepare for the gala, and Gert senses that something was going on between Karolina and Nico. At the gala, Gert spoke with Karolina, and said she would support a relationship between her and Nico. Karolina rebuffed that she was only saying that because Gert wanted to be with Chase, but she denied her attraction towards him.

Gert went with Alex and Nico to infiltrate Wizard, and distracted the guards while the others hacked into the servers. While distracting the guards Earl and Kincaid, Gert warned Nico and Alex that Tina Minoru was coming, and later saw them successfully return. Gert later asked Molly did she see Chase anywhere, and her adopted sister told her she saw him kiss Karolina.

The next day, the group spoke to each other, but Molly revealed that she accidently revealed what they saw at the ritual to Catherine Wilder. After the open house, Gert met with the others and learned that Alex decrypted the file, and agreed that their parents should be placed behind bars. Back at home, Gert realized that her parents were sending Molly to Montebello with her second cousin, much to Gert's dismay. When noticing that her parents hadn't return from Montebello, Gert received a call from Karolina, and the two agreed to meet up and go the Stein mansion.

Gert and Karolina went to the Timely Coffee where Alex and Nico awaited for them with the decrypted file, but Chase argued to not release it, as he believed his father would die. Chase and Alex then got into a fight, and Chase destroyed the laptop, thus they lost their evidence against PRIDE. The next day, the group nearly disbanded, but decided to stay together to take down their parents. When Molly returned from Montebello, she showed the group that she had found her parents' VHS tape, and the group watched. The tape showed Molly's parents warning whoever watched it that PRIDE was drilling into the core to find a mysterious power, and that doing so could cause massive destruction.

When Karolina ordered them to leave while she dealt with Jonah, the group escaped and Karolina was captured. After hiding in the woods, Gert and the Runaways decided to rescue Karolina and Gert told Old Lace on how to survive, and that they would meet again one day. When the group were accused of murdering Destiny Gonzalez, Alex told his friends that they had to go on the run. 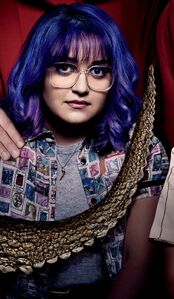 Gert in season one. 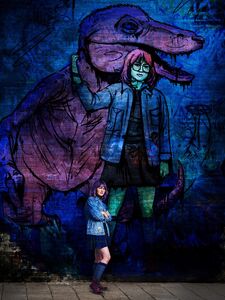 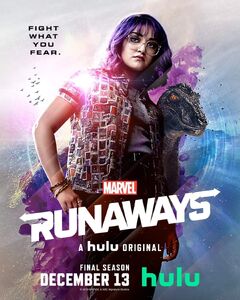 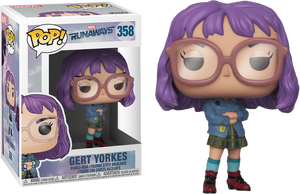