She is known to be the master of martial arts and she teaches Arnold self-defense from a mugger. She helped Arnold to save his treehouse from Big Bob, and helped him save the turtles from torment by children. She also try to save Arnold from being stuck in the subway bus.

She is voiced by Tress MacNeille also voiced Charlotte Pickles and Tandi.

Gertrude usually acts younger than she appears. She is a martial arts master according to Gerald. She taught Arnold self-defense in "Mugged" and helped him save a turtle from constant torment from the elementary school children in "Field Trip" episode. She is often the only person who understands Arnold. She is very upbeat, and takes any situation with the same enthusiasm as any other. This was best shown in "The List," where Arnold failed attempts at having "the perfect Saturday" are compared with Grandma Gertie's attempts to get her piano moved into the house. In the end, she has the piano put on the roof (where it stays for the rest of the show), and she and Arnold share a song about how you shouldn't let the little problems get you down. 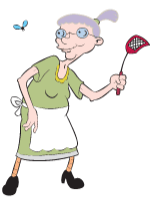