Playing games such as Fullstasis

Getaway, also referred to as Breakaway is an Autobot escape artist and Powermaster, and a minor character from Marvel's the Transformers comics. Getaway was reputed to remain calm and rational, using logic and finesse to get out of the worst situations.

In the past, according to his toy bio, Getway gained his reputation from the Armournecking incident during the war on Cybertron. While leading a routine patrol on the Titanium Turnpike, Getaway and his squad slowed down (known as armournecking) to witness a intense traffic accident. After being ambushed by Decepticons who had set it up, blowing out Getaway's tires and his headlights and losing his shotgun, he still managed to tactically retreat to Polyhex Toll Plaza. Getaway rightly suspected that while the Autobots were able to pay their enegon tolls, the Decepticons did not have the correct currency. With the Decepticons ensnared by the tolls security systems, Getaway's Autobots were able to defeat them, with Getaway gaining respect for his cunning.

As a member of Fortress Maximus' crew aboard their ship, the Steelhaven, in Totaled, Getaway, along with Slapdash and Joyride, were left as a skeleton crew aboard the Steelhaven during a battle for Autobot leadership held on Earth's Moon. However after the Decepticons made a surprise attack, Getaway and his team managed to protect the ship. Later, now joined by Goldbug, Getaway and his team took the ship to Nebulous to revive Optimus Prime.

After reaching Nebulous, in People Power, Getaway and the crew met the scientist Hi-Q, who admitted that he had been charged with converting the Nebulous fuels supplies into substances poisonous to Transformers, and that the Decepticons Darkwing and Dreadwind had been rendered inert. Unfortunately, corrupt Nebulans Hi-Test and Throttle had become Powermasters and binary-bonded with the two Decepticons. With them being unable to consume Nebulon fuel Getaway and the crew tried and failed to stop the Deceptions in their weakened conditions. After Hi-Q and his staff were convinced of the Autobots nobility, they underwent the Powermaster process, with Getaway binary-bonding Hi-Q's assistant Rev. Through this transformation, the Autobots succeeded in restoring Prime and drove the Decepticons off Nebulos. Their new Nebulan partners chose to return to Earth alongside Getaway, Prime and the others.

In The Cosmic Carnival, Getaway was left aboard the Steelhaven while Optimus Prime and Goldbug checked out the carnival where Sky Lynx was being held prisoner. In Cold Comfort and Joy, Getaway and the other Powermasters accompanied Optimus Prime down to Earth. With their leader in ponderous mood, the trio set out on their own to investigate an apparent Decepticon attack on a human town, only to learn it was merely a panic caused by the appearance of Sandstorm, Broadside and Inferno.

Getaway often appeared in the UK annual stories. In Dreadwing Down, he and the other Powermasters ventured into the water and battled the Seacons in order to recover a fuel cell from a crashed Dreadwing, needed to cure an injured human. In Prime Bomb, he played a key role in defeating Scorponok's plan to kill Optimus Prime with a sentient bomb. In Trigger-Happy, he helped search for an AWOL Backstreet.

In Fallen Star, he was sent to spy on the Decepticon base with Cloudburst and Chainclaw. Encountering the recently resurrected Starscream, they attempted to retreat only to end up on the receiving end of a beating from the insecure Decepticon.

Getaway was involved in the aftermath of the disastrous attempt to recover the Creation Matrix to use against Unicron, which ended with Thunderwing attacking the Autobots with the Matrix. Optimus Prime thus decided to surrender his command to Scorponok in the hope of forming an alliance against Unicron.

Getaway and the rest of the Earth Transformers were subsequently summoned to Cybertron by Primus to help defend the planet from Unicron. He was among the survivors of the battle and travelled to Klo with the other Autobots to try and halt a Decepticon invasion. The Autobots were ambushed and massacred, with Getaway being blown apart by his old enemies Dreadwind and Darkwing. He was likely resurrected by the Last Autobot.

In the version of the 21st century where Galvatron led the Decepticons to victory, Getaway was one of the surviving Autobots. While heading for Autobot City on Earth in Shadow of Evil, the Autobots found that their ship had been sabotaged and it crash landed. Getaway's body was seen in the wreckage as the surviving Autobots faced a Unicron possessed Rodimus Prime.

In a timeline where Galvatron's forces had successfully taken over Earth after the events of the Movie, Getway was among the seven last Autobots. Getaway, Guzzle, Chainclaw, Prowl, Inferno, Crossblades, and Jazz participated in a last-ditch effort to show the rest of the world that there remained resistance against the Decepticons in the United States. However, after Getaway saw Cyclonus and Scourge being so casual about their victory, he could not stop himself attacking them ahead of schedule. This led to Guzzle and Chainclaw having to join in the fight, and all three were killed, but the rest of the Autobots managed to succeed in their mission.

Getaway made a minor appearance in Dreamwave Productions short-lived Transformers comics. In The Age of Wrath, Getaway was one of the few Autobots not imprisoned by Megatron's forces when he took over the planet. Getaway acted as bait for a squadron of Decepticon drones, and were ambushed by Nightbeat's squad, as part of a plan to capture one of them. After the squad defeated two of them, the last remaining drone shut itself down. When it turned out to be a ruse, and it fought off the Autobots with upgraded weaponry, Getaway managed to stop it executing Slapdash with Nightbeat's inhibitor claw.

Breakaway was an Autobot escape artist who was a minor character in the Transformers Film Series' IDW prequels. As seen in Defiance Breakaway was part of Optimus's Science Division working on excavation site LT34 near the temple of Simfur. He was present when the team excavated an ancient relic and witnessed the argument between Optimus and Protector Megatron. He was loyal to Optimus's side when Megatron turned to tyranny.

After the events of the first movie, in The Reign of Starscream, Breakaway was part of Arcee's Cybertron-based team of Autobots who opposed Starscream's plans to rebuild the AllSpark. Breakaway, along with Strongarm and Wingblade opted to assault Trypticon City as a distraction so Arcee could rescue the Autobots captured to fuel the AllSpark's reconstruction.

Breakaway made a cameo in Tales of the Fallen alongside Clocker, and they accompanied Arcee on a mission. Thundercracker attacked their ship and they landed on an unknown planet. Arcee lost consciousness thanks the crash, leaving Breakaway and Clocker to fight Thundercracker. The two were killed by the time Arcee came back online. 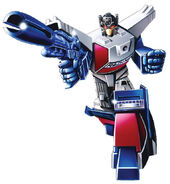 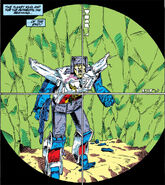