Gex is a gecko and the titular main protagonist of the video game series of the same name.

He is voiced by Dana Gould in North America. The European version features three actors as his voice; Dana Gould in the original game, Leslie Phillips in the first sequel, and Danny John-Jules (who also played Cat in Red Dwarf) in the final game.

Gex is a smart alec, wise-cracking gecko. He lives with his family in Maui, Hawaii and spends his days with his friends, surfing, playing the ukulele and throwing poi parties down on the beach with the local lady lizards. After his father dies, he begins watching mass amounts of TV to get over the tragedy. He eventually inherits over twenty billion dollars from his deceased uncle, and buys the world's largest television. He has his own island hideaway called the GEXCave located in the South Pacific. His catchphrase is "It's tail time!".

Gex and his family lived in Maui, Hawaii. His mother raised him and his three siblings while his father worked at NASA. One day, Gex's mother got a phone call saying that Gex's father and his co-workers had died in a rocket explosion. Rather than grieving, Gex bottled up his emotions, and sat in front of the TV.

Gex's mother decided that it was time for a change, she told the whole family that they were moving to California. Week after week of Gex watching TV, his mother decided to take action, and sell the TV. This infuriated Gex so much that he decided to leave his home, and never return. For the next few months Gex slept in his friend's garage, and made money by doing odd jobs.

One day, Gex's mother found him and had fantastic news. Gex and his family had inherited over twenty-billion dollars from his late Uncle Charlie. With the money, Gex bought a mansion back in Hawaii and the largest screen TV in the world.

As seen in the game's opening, Gex was watching his enormous TV one day, when a fly buzzed by his head. Gex flicked out his tongue and swallowed it. Unknown to Gex, the "fly" was actually a metallic transmitter. Suddenly, Gex's remote jammed and the TV went blank. A huge hand shot out of the screen and grabbed Gex by his neck, and pulled him into the Media Dimension. The cold claw belonged to Rez, the overlord of the Media Dimension, who had intended to make Gex his new mascot and conquer the world.

Gex managed to find the hidden remotes in the strange, television worlds. Gex made it through a disturbing cemetery, an odd cartoon land, an enormous jungle, an ancient Chinese village, the mysterious Planet X, and Rezopolis, the capital of the Media Dimension. Gex made it into Rez's inner sanctum and battled him head-to-head. Using one of his own mechanical bugs, Gex defeated Rez, and made it back home in time for his shows. Rez transformed into a ball of energy and escaped.

Events in Enter the Gecko

Three years later, Gex is still living in Maui and still greatly enjoys watching TV. Eventually, every day began to seem like the same one over and over again. Gex was on the verge of insanity. One day, the TV goes blank for a few seconds, then flashes Rez's image over and over again.

Two government agents show up at Gex's house, requesting Gex's help. Gex denies, saying he's already saved the universe once. One of the agents then beats Gex over the head with a crowbar, knocking him unconscious.

When he wakes up, he realizes he is in an interrogation room. The two agents ask Gex what he knows about Rez, Gex tells them everything. Once again they ask for his help, one of the agents reaches under the table and pulls out a briefcase full of cash, as well as a secret agent suit. Gex finally agrees to help them. The two agents give him a map, and say they want Rez to "disappear", instructing him to hide the body between Jimmy Hoffa's and Spuds MacKenzie's.

As Gex leaves the building, a beautiful female agent walks up to him, and introduces herself as "Agent Xtra", she wishes him good luck and leaves. Gex then leaves to the Media Dimension.

Once Gex is in the Media Dimension, he navigates through several channels. Toon TV; Scream TV; Rocket Channel; Circuit Central; Kung Fu Theatre; The Pre-history Channel; Rezopolis; and Channel Z. Once Gex navigates through Rezopolis and Channel Z, he fights the overlord again. By dropping a large TV on top of him, Gex defeats Rez. Rez once again transforms into a ball of energy, and is then trapped in the same TV Gex dropped on him. Rez begs him to let him out of the TV, he even bribes him, but Gex shuts off the TV.

Gex is last seen in a hotel room with Nikki, from the Pandemonium video games.

After defeating Rez a second time, Gex retreats back to his mansion in Maui, which was looked after by his newly hired butler, a tortoise named Alfred. Gex is watching the news one day, when Agent Xtra contacts him through his TV. She says that Rez has kidnapped her, and she is trapped in Rezopolis. Gex uses a secret entrance to the Media Dimension, that he calls the "GexCave".

Gex navigates through all new channels. Holiday; Mystery; Ancient Egyptian; Army; Western; Pirate; Greek Mythology; Fairytale; Anime; Mafia; Superhero; and Channel Z. Once Gex collects all the remotes, he travels to an enormous Space Station above Earth, and battles Rez. Unlike the previous two times, Rez did not transform into a ball of energy, instead he exploded into several pieces, possibly meaning that he is truly dead.

Gex is last seen in a hotel room with Agent Xtra, who is telling him about her time in the Media Dimension. Alfred contacts Gex, saying there is an emergency, however Gex disconnects the computer and ignores him. 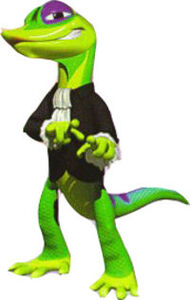 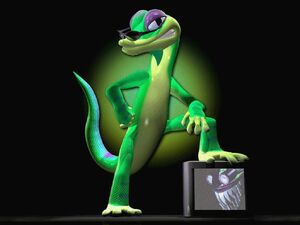 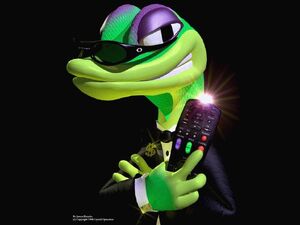 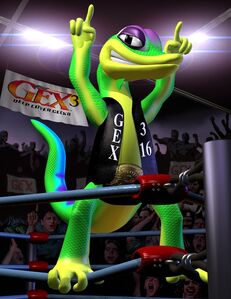 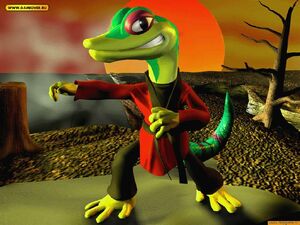 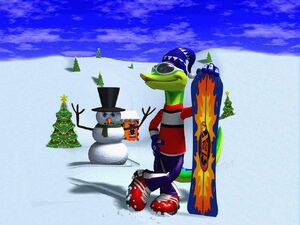