Ghira Belladonna is a major character in the animated web series RWBY he is the Chieftain of Menagerie, the Husband to Kali Belladonna and father of Blake Belladonna and was the first high leader of the White Fang before stepping down from his position in which Sienna Khan became high leader after him.

He is voiced by Kent Williams.

Ghira appears as a muscular male Faunus with light skin, yellow eyes and black hair with a big black beard his outfit consists of a purple trench coat with white fur that's open revealing his chest, a metal arm guard, 2 armor plates between his waist and chest and tan pants with sandals.

When Ghira was high leader of the White Fang his Beard and hair were shorter and he wore a purple open shirt with light purple sleeves and a big white fur collar, 2 shoulder guards connected by a leather collar, 2 leather straps going across his chest connected by a metal White Fang emblem, brown fingerless gloves, tan pants, and brown boots.

Ghira's Faunus trait are a pair of Panther claws that can retract from his fingertips.

Before the events of the series Ghira founded the White Fang in an attempt to make peace between humans and Faunus however while most humans were beginning to accept Faunus there were some who still didn't agree with Faunus rights. One day Ghira was attempting to pass through a town with other white fang members including Ilia Amitola, Sienna Khan, and Adam Taurus when a group of humans armed with revolvers began shooting at the White Fang members Ghira attempted to plead with the humans stating that they didn't want any trouble when one shot Ghira in the shoulder, causing Adam to begin to attack the humans after subduing most of them Adam notices one about to shoot Ghira and uses his semblance to kill him causing the other humans to run away in fear with one saying "You're all freaks!". Ghira then begins to berate Adam for murdering the human before Sienna interrupts him saying that Adam saved his life as the other White Fang members begin hailing Adam as a hero.

Eventually Ghira stepped down from his position as high leader of the White Fang with Sienna taking his place after Ghira left his wife Kali left with him, while their daughter, Blake stayed in the White Fang however she eventually left as well. After hearing about the Fall of Beacon Ghira began to greatly worry about his daughter he would pace around waiting for her, and one day Blake arrived home with her friend Sun Wukong whilst Kali liked sun, Ghira wasn't too fond of him even openly stating "I really don't like you" on multiple occasions. Ghira soon meets with the Albain brothers, members of the White Fang, after Blake exposes that the White Fang was responsible for the fall of Beacon Ghira grows suspicious whilst the brothers claim that it was Adam's group who orchestrated the violence and that their actions weren't approved upon and the brothers soon leave.

Blake later meets with Ghira in his study where the 2 share conversations about there pasts before being interrupted by Sun. Later after Sun and Blake recover Ilia's scroll and they discover Adam's plan to take over the White Fang and destroy Haven. Ghira reveals he has Ilias scroll and questions the Albain brothers about it however due to lack of evidence the pair walks free. Later the White Fang, under Adam's orders attack the Belladonna mansion with Ghira, later joined by Sun, taking on the Albain brothers. Their fight leads them into the study where Blake is fighting Ilia. Fennec is able to stab Ghira in the back but Ghira just throws him off and fights Corsac hand to hand. Ghira sees Ilia under a balcony about to collapse he runs and supports the balcony so Ilia can escape as the balcony begins to collapse with Sun supporting the balcony with his semblance so Ghira can escape however as Ghira escapes Fennec makes an attempt to lunge at Ghira only to get caught under the balcony and crushed.

After the Battle Corsac and all the other surviving White Fang members in Menagerie (with the exception of Ilia) are arrested by Saber Rodentia and the Menagerie Guard and Ghira leads the Faunus of Menagerie to Haven against Adam whilst also contacting the Mistral Police as the White Fang members accompanying Adam surrender and Adam retreats. After the battle of Haven Ghira makes plans to start up a new Faunus rights movement to succeed where the White Fang failed after seeing his daughter off to Argus. 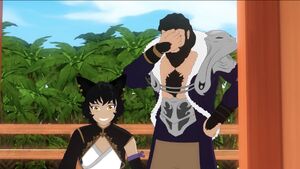 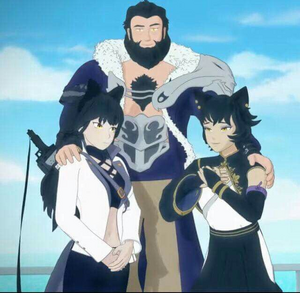 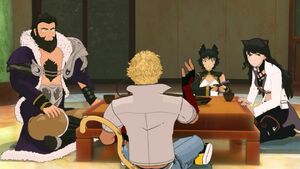 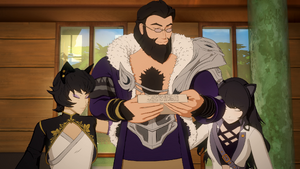