Playing with The Mary Janes.
Going through different Dimensions.

Exploit and get Attention (at first, formerly).

Created by Jason Latour and Robbi Rodriguez, the character debuted in Edge of Spider-Verse #2, as part of the 2014–15 Spider-Verse comic book storyline. This led to the ongoing series Spider-Gwen that began in 2015.

The character is a variant of Spider-Man and an alternate-universe version of Gwen Stacy. She resides in what Marvel official nomenclature dubs Earth-65, where, instead of Peter Parker being bitten by a radioactive spider and becoming Spider-Man, Gwen Stacy is bitten and becomes the superheroine Spider-Woman.

The character is featured in other alternate universes and appears in other Marvel media such as an animated television series and video games, and in merchandise such as action figures.

In the alternate reality, the radioactive spider bit Gwen Stacy rather than Peter Parker giving her the abilities of a spider. She goes by the name Spider-Woman and much like Spider-Man of Earth 616 used her newly found powers to for more personal gain rather than helping people by becoming a professional drummer. Peter Parker remained a weak individual that Gwen needed to save from bullying.

This made him develop an inferiority complex causing him to create a serum to make himself more like Gwen after she has revealed to him her powers. This causes him to become Earth 65's version of the Lizard and Gwen is forced to fight him. Unfortunately, due to the serum during the battle, Peter dies and she vows to use her powers for good. Additionally, Gwen is blamed for Peter's death and a campaign against her (spearheaded by J. Jonah Jameson) is started.

Gwen is the drummer of a band named the Mary Janes (Which includes Mary Jane Watson, Glory Grant, and an unknown third member) although she is often late for practices and concerts. While out fighting crime she is also targeted by the police force who is being commanded by her own father Captain George Stacy.

Due to Captain Stacy's success against organized crime he a hit is placed on him by the Kingpin who uses his lawyer Matt Murdock to hire hit man Aleksei Sytsevich (who in the regular continuity is the villainous Rhino). Aleksei tracks Captain Stacy down at a Mary Janes concert and attacks him there, Gwen steps in and is able to defeat him but is cornered by her own father. There she reveals to him that she is Spider-Woman and he allows her to escape.

Gwen is recruited to take part in the Spider-Verse event where Spider-Men from every reality is being hunted down by Morlun and his family. She is one of Spider-Man's (616) right-hand members but he is unwilling to risk her in dangerous situations since he couldn't save his own Gwen Stacy. They promise to look after each other's backs.

Spider-Woman is depicted as having similar powers of Spider-Man which originated from a bite by a radioactive spider. These power include sticking and climbing on walls, a sixth sense to danger (that she has yet to master) and being able to lift approximately 10 tons.

She owns web-shooters that were given by her and created by retired crime fighter and billionaire mogul, Janet van Dyne. The mechanisms help filter moisture from the air that help create an adhesive web-fluid that can create web nets, ropes and globs and many other shapes. They also help her swing building to building. The web-shooters do not require refill as long as moisture is present. She also has a possession of a wristwatch that helps her travel to other multiverses due to the "Spider-Verse" events. She is commonly depicted as using her smartphone for superhero equipment.

Being the daughter of police captain, George Stacy, she is depicted as having detecting skills and analytical thinking. She's untrained in fighting and only picked up on fighting from kung fu films. She's also depicted as being skilled at being a drummer. 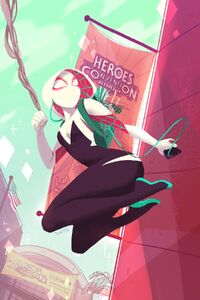 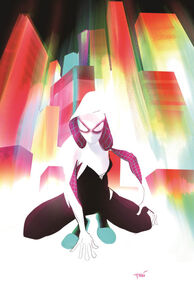 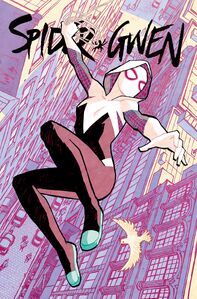 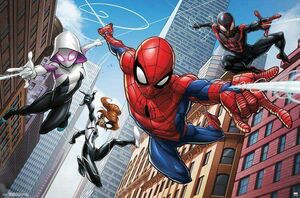 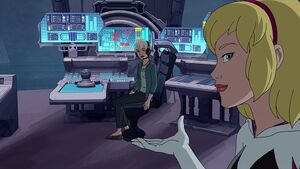 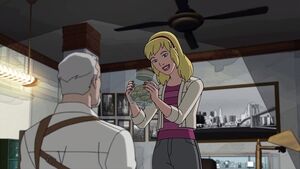 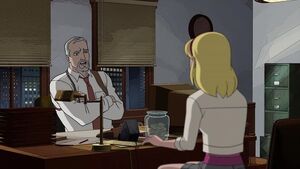 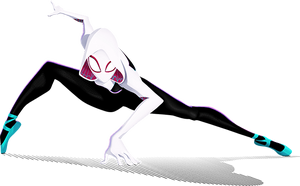 Spider-Gwen in Spider-Man: Into the Spider-Verse. 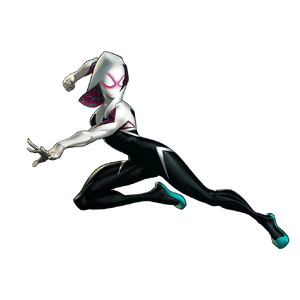 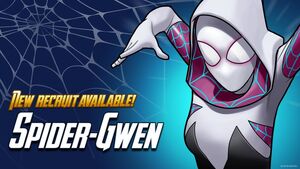 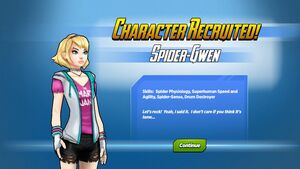 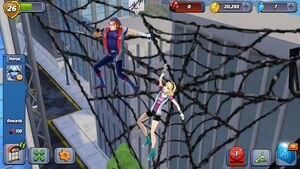 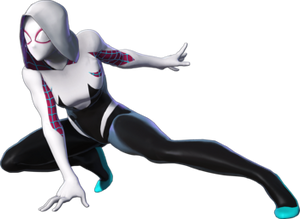 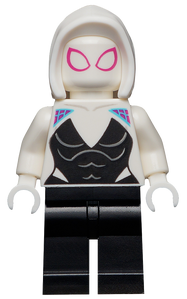