Heroes Wiki
Register
Don't have an account?
Sign In
Advertisement
in: Articles under construction, Anti-Hero, Vengeful,
and 29 more

NOTE: This article is about the incarnation of Ghost Rider from the Marvel Cinematic TV series. The mainstream version can be found here: Ghost Rider (Marvel).

Killing those who are guilty
Cring for the Hell Charger

Retrieve the Darkhold (succeeded)
Stop his uncle, Eli Morrow from becoming a God (succeeded)
Punish the guilty and defend the innocent

Roberto "Robbie" Reyes (also known as the Ghost Rider) is the anti-heroic deuteragonist of the fourth season of Agents of S.H.I.E.L.D.

He is often confused of being a villain by S.H.I.E.L.D. though in reality he is only trying to get rid of crime in L.A. and protect innocent people like his brother. Although he will kill criminals instead of bringing them in, which is something a hero would not do, he states he tries and lives a by a code to only kill those who are evil.

He was originally thought to be the first character in the MCU to take on the mantel of the Ghost Rider, but it's later revealed he is the second, the first being Johnny Blaze (who gave Robbie his powers in order to save his brother, and get revenge on those who killed him).

He is portrayed by Gabriel Luna, who also portrays Tommy Miller in The Last of Us.

Roberto "Robbie" Reyes is the son of unnamed parents, and is the older brother to Gabriel, and his parents died of at an unknown time. He was raised in Los Angeles by his uncle, Eli Morrow alongside his brother, and dropped out of Garfield High School during his junior year. Despite dropping out of school, Robbie took a job at Canelo's Auto and Body, becoming an expert mechanic.

One day, Robbie decided to steal his uncle's car and take it for an illegal drag race in Los Angeles. He was caught by Gabe, and invited his brother to join in the race, and they went cruising around the neighborhood. A group of Fifth Street Locos pulled up in front of their car, and they attacked the brothers, throwing a Molotov cocktail that caused the Hell Charger to be engulfed in flames.

Reyes used his driving skills to attempt to escape the gang, but the gang caught up with them and fired at the car, causing it to crash. Gabe's injuries caused him to lose the ability to walk, as Robbie was thrown from the car, flying into the air with his body covered in bullet wounds. His last thought was to call for help to anyone who would listen, God, or someone else to save Gabe, as he blamed himself for the incident.

Robbie died upon impact, but heard a voice through the darkness, asking him if he wanted to avenge both his own death and to get revenge on those who harmed Gabe. Reyes said yes, and a moment later he was alive again, and the stranger came to him. It was Johnny Blaze a demonic being with a flaming skull, and touched Robbie, who transformed into the Ghost Rider. Robbie decided to not tell Gabe of how he survived, as he feared that Gabe would not able to understand, and Eli was later sent to South Ridge Penitentiary on charges of attempted murder.

Robbie then used his demonic powers to track down and bring vengeance upon those he deemed guilty and deserved death. This included members of the terrorist group Watchdogs, the Fifth Street Locos, a corrupt cop, councilman Roger Perez, and the pedophilic school teacher Thomas Wright. His murder spree gained him a dreaded reputation, and made the Ghost Rider a feared symbol in Los Angeles, with his story being told and his image being sprayed painted on walls.

Reyes is absolutely brutal in his methods, even torturing and executing his victims after they've already been subdued. However, he only kills those who truly deserve it. The innocent are spared even if they attack him, as shown when Ghost Rider spares Quake even though she doesn't think of herself as a good guy.

On the flip side, he used to be reckless and uncaring, as he sold his soul to the Devil to save his brother's life from a gang attack. But he blames himself for the experience and remains torn between his desire to atone for his mistakes and the Rider's thirst for vengeance. 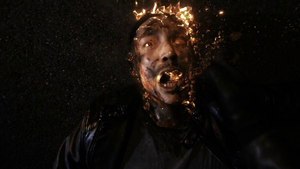 Robbie being bestowed the power of the Ghost Rider. 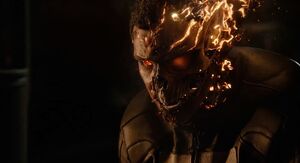 I'm not the one who decides... 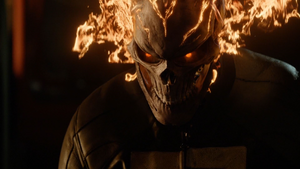 The Spirit of Vengeance takes over Reyes in front of Quake. 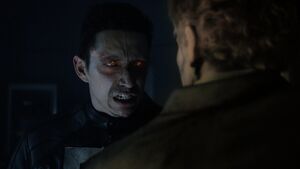 An angry Robbie before transforming. 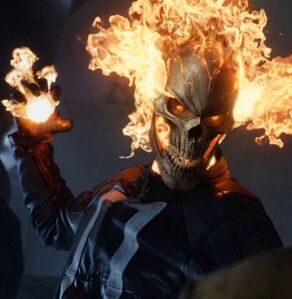 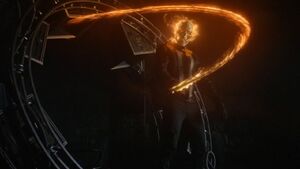 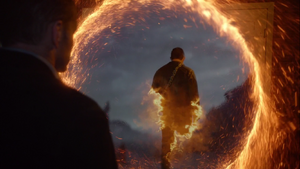 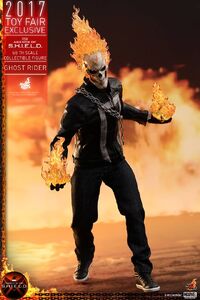