Ghost of Christmas Yet to Come

The Ghost of Christmas Yet-to-Come

Spirit of the Future

The Ghost of Christmas Yet-to-Come is a fictional character in English novelist Charles Dickens's A Christmas Carol. It is the third and final spirit to visit the miser Ebenezer Scrooge on Christmas Eve. The spirit closely resembles The Ghost of The Grim Reaper.

"The Phantom slowly, gravely, silently, approached. When it came near him, Scrooge bent down upon his knee; for in the very air through which this Spirit moved it seemed to scatter gloom and mystery. It was shrouded in a deep black garment, which concealed its head, its face, its form, and left nothing of it visible save one outstretched hand. [...] It thrilled Scrooge with a vague uncertain horror, to know that behind the mask there were eyes staring at him."

Scrooge finds the Ghost Of Christmas Future the most fearsome of the Spirits; it appears to Scrooge as a figure entirely muffled in a black hooded cloak, except for a single spectral hand with which it points. Although the character never speaks in the story, Scrooge understands it, usually through assumptions from his previous experiences and rhetorical questions. It is notable that, even in satires and parodies of the tale, this spirit retains its original look. It looks the way it does because it represents what the future holds for Scrooge if he does not change his ways.

When the Ghost makes its appearance, the first thing it shows Scrooge is three wealthy gentlemen making light of a recent death, remarking that it will be a cheap funeral, if anyone comes at all. One businessman said he would go....if lunch is provided. Next, Scrooge is shown the same dead person's belongings being stolen by Scrooge's charwoman Mrs. Dilber, Scrooge's laundress, and the local undertaker and sold to a receiver of stolen goods called Old Joe. He also sees a shrouded corpse, which he implores the Ghost not to unmask. Scrooge asks the ghost to show anyone who feels any emotion over the man's death. The ghost can only show him a poor couple indebted to the man momentarily rejoicing that the man is dead, giving them more time to pay off their debt. After Scrooge asks to see some tenderness connected with death, the ghost shows him Bob Cratchit and his family mourning the passing of Tiny Tim. The spirit then takes Scrooge to a rundown churchyard and shows the repentant miser his own grave; Scrooge then realizes that the dead man of whom the others spoke ill was himself.

Horrified, Scrooge begs the ghost for another chance to redeem his life and "sponge away the writing on this stone". For the first time the hand appeared to shake. "Good Spirit," he pursued, as down upon the ground he fell before it: "Your nature intercedes for me, and pities me. Assure me that I yet may change these shadows you have shown me, by an altered life!"The kind hand trembled. Scrooge then awakes to find that the spirit's hand has become his bedpost and that he is back in the present on Christmas morning. Along with the visions supplied by the other spirits, the ghost's warnings about Scrooge's future transform him into a better man. 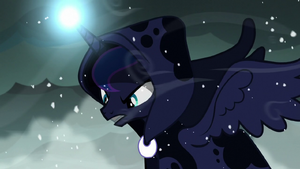 Princess Luna as the Spirit of Hearth's Warming Yet to Come (AKA: The Ghost of Christmas Yet-To-Come)> 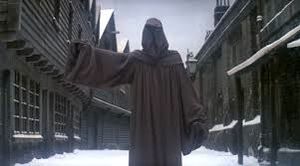 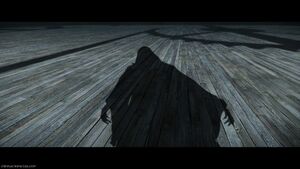 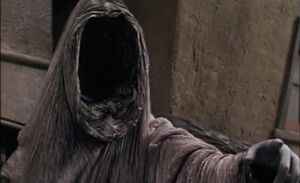 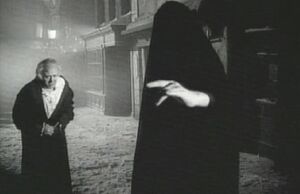 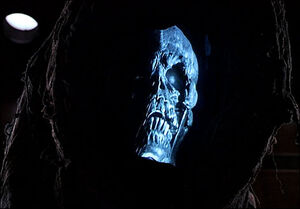 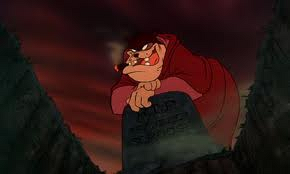