Heroes Wiki
Register
Don't have an account?
Sign In
Advertisement
in: Candidate for Deletion, Ben 10 Heroes, Cartoon Heroes,
and 25 more

He was voiced by Steve Blum in the Original Series and Ominverse, Jeff Bennett in Alien Force and Ultimate Alien. Blum also voiced Garazeb Orrelios in Star Wars Rebels, Heatblast in Ben 10, Green Lantern in Injustice 2 and Sub-Zero in Mortal Kombat X and Mortal Kombat 11.

Ghostfreak is a grey ghost-like alien with black lines all over his body, hands that resemble to claws and one purple eyes, and a ghost-like tail. He also has black tentacles with white stripes when removing his skin.

Without his protective skin, Ghostfreak can be harm by sunlight, Sunlight will also destroy Ghostfreak turning him to ash.

Ghostfreak is vulnerable to magic.

Ghostfreak cannot possess and control mindless beings as they had no mind for him to control, Such as a zombie.

In Permantent Retirement, Ben transform into Ghostfreak to sneakout of Vera's house and went to find something to do, He finds a golt cart and decides to drivie it while cloaking himself so no one see him. Ghostfreak smells something that tracks his attenation which came from a apple pie and decides to take it, but much to his disgust, He witness a old lady leaping on the ceiling and eats a fly and leaving him suspected of the elderly people weird behavior and decides to investigate entire retirement community to seek some answers.

In The Big Tick, Ben transform into Ghostfreak to use his tentacles with sharp spikes to damage the Great One's shell, but with no effect.

In Ghost Town, Ben scanned Zs'Skayr again and transformed into Ghostfreak, but Zs'Skayr quickly regained control. With the "help" of Vilgax, however, Ghostfreak was able to revert to Ben. 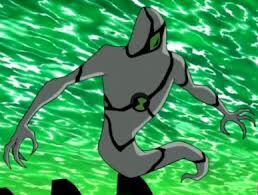 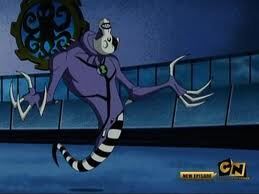 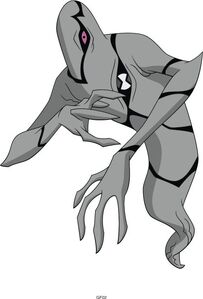 Ghostfreak in the original series 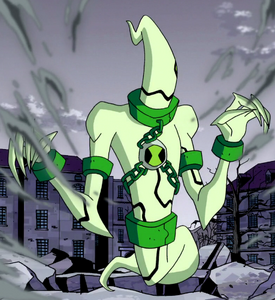