To help Alex and his friends and to regain fame and glory (Third film; succeeded)

Gia is a major character in Madagascar 3: Europe's Most Wanted.

She is voiced by Jessica Chastain, who also played Beverly Marsh.

She is a jaguar who is the love interest and later girlfriend of Alex and wears only a blue necklace. Despite being of a kind of animal that comes from Latin America, she speaks some Italian.

Gia is generally kind and also passionate about Trapeze. Gia speaks with an Italian accent. She defends her circus friends of any threat or insult, an example is when Alex unintentionally made fun of Vitaly, the father-like figure of Gia, which made her instantly mad. Gia is very beautiful and graceful. She eventually seems to develop a romantic attraction to Alex after they bond practicing Trapeze. Gia is a trapeze performer in Circus Zaragoza and a very passionate actor on the trapeze, who respects her fellow performers as family and friends. She seems to look at Stefano as a good friend, possibly like a little brother figure, while Vitaly is like a father figure.

Gia is first seen with Vitaly the tiger and Stefano the sea lion, all heading to the circus while Alex, Marty, Gloria, and Melman were trying to escape animal control. Gia lets the Four on the circus train after Alex convinces her that they are circus animals.

She is fooled into believing that Alex is a master circus performer and is falsely following the ways of "Trapeze Americano." When the circus falls into a rut, she doesn't show too much desperation, much like her father figure Vitaly. But when she hears Alex's improvised speech, she is spurred into the "Fur Power" works. Her act with Alex and the trapeze plants herself even closer to the lion. But their cover is blown by DuBois's arrival, although the penguins manage to get rid of her. When Alex and the gang finally admit their true intentions after their London performance, Gia and the rest of the performers are devastated.

When the gang and the circus animals split up in New York, the circus soon falls into sadness, mostly to Gia and Stefano, because they had no one to work with in their acts. Vitaly tries to convince his comrades to work on a solo act, but nobody would. Then all of a sudden, a sedated King Julien pops into the scene and pleads to his bear girlfriend Sonya to take him back and forgive him. While he was begging, Kowalski, one of the penguins, pulls the sleeping dart out of the lemur's tail. It's revealed that DuBois had captured and caged the zoo animals.

Gia was the first to realize their friends were in danger and convinces the rest of the circus animals to help save their zoo pals. In the end, after bringing the blimp to the zoo, Gia swings her way to Alex just in time before he is killed by the poisonous dart that DuBois shot to the lion, and she rescues him. DuBois then pursues to kill Stefano to avenge Alex. Yet before she could kill the sea lion, Gia and Alex come to the rescue, "Trapeze Americano" style, and save Stefano. By the time Alex grabbed Stefano, he also got DuBois. Alex acts quickly and gives Stefano to Gia before DuBois got them both. As Alex and DuBois clash in the air, they were going to land in the penguins' habitat filled with cobras, but Alex whistles for the dogs with rocket skates who rescue them in time, and Alex throws DuBois in his old habitat where Mort sedates her and leaves her there. Gia is taken by Alex with the rocket dogs hanging on his back. Alex then releases a huge mass of balloons up in the air to the children below, then he and Gia smile at each other lovingly before joining the others on the flying circus platform.

Gia is last seen dancing to a mixture Marty's own "Afro-Circus" music video and Julien's "I Like to Move it, Move it" with everyone, including Vitaly, wearing rainbow-striped afros and the circus horses painted with colorful polka dots going across America continuing with the tour. 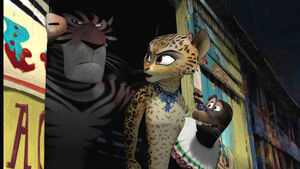 "They're circus. Circus stick together." 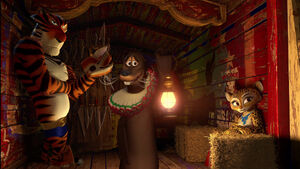 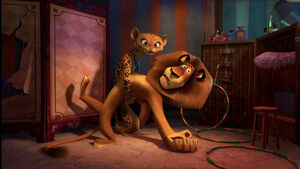 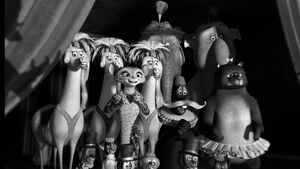 In a flashback, Gia cheers for Vitaly as he does his hoop act. 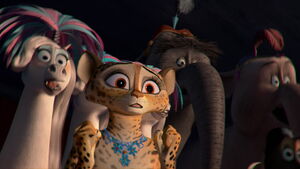 When Vitaly tries to jump through a burning hoop, Gia watches in concern and horror. 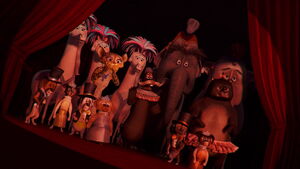 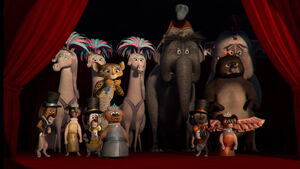 Gia watching Vitaly get treated for his wounds. 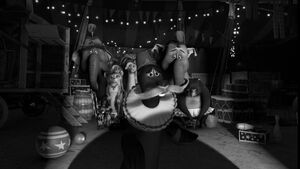 After Vitaly recovers from his wounds, Gia watches as Stefano tries to talk to him. 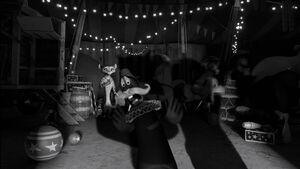 Gia scared when Vitaly aggressively roars at the circus animals. 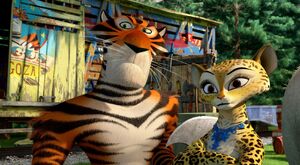 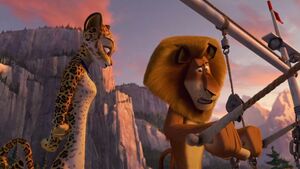 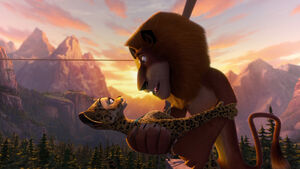 Alex and Gia falling in love 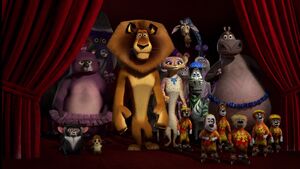 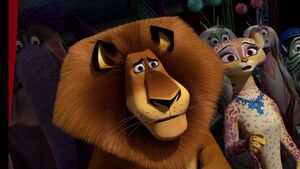 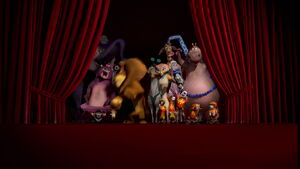 After Vitaly makes it through the hoop, Gia and the rest of the animals get ready to do their acts. 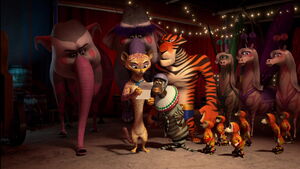 After the penguins get rid of Chantel DuBois, Gia finds and looks at a flyer of Alex. 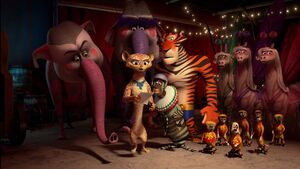 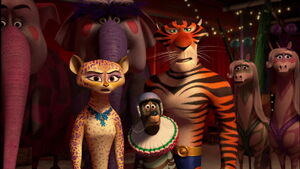 Gia shocked to discover that Alex and his friends lied to her and the rest of the circus. 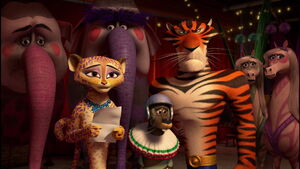 "After all we been through together, you want to go live in a zoo?" 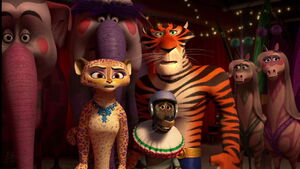 Gia hurt by Alex and his friends' deception. 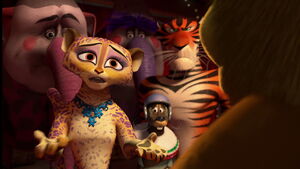 "And Trapeze Americano. You made that up too?" 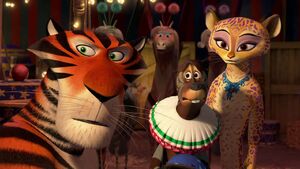 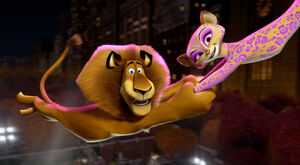 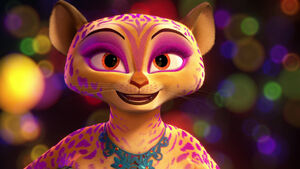