Raz Malhotra is a computer technician whose former field study was in artificial intelligence at the time when Hank Pym started to rid the world of them.

Raz Malhotra was a young man whom worked as a rent-for-hire computer programmer. He was hired by a man whom turned out to be the criminal mastermind known as Eggman. Eggman hoped to use Raz in defeating one of his rivals, Scott Lang, the Ant-Man. When Raz found out that the man whom hired him was a supervillain, Raz helped Scott Lang in stopping the criminal Egghead.

After assisting Ant-Man (Scott Lang) on a mission, Lang gave him the Giant-Man suit. Unfortunately, in chasing a criminal in San Francisco, Raz caused several hundred million in damages to the Golden Gate Bridge. Wasp tasked him with bringing his ally under control.

Raz help The Ultimates complete the Abeona, ship design to travel outside the Omniverse. Blue Marvel later ask for his assistance to construct a Pym Particle Accelerator in order to anchor and reduce Infinaut to human size so he wouldnt destroy the Earth whiles coming into reality. 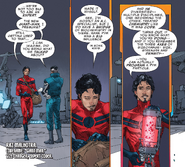