Taking off his shirt (formerly).

To help his friends and his family when they need help.

Orenthal "Gibby" Cornelius Gibson is a funny friend of the iCarly gang. He used to take his shirt off all the time but he's getting too old for that as he claims he does it "less regularly now". Gibby's catchphrase is "GIBBAY" Gibby is always tortured or "assisting" on iCarly, but hardly notices it. Gibby is a good fighter. Gibby is a outcast due to his odd and pudgy personality, but has a few friends. Much like Freddie, Gibby is a victim of Sam's pranks and bullying and Gibby's voice has gotten deeper like Freddie since season 4. Gibby is skilled in massage therapy. Gibby enjoys going to camp. His parents are divorced. Gibby has emotional problems since he is a main target for bullies and mostly, Sam. Gibby will continue to have adventures in his spin-off, "Gibby" after the series finale of iCarly.

Gibby was known for his many eccentricities, such as taking his shirt off to get comfortable (a trait whcih vanished as iCarly progressed and he got older), pronouncing his name "Gib-ayyh" whenever he entered the room, extremly low intelligence and carrying his own mannequin head all these traits is what led him to be a target of bullying such as his abusive teacher, Mister Howard or friend, Sam Puckett. He was also somewhat gullible and naive such as thinking a man at a pawn shop was trying to unload a space rock on him when in reality he was trying to steal his friends bail and whenever he was under massive stress he would vomit. Despite this Gibby has an aggressive side. When he thought that Freddie betrayed him by kissing his girlfriend, Shauna he demeded revenge and wanted to fight Freddie on iCarly. In contrast to his wierdness Gibby was a "smooth operator" able to go on dates with girls who are considerably more attractive than his friends considered would be seen with him, it was also why people considered many of Gibby's girlfriends to be mentally deranged. A running gag was whenever he entered Carly's apartment applause would occur. Gibby's full name was never revealed until the episode "iStillPsycho." Gibby was also revealed to be an amazing singer while helping Sam and Freddie blossom their romance.

Though he's not normally intelligent, he was able to determine the hidden message in the video that Sam, Freddie, and Carly sent him, informing him that they were being held hostage by Nora. 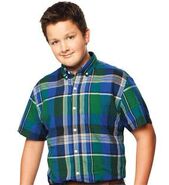