She was voiced by Jenny Slate, who also voice Pony Head from Star vs. the Forces of Evil, Huntress Wizard from Adventure Time and Dawn Bellwether from Zootopia

Gidget is a short Pomeranian dog about half the height of Max. She has smooth white fur, tiny appendages (with which she can run deceptively faster than she may appear; as well as fight with on a very advanced Martial Arts level), beautiful blue eyes, and a pink bow on her head.

Gidget is a very bouncy and bubbly young dog (presumably younger than Max). She is shown to be very loving, sweet, and very determined to find Max when he goes missing; recruiting help to track him down. However, despite this, Gidget does appear to have some anger issues. Such as being driven to rage when Ozone would not reveal to her about Max's whereabouts, she harshly scolds Tiberius for trying to kill and eat her, she kicks Chloe off her back after the latter attempted to silence her rambling at Snowball (possibly showing she can be aggressive even to her allies), as well as wiping out an entire army of Flushed Pets when they were about to kill Max. She however only did that to save Max (who she refers to as her "true love").

Gidget lives in an apartment in New York in which she rarely leaves. Gidget has a crush on her dog neighbor Max, who she avidly watches from her apartment window. When Max is missing one day however, she wants to find him with help of all of her friends. Gidget meets Tiberius when trying to find Max. She promised him that if he helped her, she would become his best friend. Tiberius agreed to this. She interrogates (and attacks) Ozone for more info.

In her apartment, Gidget gathers all the pets of the block to form a rescue team and return Max to the apartment before all the owners return at dinnertime. Before looking for Max, Gidget and the rest of the apartment animals search for Pops, an old dog who knows the city very well and has ways to get fast.

After making it to the sewers, Gidget hears Snowball talk about Max and tries to defend him but the Flushed pets chase the apartment pets in order to sue Max, but only capture a ginea pig Norman.

While Max and Snowball try to save their friends by joining forces, the rest of the Flush pets try attacking Max misunderstanding him by having Snowball in his mouth but at that same moment Gidget and the rest of the apartment pets fight the Flushed Pets in order to defend Max (Mostly Gidget fights everyone). While Gidget is fighting the Flushed Pets, Max gets amazed by her moves and has a slow motion moment of her moves, making Max fall in love of Gidget.

After Snowball and Max successfully save Duke and arrive to the street of all the apartment pets, Max admits to Gidget his love for her after seeing her in the bridge and apologizing for not noticing her before (cause he barely noticed her now in the bridge fight and fell in love of her), after that both share some lick for their new relationship and love for each other. She is later greeted by her owners when they come home. She then later enjoys a meal prepared by her owners.

Gidget and the other pets will be returning in The Secret Life of Pets 2, due to be released on June 7, 2019.

Gidget on the couch 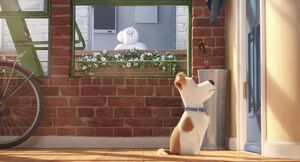 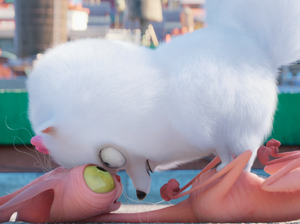 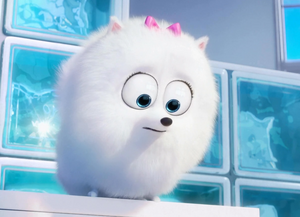 Gidget speaking to her rescue team. 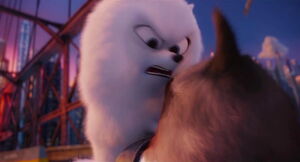 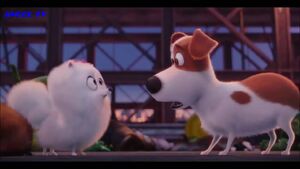 Max and Gidget on the Brookin Bridge; Max in awe at Gidge's defeat of the Flushed Pets army 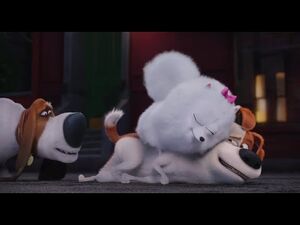 Gidget laying on Max after kissing him, sparking their new relationship 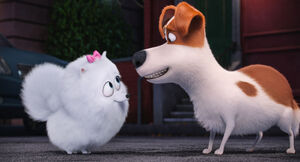 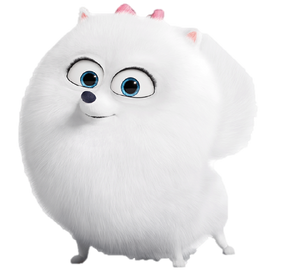 Retrieved from "https://hero.fandom.com/wiki/Gidget?oldid=1875235"
Community content is available under CC-BY-SA unless otherwise noted.