Giggle McDimples is a supporting character who made her debut in Pixar's 21st feature film, Toy Story 4. She is a miniature police officer toy who accompanies Bo Peep as her assistant.

Giggle McDimples has a plucky, excited demeanor and dedicates to her role as a "cop".

A tiny figurine, Giggle McDimples wears a typical blue cop uniform, a lighter blue shirt and darker blue skirt, with a dark blue policewoman's hat, black shoes, black tie, and black leather belt. Her head and hair is roughly the same height as the entire rest of her body, and considerably wider, and her skin is caramel as seen in her face and arms due to her sleeves being cut off. 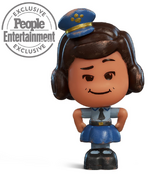 Retrieved from "https://hero.fandom.com/wiki/Giggle_McDimples?oldid=1706686"
Community content is available under CC-BY-SA unless otherwise noted.