Gil Bartis is a hero from the 2013 American comedy television series We Are Men. He protects his friends and family - specifically Carter (a friend), Stuart (a friend), and Maisie (his daughter).

Gil was portrayed by Kal Penn.

Gil is a small business owner living in Olympia Apartments in Tarzana, California (United States). He has been separated from his wife for a year and a half and hopes to be with his wife again someday. His friends include Carter Thomas, Dr. Stuart Weber, and Frank Russo. His wife's name is Claire and his daughter's name is Maisie.

Gil is an adult American male in his mid thirties and is of Indian descent. His personality is calm and subdued. He wears regular everyday men's clothing including white t-shirts, and boxer shorts underwear decorated with multicolored vertical stripes.

Gil saves Carter by providing important life-changing guidance. During the day when Carter unloads brutally honest assessments of his friends, he walks off to be alone and play some basketball. Gil realizes Carter is still in a lot of pain from being abandoned at the alter. Gil visits Carter on the basketball court to give some words of enlightenment. Gil says to Carter that waiting for someone to come back is not the right approach to take with Sara. Carter sees that if he loves Sara then he must go and fight for her. Carter becomes energized and decides not to be defined as the guy abandoned during his wedding day. He immediately drives to Sara's home to fight for her. When Carter walks in to fight he finds out the couple broke up two weeks ago. Sara confesses that she made a giant mistake. Sara is very apologetic and realizes that Carter must hate her. Carter shows he still loves her by giving her a kiss. After Carter and Sara reconcile, they both go back to Olympia Apartments to thank Gil and to help Carter move out.

Gil helps Stuart by taking part in the plan to rescue Stuart's pet dog Peaches from Stuart's angry ex-wife Amy. During Stuart's conversation with his lawyer, Stuart learns that Amy is willing to settle the divorce proceedings only if Stuart lets her have Peaches. At first Stuart does not want to give up Peaches. Stuart saved Peaches six years ago. Peaches has been the longest relationship Stuart has had with any female. However, he is already tired of the long divorce proceedings and decides to concede. While hiking with his friends, Stuart finds out Amy does not care at all for Peaches. The only reason Amy wants Peaches is because Amy is vindictive, angry, and wants to inflict emotional pain onto Stuart. Stuart's friends decide to help him with his problem. Frank comes up with the idea of rescuing Peaches from Amy. All the guys secretly sneak into Amy's home while she is away and wait for the dog walker to drop off Peaches. Unfortunately, one of Stuart's patients is going into labor and he has to leave to take care of the birth. When the dog walker drops off Peaches the guys have trouble calming her down. By the end of the day, the guys get Peaches back and deliver her to Stuart. When Amy finds out Peaches is missing she immediately goes to Stuart's apartment to get her back. The confrontation between Stuart and Amy lead to the couple of have sex and reconcile their differences.

Gil helps Maisie by rescuing her from the cold heartless Brittany Sandford. Originally, Maisie and Gil planned on going on a camping trip to help continue the father-daughter relationship during Gil's separation with his wife. However, Gil was crushed when he found out Maisie cancelled the trip because she was invited to a slumber party hosted by Brittany Sandford (the most popular girl in the third grade with an "insane" basement). Later on in the same episode, Gil gets a cellphone call from Maisie. Maisie is crying, miserable, and wants to be rescued from Brittany Sandford's party. Gil does his best to rescue his daughter which includes risking injury from a dog bite. At the end of the day, Gil saves Maisie and the two enjoy a night under the stars in a camping tent. 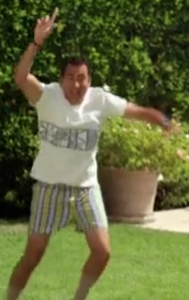 Gil going to rescue Maisie in his boxer shorts. 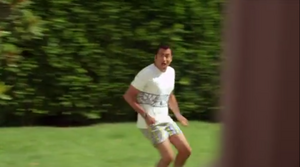 Gil looking back at Carter and Frank.
Add a photo to this gallery
Retrieved from "https://hero.fandom.com/wiki/Gil_Bartis_(We_Are_Men)?oldid=1698483"
Community content is available under CC-BY-SA unless otherwise noted.