Gilda is a character in My Little Pony: Friendship Is Magic. She first appears in the fifth episode of season 1, Griffon the Brush-Off, where she is the main antagonist of the episode. Later Gilda made brief cameos in season 3 and season 4 Magical Mystery Cure and Equestria Games. She really returns in the fifth season in the episode The Lost Treasure of Griffonstone as the main anti-hero. She is a griffon (or griffin/gryphon) who is a grumpy, selfish bully who thinks that she's cooler than everyone else (however, later she starts to tone down) and serving the main antagonist-turned-anti-heroine. Gilda was an old friend of Rainbow Dash, but after a quarrel their friendship collapsed for a long time until they finally reunited again after 4 seasons. Gilda is voiced by Maryke Hendrikse, who also voiced Revy and Bubbles.

As a griffon, Gilda has the head, wings and feet of an eagle and the body and tail of a lion. Her head feathers form a fringe that hangs ahead of her face.

Gilda thinks that she's cooler than everyone else and is not afraid to show it. She regards others as 'lame' compared to her and can be quite vocal about it when not in the company of her friend Rainbow Dash. She seems playful and competitive around Dash but actually she's very rude, violent, bad-tempered, mean-spirited and arrogant with an inflated ego. She doesn't seem to care about others feelings. When she's calm her voice sounds apathetic and bored...vaguely annoyed with lack of emotion. She's also a liar, hiding her true colors by forcing herself to acting friendly towards Rainbow Dash. She seems to dislike ponies and considers them "lame" and annoying.

Gilda also seems to like mean pranks. Unlike Rainbow Dash and Pinkie Pie she does pranks on others only for her own joy, without caring about the victims. But she can't take the pranks when she is the victim. She doesn't mind stealing things without pay or destroying others objects (like Pinkie's contraption).

Gilda is a long-time friend of Rainbow Dash, one of the major protagonists of Friendship Is Magic. They were best friends from their days at Junior Speedster flight camp. The two of them attended flight school together and were close friends. In the episode Griffon The Brush-Off, Gilda visits Ponyville to hang out with Rainbow Dash. Pinkie Pie tries to join them but Gilda wants nothing to do with her and keeps brushing her off in rude and menacing ways, going as far as theratening her and telling her to get lost (out of Rainbow Dash's earshot). Afterwards, Gilda is strolling through Ponyville and Pinkie Pie is watching her from a distance since she's concerned that she might just be overly judgmental of the griffon. Pinkie sees Gilda play a prank on Granny Smith, stealing an apple from a fruit cart and bullying Fluttershy until she roars loudly on her face, scaring also a family of ducks that Fluttershy was trying to guide and reducing her to tears since the pegasus is very sensitive and shy. Pinkie Pie realises she didn't misjudge Gilda at all and that the griffon really is a "mean meany-pants". Pinkie Pie then decides to try and do something about Gilda's bad attitude with the hope of improve it and make her smile by throwing her a welcoming party and inviting everyone in Ponyville. Gilda is not very happy about it and acts very annoyed and arrogant. During the party, Gilda fell for a number of pranks such as a joy-buzzer, relighting birthday candles, and various others. This definitely don't help to improve her attitude, as she try to suppress her rage. During this time, Gilda suspects Pinkie Pie to be one setting up the party pranks that were set up for the griffon. After falling for so many of these practical jokes, Gilda went into a rage and lashed out at everyone, insulting every pony at the party and accused Pinkie Pie of being responsible for all the pranks. She is still think she don't lose her cool (probably implying when she's angry she's worse than this) As it turned out, most of the pranks were Rainbow Dash's idea and that they weren't all intended for Gilda, but the griffon managed to fall for all of them out of sheer dumb luck. Gilda had exposed her true colours to Rainbow Dash, who felt that the griffon only cares about herself and being a fake friend, decided to end their friendship right then and there. Gilda could have done something to not lose her old friend but she decide that Rainbow Dash had become 'lame' after hanging around all these ponies and left Ponyville in a huff.

Gilda briefly appears in one of Rainbow Dash's flashbacks during Magical Mystery Cure, in season 3.

Gilda also briefly appears in Equestria Games in the audience as Spike attempts to light the torch. 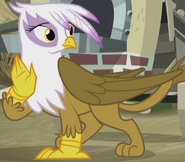 Retrieved from "https://hero.fandom.com/wiki/Gilda?oldid=812797"
Community content is available under CC-BY-SA unless otherwise noted.