Adding treasures to his vast collection.

Gilgamesh, also known as the King of Heroes and Caster, is a playable character in the 2015 turn-based tactical role-playing science fantasy mobile game Fate/Grand Order.

As opposed to his main timeline version, the Gilgamesh of the Babylonia Singularity presented himself in a much more heroic light. Known as the King of Heroes, Gilgamesh was the tyrannical ruler of the great city of Uruk during the Mesopotamian age. However, despite his tyranny, Gilgamesh cared deeply for the welfare of his kingdom, and would willingly put his own life on the line to protect it from harm.

Gilgamesh, like his main timeline counterpart, is voiced by Tomokazu Seki in Japanese and by David Vincent in English. Seki has also voiced Sanemi Shinazugawa in Demon Slayer: Kimetsu no Yaiba, Tracey Sketchit in Pokémon, and Itaru Hashida in Steins;Gate. Vincent has also voiced Robin in Fire Emblem, Marshall Law in Tekken, Grimmjow Jaegerjaquez in Bleach, Richter Belmont in Castlevania, and Arthur Auguste Angel in Blue Exorcist. 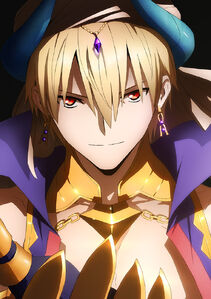 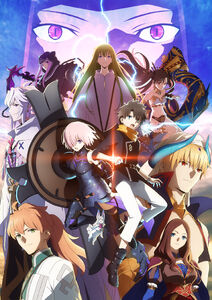 Gilgamesh on the second key visual for the Babylonia anime adaptation. 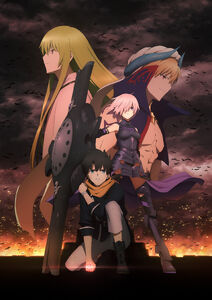 Gilgamesh on the third key visual for the Babylonia anime adaptation.