Leader of the Tank Gang

Help Nemo escape from the tank and Darla's clutches (succeeded).

Escape the fish tank and go home to the ocean (succeeded).

Gill is a major character in Finding Nemo, and makes a minor return in the sequel, Finding Dory. He is the leader of the Tank Gang and a close friend with Nemo, whom he met at the dentist's fishtank in Sydney, Australia. He is the mastermind behind the plan of getting Nemo and the others in the tank to escape by stopping the rotating machine with a pebble. When the plan unfortunately failed, almost resulting in Nemo getting killed, they thought of a better one the next day when there was a special fish tank system put in place. Nemo faked dying, and after a matter of crazy things happening, Gill catapulted him into a drain and was never seen by Darla again. Some time after Nemo is finally reunited with his father, Gill and the others from the tank are shown to have escaped and are swimming happily in the ocean... albeit still stuck in plastic bags.

Gill's only dream is to escape from the tank. He had made several escape attempts, but the first time, he landed on dental tools, giving him severe scars on his right side, and destroying his right fin. His appearance is modeled after the voice actor who does his voice, especially the coloring around his mouth to show the deep wrinkles that Dafoe has on his face.

He is the leader of the fish living inside the dentist's office fish tank called the Tank Gang. Unlike the other Tank Gang members, Gill had a neutral reaction to Nemo's entrance. He also told Nemo to swim out of the tube he was stuck in without anyone's help. Learning that because Nemo is a young boy who can fit through small tubes, Gill immediately ordered him to use a pebble to stop the aquarium filter. With the filter sabotaged, he knew the dentist would put the fish in bags, which would give them the opportunity to return to the ocean.

Eventually, Gill helps Nemo escape the office by jumping onto the dentist's mirror to catapult the clownfish into the air so that he lands into a sink leading to a drain, which leads to the ocean. After Dr. Sherman puts Gill back into the tank, the Tank Gang congratulates him on finally succeeding in helping Nemo return to the ocean, and they all happily watch Darla break the sink and get harshly sprayed in the face.

At the end of the film, Gill and the other Tank Gang members manage to escape from Dr. Sherman's office. Since Dr. Sherman's new AquaScum 2003 has broken down allowing the tank to get filthy again, he has to take his fish out, put them in bags and clean the tank himself, and while he complains to Barbara about the device breaking when it has a lifetime guarantee and is maintenance free, Gill and the others make their way out of the office. They are seen having crossed the street and jumped into the ocean to their freedom, although still trapped in the plastic bags (they presumably managed to get out by the ending credits).

In Finding Dory, Gill, along with the rest of the Tank Gang, appears in the post-credits scene. They are still trapped in their respective bags, now covered with algae, and then captured by the Marine Life Institute volunteers. 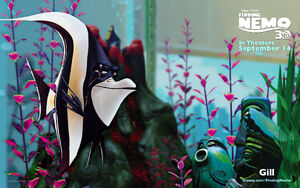 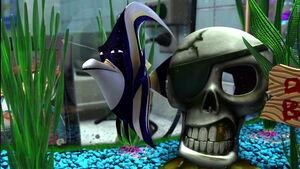 Gill emerges. Nobody touch him 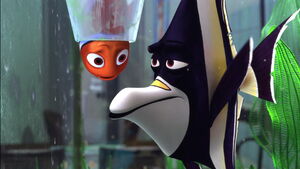 Calm down Alternate Wiggling your find and your tail. 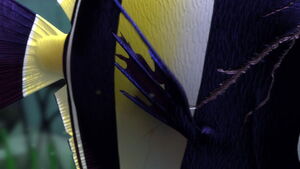 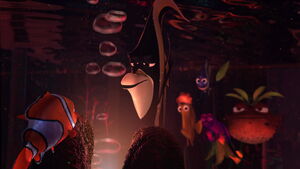 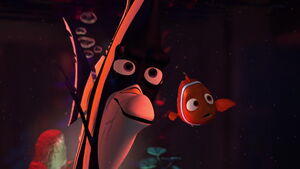 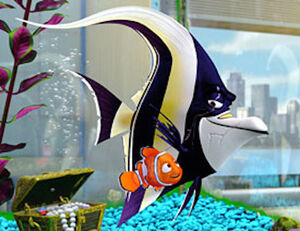 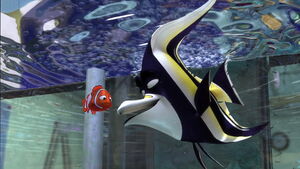 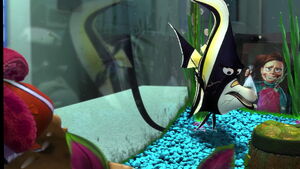 Gill realizes he sadly risked Nemo's life for his own means. 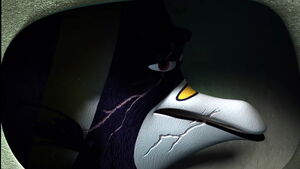 "I was so ready to get out, so ready to taste that ocean, I was willing to put you through harms way to get there. Nothing should be worth that. I'm sorry I couldn't get you back to your father, kid." 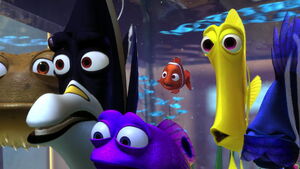 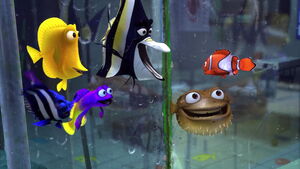 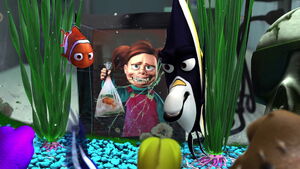 "Alright, men, we have less than 48 hours before Darla gets here. Think dirty thoughts we're gonna make this tank so filthy, the Dentist'll have to clean it!" 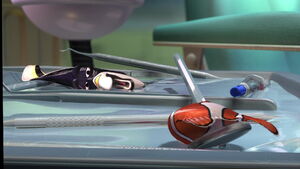 "He'll be okay. Don't worry, all drains lead to the ocean." 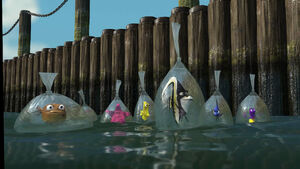