Ensure that Frodo destroys the One Ring (succeeded).

Help Aragorn and Legolas save Rohan and Gondor (succeeded).

Gimli is one of the main protagonists in J.R.R Tolkien's fantasy epic novel, The Lord of the Rings, and in Peter Jackson's film trilogy of the same name respectively.

He is a stubborn, belligerent, good-hearted, independent, mischievous, loud, ill-tempered, generous, intelligent, meticulous, loving and idealistic dwarf who joins the Fellowship of the Ring to destroy the One Ring, and kill many orcs along the way. He is close friends with Aragorn and Legolas but still clashes with the elf due to the thousand year old feud between elves and dwarves. He participates in many battles including Moria, Helm's Deep, Pelennor Fields and the Black Gate. His weapons include twin hatchets and a giant battle axe. He is very stubborn and often explains the stubbornness of dwarves. He loves fighting and even when outnumbered, he never backs down and always competes with Legolas to kill more orcs than him.

He is portrayed by John Rhys-Davies, who also played Sallah in Indiana Jones, Sangimel in Fire and Ice: The Dragon Chronicles and Cassim in Aladdin and the King of Thieves.

The Lord of the Rings trilogy

Gimli was among the may summoned to the council of Elrond at Rivendell to discuss the fate of the Ring. When Elrond told the council that the ring must be destroyed, Gimli decided to save everyone the trouble by chopping it with his axe. The axe broke into pieces and the ring was unscathed. Elrond continued saying that the ring can only be destroyed in the fires of Mount Doom and therefore, someone must bring it there. Boromir of Gondor explained the horrors of Mordor and how this mission is impossible but Legolas of Mirkwood grew tired of Boromir's negativity and demanded that the Ring must be destroyed. Gimli caused an outburst saying that elves are untrustworthy and that he'd rather be dead than to see an elf entrusted with the task. Soon the whole council break into argument and Frodo decides that he will take it. When Legolas volunteers to join the fellowship, Gimli joins as well to prove that dwarves are still worthy.

After days of traveling and tired of going the long way, Gimli suggests to Gandalf that they go through the mines of Moria to get past the misty mountains. He said that the dwarf populated mines would be a safe haven and that his cousin, Balin would give them a warm welcome. Gandalf refuses as he fears death awaits them there. After being spotted by Saruman's flying spies, the Fellowship take the pass of Caradhras but Saruman tries to wipe them out by causing an avalanche. Gimli suggests again that they go to Moria and when they arrive, they find numerous dwarf skeletons and Gimli becomes distraught. As they journey onwards, they find a tomb and Gimli rushes towards it and finds it to be Balin's to which he is heartbroken. Pippin accidentally drops a skeleton down a deep well which caused an echo heard throughout the whole mine and brought the orcs to their location. They barricaded the door and Gimli stood on top of the coffin, ready to fight. He chopped many down with his axe but when the cave troll barged in, Gimli was almost crushed by it. When Frodo was stabbed, the fellowship banded together and kept attacking the troll until Legolas killed it. When Frodo revealed to be unharmed due to wearing mithril, commonly known to dwarves, Gimli was impressed. As they sprinted towards the bridge, a giant boulder broke the path to which the fellowship has to jump over to get to the other side. When it was Gimli's turn, he was too boastful to be thrown and when he jumped, he almost did not make it and had to have his beard to get over. They all managed to escape Moria but Gandalf sacrificed himself in order to do so.

When they reached the woods of Lothlorien, Gimli told the hobbits the legend of the elf witch, who was likely to be Lady Galadriel, who casts spells on intruders. Gimli was prepared for anything but was soon held at arrowpoint by Haldir and his elvish scouts. When the fellowship departed for the river, they were given cloaks and various gifts for their journey. Gimli asked Galadriel for a lock of her hair. She agreed and generously gave three locks. Later on, when they were ambushed by Saruman's Uruk-Hai, Gimli joined the battle and cut down many and when Boromir was slain, Gimli wept over the loss of his friend. With the fellowship broken, Gimli felt that they have failed and that it had all been in vain. Aragorn assured that it had not been and though they are broken, they must save Merry and Pippin. Aragorn suggested they go after them and hunt some orc to which Legolas and Gimli gladly join their friend and the three set off on their new mission.

The Lord of the Rings: The Two Towers

With Merry and Pippin captured and being sent to Isengard, Aragorn, Legolas and Gimli spend three days chasing after the Uruks on foot through the plains of Rohan. Aragorn and Legolas tirelessly sprint on with Gimli in tow a few feet back and ready to collapse from running too much but still won't quit. They are intercepted by Eomer and several Rohirrim who tell them that they slaughtered the uruks and perhaps, Merry and Pippin. The trio ride to the site where the uruks were killed and see hobbit footsteps heading towards Fangorn forest and head in.

Gimli finds orc blood and becomes frightened when he hears the ents lowly bellowing and lifts his axe. Legolas senses a wizard nearby and believes it is Saruman and prepares to strike. Gimli hurls two small hatchets at the wizard but the wizard easily deflects them. The wizard then reveals himself to be... Gandalf; a new form, a new power and revived. Gandalf brings the three to Rohan to rescue Theoden from the mind control of Saruman. They are not given a warm welcome and are asked to surrender their weapons save for Gandalf's staff. When Wormtongue unleashes guards on Gandalf, Gimli and the others hold them off and Gimli throws down Wormtongue to keep him for interfering. When Gandalf rescues Theoden and the king decides to bring all soldiers and refugees to Helm's Deep and Aragorn, Legolas and Gimli pledge their service. During the journey, Gimli befriends Eowyn and tells her stories about the dwarves and their ways of life.

The Lord of the Rings: Return of the King

Gimli then accompanied Aragorn and Legolas through the Dimholt in an attempt to recruit the Army of the Dead to aid them against the armies of Mordor attacking Minas Tirith. Upon freeing Gondor’s soldiers and capturing the Corsair's ships, the forces under Aragorn, including Gimli, sailed to Minas Tirith.

After being victorious at the Battle of the Pelennor Fields, Gimli accompanied Aragorn and the remainder of the Gondor and Rohan armies to the Black Gates intending on drawing Sauron's eye, emptying Mordor of it's orcs and giving Frodo time enough to destroy the One Ring. The One Ring is destroyed, Sauron is vanquished and Gimli reunites with Frodo alongside the rest of the Fellowship.

As a Dwarf, Gimli enjoys the great brawn and stamina typical of his race. He was said to be able to carry the weight of his armor like it was nothing, and together with Aragorn and Legolas, he ran 45 leagues in less than four days with only a few hours of sleep. He is undoubtedly a powerful warrior and capable axe wielder, who survived innumerable confrontations with Sauron's forces. He is armed with a battle axe, a two sided axe as well as throwing axes. 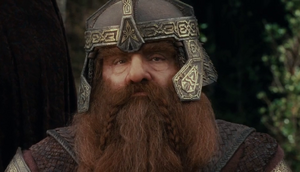 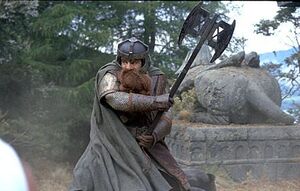 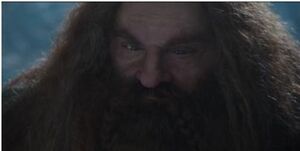 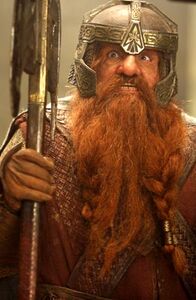 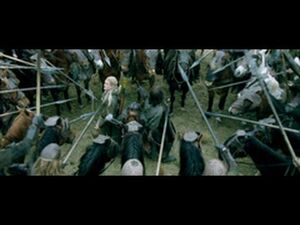 The Lord of the Rings - The Riders of Rohan (HD) 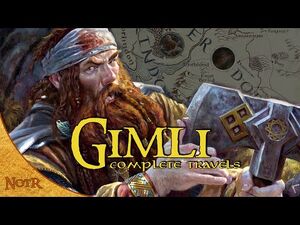 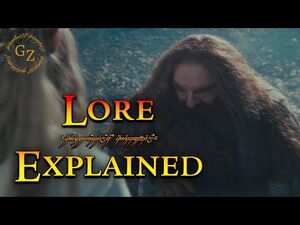