Start a Wiki
Ginzu the Ninja (also known as Sho in Japanese version, Ninja Commando in the character select screen or shortly Ginzu) is one of the 4 main playable heroes appeared to be available in the futuristic beat 'em up video game titled Captain Commando. As a part of Commando Team, he is a well-trained ninja and spiritual successor of the old Bushinryu Ninpo, a fictional art of Ninjutsu that was originally inherited by Guy from the first Final Fight game. After the game came out, he also has various roles along with Captain Commando in the crossover games: Marvel vs. Capcom series as an assisting character while performing hyper combos, Street Fighter Alpha 2 as seen in the background of Ken's stage, Capcom WOrld 2 as a cameo appearance, SNK vs. Capcom: Card Fighters series as a card, Namco X Capcom as an ally and Ultimate Marvel vs. Capcom 3 as he's with Commando Team in Heroes & Heralds card.

His razor-sharped ninja sword has a capability of cutting down his enemy into 2 pieces. His deadly or special skill is his smoke bomb which is used for making a smoke screen around his whole body. After that, the smoke explodes and attacking his adjacent enemies. His dash attacks are "Iazuki" used for piercing several foes only once and the airborne-only "Flying Katana" used for cutting down the enemies from above. He is also able to grab his foes and either kick their abdominal part or throw their shoulder or overhead. Unlike the other playable characters in the game, Ginzu is the only one who can throw ninja blades at his enemies when equipped during the game-play.

Ginzu has equipped with his "Ninja Eyes" for helping him to search various enemies 500 meters ahead in a shade, his "Servant Sword" serves nobody but only him, his alias "Lightning Light" and slices anything at atomic levels and his gear that is tougher than iron and softer than silk called "Ninja Suit".

Artwork of Ginzu the Ninja 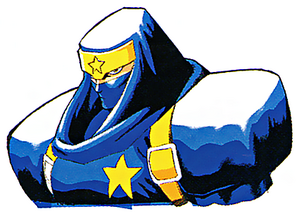 The actual sprite in Captain Commando 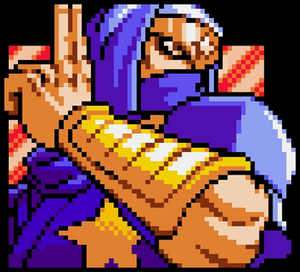 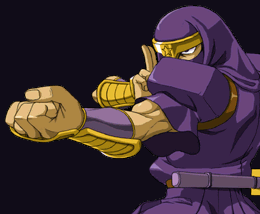 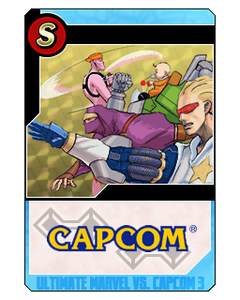 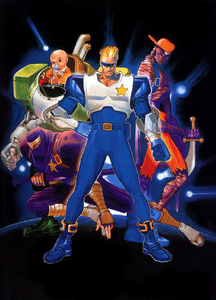 The Commando Team
Add a photo to this gallery

Retrieved from "https://hero.fandom.com/wiki/Ginzu_the_Ninja?oldid=1690984"
Community content is available under CC-BY-SA unless otherwise noted.