Listening to Jeff Back and Les Miserables

Giorno Giovanna (ジョルノ・ジョバァーナ Joruno Jobāna) is the protagonist of Part V: Vento Aureo (meaning "Golden Wind"). Giorno is Dio Brando's illegitimate son, conceived with Jonathan Joestar's stolen body. He is introduced as Haruno Shiobana (汐華 初流乃), a Japanese teenager living in Italy. He speaks of his intention to join the gang Passione and his dream of becoming a "Gang-Star" (combining "Gangster" and "Superstar"). Giorno wields the stand Gold Experience, which eventually evolves into the insanely powerful Gold Experience Reqiuem.

Giorno was born Haruno Shiobana, the son of Dio Brando/Jonathan Joestar's body with a un-named partner. Giorno's early years were plagued by his mother's neglect, his step-father's abuse, and teasing from his peers. However, one day he discovered a injured man in a grassy field, and when asked if he knew where the man went, Giorno said he was that man, both saving the unknown man and activating Golden Experience for the first time. The man promised to never forget him and always help him, and thus, his life vastly improved, with people now respecting and liking him. The man Giorno saved was actually a gangster, who watched over him as a guardian angel-like figure. This incident softened Giorno's soul, and thus, he forged his dream of taking over the local mafia and making it just as good as the man who saved him from a dark path.

In 2001, Koichi Hirose arrived in Naples, Italy at Jotaro Kujo's request to obtain a skin sample from a young man Haruno Shiobana to confirm him as the son of Dio Brando. Koichi ends up being scammed by Haruno, who now goes by the name of Giorno Giovanna whose stand Gold Experience allows him to transform inanimate objects into living organisms. After an altercation with gang member Leaky-Eye Luca, Giorno wins over his would-be assassin Bruno Bucciarati by revealing his goal to become a mafia boss to better Naples and end the drug trafficking plaguing the city's youth. Bucciarati agrees to introduce Giorno into the Passione organization, with Giorno taking a deadly initiation test from the morbidly obese capo Polpo. Giorno passes the test while convincing Koichi to cease his investigation, though he indirectly kills Polpo for his test causing a bystander's death. Giorno is placed in Bucciarati's group, which consists of Guido Mista, Leone Abbacchio, Narancia Ghirga and Pannacotta Fugo. The news of Polpo's apparent suicide results in Bucciarati being named the new capo after his group retrieved and donated Polpo's amassed fortune from the island of Capri to Passione.

Bucciarati is then given Polpo's mission from the boss, a mysterious figure who concealed himself from the public eye, to have his teenage daughter Trish Una brought safely to him when fending off Passione's Hitman Squad who seek to discover the boss's identity and take over the organization. After retrieving a key in Pompeii, the group acquire a Stand-sensing turtle named Coco Jumbo while taking a train to Venice while fighting against members of the Hitman Squad. But once at Venice and bringing Trish to Church of San Giorgio Maggiore, Bucciarati realizes that the boss intends to kill his own daughter to maintain his secret identity. An enraged Bucciarati saves Trish and survives the grievous injuries dealt on him by the boss' immensely powerful Stand, King Crimson. With the exception of Fugo, the rest of the group decide to uncover the boss's identity as they and Trish, who discovers her own Stand Spice Girl, fight for their lives against the boss's elite followers.

Following a lead, Bucciarati's group travels to the boss's origins on the island of Sardinia. Unfortunately, the boss is waiting for them, and swiftly kills Abbacchio. All seems lost until Giorno and company are contacted by someone who knows the boss's identity and suggests using a special Arrow to evolve Bucciarati's Stand. Bucciarati and the rest travel to Rome to meet the informant, who is revealed to be Jean Pierre Polnareff. Once again, the boss arrives first, and fatally wounds Polnareff. However, Polnareff stabs his Stand, Silver Chariot, with the arrow in his final moments as a gambit, evolving it into Chariot Requiem with the ability to swap the souls of all living beings and a mission to guard the Arrow. But Chariot Requiem goes berserk, causing a city-wide soul swap with Polnareff's soul now in Coco Jumbo's body. Polnareff explains to the group about the Arrow and his Stand, revealing Passione's boss is named Diavolo. The group and Diavolo chase after the user-less Stand, both sides focused on obtaining the Arrow. While Diavolo succeeds in weakening the Stand and killing Narancia, Bucciarati sacrifices himself to dispel the soul swap and pass the Arrow to Giorno. Giorno succeeds in upgrading his Stand to Gold Experience Requiem, and uses his new power to send Diavolo into a never-ending death. The final scene shows gang members kneeling before Giorno, suggesting that Giorno succeeded in becoming the new Passione boss.

After Diavolo's defeat, Giorno took over Passione, revealed himself as the boss, and worked together with the Speedwagon Foundation. Giorno then hires Fugo, Sheila E, and Cannolo Murolo to take down the narcotics team.

When Enrico Pucci attracted Ungalo, Rikiel, and Donnatello Versus to his location, Giorno was strangely not drawn to him. However, Rikiel's official biography mentions that Giorno may somewhere in Florida. Regardless, Giorno makes no appearance in the flesh.

Giorno is of a average height and build, with golden hair that curled in the front and braided in the back. Giorno also has green eyes. Giorno wears a suit (blue in the manga, pink in the anime), with wings on the shirt's collar, a large section of his chest revealed, and three ladybug pins on the body (Red in the manga, blue in the anime.) Giorno wears blue laceless shoes, with the same ladybugs on them.

When Giorno was younger, he had black, fairly standard hair.

Gold Experience is one of the most versatile stands. It has the ability to control life, which Giorno most often uses to produce plants and small animals. Both can be used for a variety of purposes ranging from disguise to tracking origins. Gold Experience Requiem is obtained after Giorno pierces Gold Experience with the stand-creating Arrow. It has the ability to turn the opponent's willpower and actions to zero. Whoever is killed by Requiem will also "have his death turned to zero", forcing him into a death loop for all eternity. 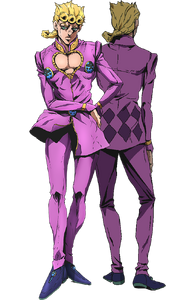 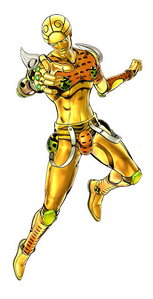 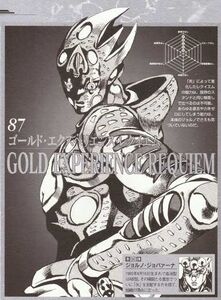 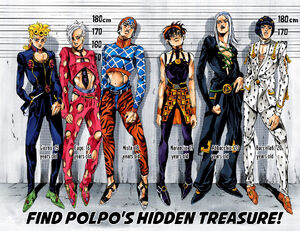 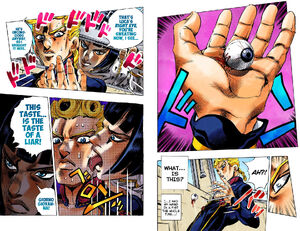 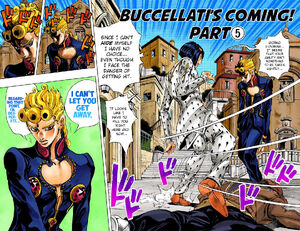 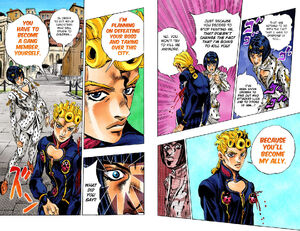 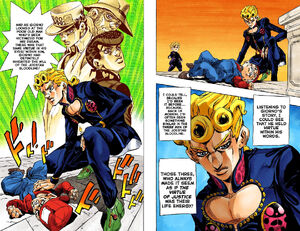 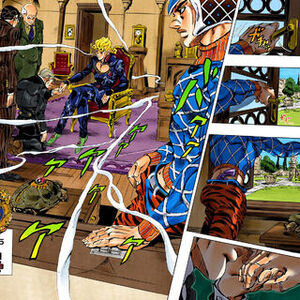 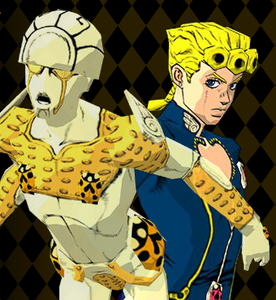 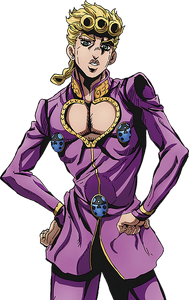 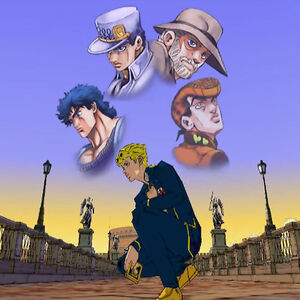 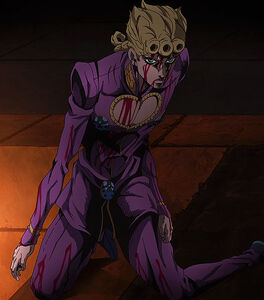 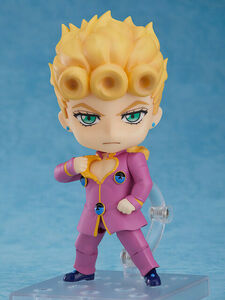 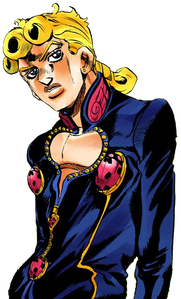 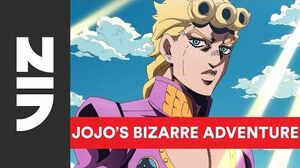 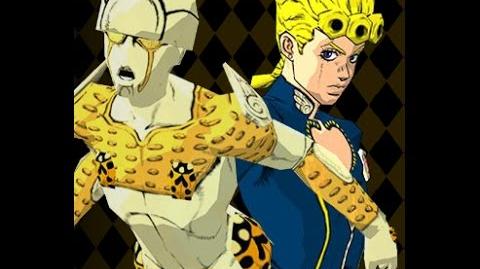 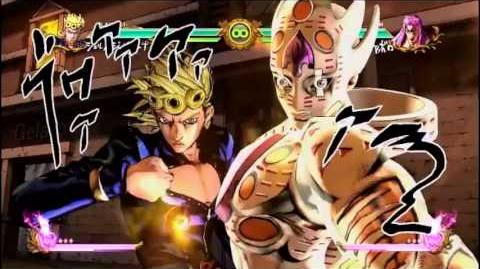 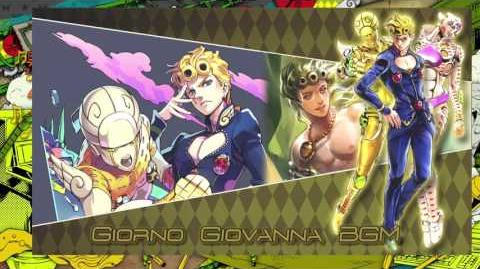 Retrieved from "https://hero.fandom.com/wiki/Giorno_Giovanna?oldid=1969320"
Community content is available under CC-BY-SA unless otherwise noted.