Gizmoduck, unlike Darkwing Duck, is a popular and well-liked hero. Because of this Darkwing Duck sees him as a rival of sorts. Gizmoduck is Launchpad McQuack's old friend from Duckburg. He is also the tritagonist of the second cliffhanger, Justice Ducks Unite.

Gizmoduck, first appeared on DuckTales as a bean counter (literally) named Fenton Crackshell, but he quit that job so that he could work for Scrooge McDuck as his accountant. The character is voiced by the late Hamilton Camp. Although he is not stupid, Fenton's ambitious ideas and hasty decision-making create serious problems for his boss. He is doggedly determined to make amends each time by any means necessary which can create even more complications until he ultimately succeeds, although this requires a large amount of patience with him.

Later on, Fenton finds a robot suit called GizmoDuck made by Gyro Gearloose. The code word to activate it is "Blatherskite", a word which Gyro assumes no normal person would use. (Unbeknownst to him, one of Fenton's most frequently used sayings was "blathering blatherskite".) As fate would have it, Fenton wanders too close to the suit and utters his favorite expression, thus gaining a secret identity as a superhero. From then on, Fenton always uses "blathering blatherskite" to become Gizmoduck, despite only needing the second word — it is possible that Fenton failed to realize he does not have to say the entire phrase, since Gyro was the only one present when he activated the phrase. This was further reinforced when his mother's remote control caused all the Gizmoduck armor to fall off Fenton, and attach itself to her when she mentioned the word blatherskite as part of her phrase "blathering blatherskite". Fenton's self discovery as how to attach and detach the armor served to show another of his savant abilities; he realized one of the words his mother spoke acted as a key code and repeated her last few sentences verbatim to find it; his memorization skills are outstanding.

The only characters privileged to know that Fenton is GizmoDuck are Scrooge McDuck and Fenton's mother, whom he refers to as M'ma. His mother usually wears a bathrobe and watches television in a rundown trailer, where she lives with her son (and sometimes serves as GizmoDuck as she has the same favorite exclamation as her son). Fenton is in love with Gandra Dee, Scrooge's bean factory receptionist. As Fenton, he is Scrooge's accountant, but as GizmoDuck, he is chief security guard for the money bin and Scrooge's personal bodyguard. Gyro Gearloose, creator of the Gizmosuit, does not even know who wears the suit.

Fenton has appeared as a guest star on Darkwing Duck on occasion as Launchpad McQuack's old friend from Duckburg as both identities. However his suit seemed to be smaller than the one from DuckTales, and lacks the black coloring in the upper arms - the possible explanation is that in the DuckTales episode "Attack of the Metal Mites", his suit was eaten by Flintheart Glomgold's metalmites, so in Darkwing Duck he probably uses a different one. He appears more as GizmoDuck than himself, and is a superhero rival of Darkwing's.

Originally, GizmoDuck was intended to be an artificially intelligent robot (and indeed in the series Scrooge originally intended to use a security robot designed by Gyro until he realized "it didn't have a brain" — it was so mechanistic it wouldn't even let Scrooge himself into his money bin), but the idea was later changed to the current one, akin to Iron Man or RoboCop.

Strangely, Fenton never appeared in the DuckTales comic book series, despite continuous letters asking that he appear. He did, however, appear in the comic stories printed in Disney Adventures, mostly showing up in Darkwing Duck stories, as well as the DuckTales video game for the Nintendo Entertainment System.

GizmoDuck (along with Bubba and an unused character named Space Duck) were created by Tad Stones around the same time Chip 'N' Dale were added to Rescue Rangers. GizmoDuck was originally called Robo Duck, which coincidentally is his name in Japan and the Netherlands, and also explains the "R" shaped insignia on his chest.

In the 2017 series Fenton is reimagined as a Latin-themed character and is renamed as Fenton Crackshell-Cabrera. Unlike the original series, Fenton works as Gyro's unpaid intern instead of being an accountant. Personality-wise he is mostly the same as his original counterpart, but has better self-confidence.

Unlike the original series, Fenton has a more difficult time of being able to maintain his secret identity as Gizmoduck, where aside from his friends (Scrooge, Gyro, Huey, Dewey, Webby, Launchpad) in the episode The Dangerous Chemistry of Gandra Dee, he keeps a notebook of everybody who knows he is Gizmoduck. The only exception is Darkwing Duck, due to his ability of misinterpreting things as a result of his ignorance as seen in the series finale. 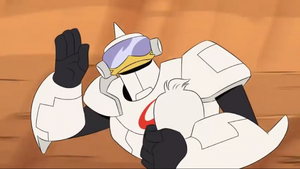 Gizmoduck in the 2017 DuckTales series