Glacius is a character from the video game series Killer Instinct.

He is voiced by Kevin Bayliss in the first two games, and by Jean-Edouard "Jedsound" Miclot in the 2013 reboot.

Glacius is an alien from the unknown planet, who was captured by Ultratech and forced to fight in Killer Instinct, supposedly to prove aliens' inferiority. He eventually defeated Cinder and escaped to his homeworld. But 2000 years in the past, the remaining combatants have been thrust back in time, and Glacius' ancestors are all trapped on Earth. One of them, also named Glacius, seeks to free them and return home.

The reboot sees him crash-land on Earth, attempting to stop ARIA and the forces of Ultratech from using his race's technology for evil. 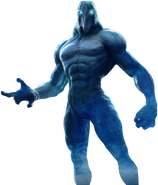 Add a photo to this gallery
Retrieved from "https://hero.fandom.com/wiki/Glacius?oldid=1830322"
Community content is available under CC-BY-SA unless otherwise noted.