Glimmer (She-Ra and the Princesses of Power)

To Protect Bright Moon from the Evil Horde

Princess Glimmer is one of the two main tritagonists (alongside Bow) of the Netflix Original series She-Ra and the Princesses of Power.

She is the princess of Bright Moon, and inherited her magical powers from her mother, Queen Angella.

A sweet, enthusiastic and driven girl, Glimmer truly believes that she can achieve anything if she has her friends by her side. Always looking to forge her own path in life, Glimmer is motivated by love, loyalty, friendship and fairness.

She is voiced by Karen Fukuhara, who also voiced Kipo Oak in Kipo and the Age of Wonderbeasts and played Katana and The Female in The Boys.

Glimmer is shown to be a short tempered and often quite stubborn girl. Glimmer is also shown to be a rebel girl as she often disobeys her mother, and even when she was sented in her room she tends to act against her mother's wishes. Her rebellious personality has manifested itself in the form of impulsiveness as she often acts without thinking, which lands her in trouble with her mother or on the battlefield.

Glimmer in general has shown to be a kind, enthusiastic, and supportive girl who is a very loyal friend to the people she befriends, and is willing to accept consequence to protect others. An example is when Shadow Weaver attempted to erase Adora's memories, Glimmer forced herself to teleport to save Adora, which lead her powers to glitch and cause her pain.

Glimmer has shown to doubt herself when she realizes what her impulsive approach gets her and needs others to reassure her as she admits she feels that others don't take her seriously.

Described by her mother; Glimmer is a headstrong, temperamental and stubborn girl, but also brave, as she is willing to stand by her friends and fight despite what her circumstances are.

In season 4, Glimmer's personality takes a darker turn. She begins to drive her friends away, and begins to blame them for her mother's death, rather than the Horde. She mostly listens to Shadow Weaver, ignores genuine advice, and abuses her authority as queen. She devotes her entire time to destroying the Horde by any means necessary, exemplified by attempting to use the Heart of Etheria despite the warnings that the planet will be destroyed.

In season 5, Glimmer learns from her mistakes and strives to become a better person. She becomes more mature and less childish like her mother, but still brave, like her father.

Glimmer appears as a young girl, who has a somewhat pudgy body. She also has pinkish-purple hair cut in a short bob and purple eyes. She wears a blue cape in the shape of wings and has two small wings on her back like her mother.

Glimmer can manipulate light, allowing her to emit pulses or strobes to blind or disorient others, fire laser-like cutting beams or "solid-photon" concussive-force beams, illuminate large areas with radiant light, create explosive-plasma fireworks, and refract light to make herself (or other objects) invisible. In close proximity to her mother, she has the power to fly unaided. She has also demonstrated limited magical abilities, such as a holding spell, as well as short-range teleportation. 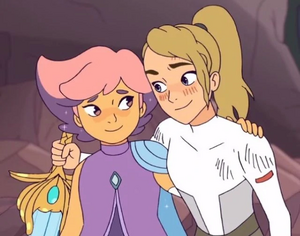 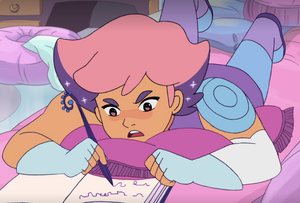 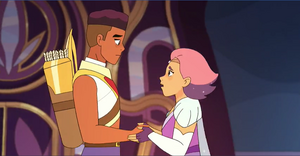 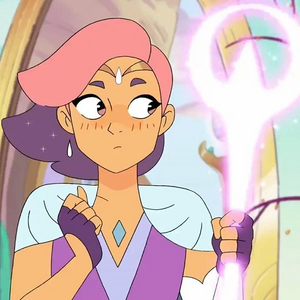 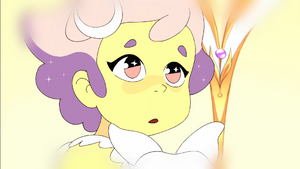 Glimmer as a little girl.