Relocate and provide for those who were misplaced after the Blip

The Global Repatriation Council, also known as the GRC, as an organization from the Marvel Cinematic Universe, primarily featured in the television series The Falcon and the Winter Soldier. They are a council of officials and representatives from various countries of the world who seek to provide for and relocate those displaced by the Blip.

In 2023, the Hulk used the Infinity Gems to bring back the half of all living creatures that Thanos had killed in 2018, in an event that would later be referred to as "The Blip". In late 2023 and early 2024, the Global Repatriation Council was founded with the purpose of helping those who were brought back and subsequently displaced by the Blip, such as those who returned to find their homes or jobs occupied by someone else, those who were unable to adapt to new borders and laws, or those whose countries would not take them back in. This lead to the GRC creating refugee camps for those displaced, though they were difficult to upkeep due to the sheer amount of refugees. The poor conditions of the camps and the GRC's plan to deport the refugees back to their countries of origin lead to resentment among some of the refugees, and later the creation of the Flag Smashers, who desired to abolish borders and nationalities who sought to end the GRC.

GRC camps would be the location of a skirmish between the Falcon, Bucky Barnes, John Walker, Lemar Hoskins, and the Flag Smashers, which ended with Hoskins' death. Walker, in a fit of rage that his friend had been killed, tracks down and brutally murders a Flag Smasher outside of the camp, leading to him being stripped of his military title and authority.

Meanwhile, Flag Smasher leader Karli Morgenthau tries to kill the hostages in the cars, but they are saved by Walker and Barnes. After the Falg Smashers are defeated and Morgenthau killed, Wilson delegates with the GRC, appealing to them to consider the potential damage of their well-intentioned but potentially harmful vote, lest they be faced with more resistance by other terrorist groups similar to the Flag Smashers. The GRC recognizes his point and decides to take time to reevaluate their plans before voting on them, still primarily dedicated to helping those who have been displaced, but doing so with the victims' inputs rather than just their own. 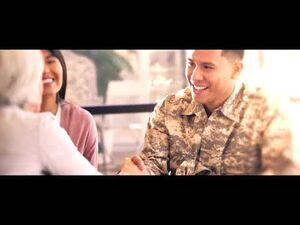 The Falcon And The Winter Soldier episode 3 - GRC Ad