Gloomius Maximus is a recurring character in Rolie Polie Olie, originally the main antagonist of Rolie Polie Olie: The Great Defender of Fun. He is the archenemy-turned-friend of Space Boy, Space Dog, Willy, Wally Jolly, Olie, Zowie (his best friend), and Billy. His collaborators are the Group of Seven Soldiers who help as he asks for support.

Initially, Gloomius hated anything fun and happy in general. According to what he told Zowie, this was because he never had a birthday party of his own as a little bot nor was he ever invited to one, so he decided that if he cannot be happy, no one can.

Gloomius began to use his un-funerators to suck the happiness and fun out of any bot, object, and planet he encountered. His arsenal of un-fun weaponry included his Ultra Gloomerator green puppy Glum Beam, capable of rendering a person "downer than the downy dumps" and fall asleep and unable to wake up. Only the power of laughter is capable of undoing the effects and sending him into retreating. Like all pirate stereotypes, he took anything that was not his, such as Zowie's Super Silly Ray in his first appearance. He used to hate laughter (his former only weakness) as it forced him to retreat.

He is very ticklish as seen when he burst out laughing when the Jollies used their swords to tickle him and when Olie threw a Tickle-Me-Pickle at him. He was immune to such fun weapons as the Super Silly Ray due to his extremely bad mood, but after giving it a tune-up, Olie can blast a billion bubbles at him and he finally started to feel its effects and acted jovial and giddy. After getting his happy gear running for the first time in so many years due to Olie using the Super Silly Ray and Zowie's act of kindness of inviting him to her birthday party, he became a completely different bot all together, declaring, "I'm the happiest bot in the universe!".

Afterwards, Gloomius had become a mischievous, fun-loving anti-hero and values Zowie as his best friend.

Gloomius looks as though he had parts that came straight from a junkyard. His head has a blue paint job and appears to be rusting around his eyes, under his square nose, and on his red lips.

He wears a red pirate outfit, a golden belt with the letter G on it, a red bicorne hat with a feather on it, a single black boot on his left foot and has a brass sword-like appendage for a left hand and a brass peg leg replacing his right leg. 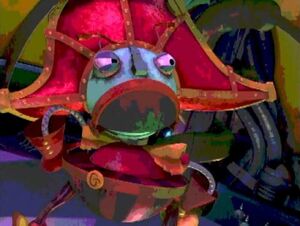 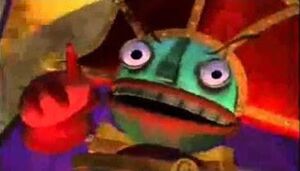 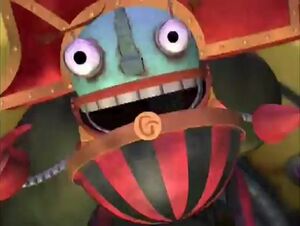 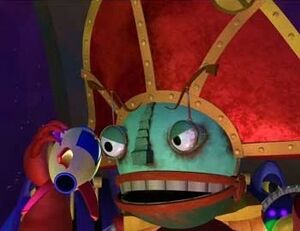 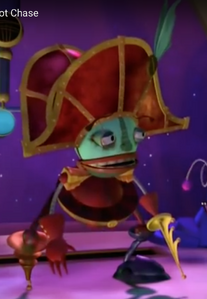 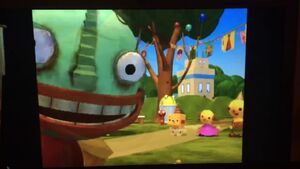 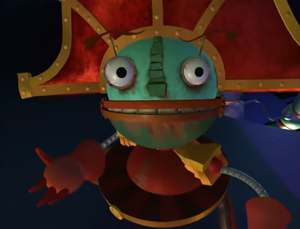 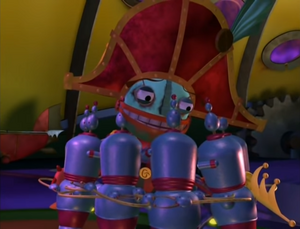