Spending time with Mumble and her son, Erik
Teaching songs to the kids

In Love
Parent
Gloria is the deuteragonist of Happy Feet and a major character in Happy Feet Two. She is a female emperor penguins who is known as one of the best females singers. She is Maurice' and Michelle's daughter, Mumble's wife, Erik's mother, Memphis and Norma Jean's daughter-in-law. She was treated similarly to how Norma Jean was, as all of the males wanted to mate with her. Her heartsong is "Boogie Wonderland" by Earth, Wind & Fire.

In the first film, she was voiced by the late Brittany Murphy as an adult and Alyssa Shafer as a child. In the second film, she is voiced by Pink.

Gloria's father, Maurice, was a close friend to Mumble's, Memphis. She is first seen as a child when she and her father goes to Memphis, who was worried when his Egg does not hatch when the other penguins' do. Gloria spots the egg out of curiosity, taps on it and hears a response from inside. Two feet break from the egg and as they begin to walk off down a snow bank, Gloria playfully addresses the egg as "Mr. Mumble" thus naming him when he hatches.

Gloria became a close friend to Mumble, and the two of them were also classmates at the school. Unbeknownst to Gloria, Mumble also had a secret crush on her. It's unknown if Gloria already returned his feelings from childhood or just developed a crush on him after adult. But she still remained good friends with Mumble, even defending him when the others laughed at his terrible singing voice.

Gloria is later seen as an adult at the graduation party. She sings "Somebody to Love" for everyone, but Mumble gets só caught up with the music, than he himself tries to sing. His out-of-tune singing causes the other penguins to chuck him out. Next day, Mumble get lost from Emperor-Land because of a leopard seal attack.

Gloria is only seen again when Mumble returns to Emperor-Land with his new friends, Ramón, Nestor, Lombardo, Rinaldo and Raul. Mumble tries to impress Gloria, as it was mating season, but he knows he can't sing, so Ramón hides behind Mumble and sings to Gloria. She doesn't fall for it and at first, rejects Mumble, but when he dances to her heartsong, she ends up falling in love with him, and many other penguins dance with them. Unfortunately, Noah, the leader of the emperor penguins, see their antics and banishes Mumble for not changing his ways.

Feeling Mumble's banishment was unfair (it actually was unfair, to tell the true), she decides to go with him. She then follows him, Ramón, Nestor, Lombardo, Rinaldo and Raul, and meet them no much time after they gained Lovelace's help. However, Mumble did not wanted Gloria to go with him, as he knew it could be dangerous, and Gloria could die. In order to protect her, Mumble jokingly insults her singing voice into driving her away, and then she leaves to home. After she returns, she and Seymour, a childhood friend of Mumble and Gloria, started to teach singing to children emperor penguins.

After Mumble returned home from the aquarium, he reunites with Gloria. He at first mistaken Gloria for having children with Seymour, until she explained they were just assistant teachers. Mumble then tries to convence the other emperor penguins to dance to the humans, so they will give them their fishes back. All the penguins (except for Noah and the Elders) starts training Mumble's dancing. The humans then arrive in a helicopter, and all the penguins (even Noah and the Elders) dance for the humans, who take footage of them and the United Nations decide to protect the penguins' food supply.

In the end, all is well. Mumble becomes a hero and gets married with Gloria. All the emperor penguins dance with Mumble, alongside Ramón, Nestor, Lombardo, Rinaldo, Raul and Lovelace.

In the sequel, Gloria is now Mumble's wife and they have a son named Erik. She is first seen at the Opening Medley dancing and coming to Mumble. He tap dances to Gloria as the emperor penguins continue dancing. They soon find their son Erik shy around the other children. Mumble go ask Erik about dancing together. But Erik falls and gets embarrassed by the other kids. Erik faults his father Mumble for making him join the dance. Erik and his two best friends, Atticus and Boadicea, then follow Ramón to Adélie-Land. This makes Mumble, Gloria, Seymour, who is now Atticus' father, and Miss Viola, Boadicea's mother, worried about them. While Gloria, Seymour and Miss Viola still search for them at the Emperor Land, Mumble goes to Adélie-Land to search for them, suspecting they followed Ramón.

Later on, Emperor-Land is trapped by a massive glacier of ice and snow, with Mumble, Erik, Atticus and Boadicea as the only penguins to be free. Mumble then sends Boadicea to go to Adélie-Land to find Ramón and Lovelace to bring as many adélies as they can. After Boadicea arrives with the adélies, Lovelace and Sven, they tries to keep the emperor penguins feed by bringing fish for them. Later on, Lovelace get the attention of some humans to build a way out for the penguins. However, a storm starts and the humans leave. Later, the sea is frozen, turning impossible for Sven and the adélie penguins to bring fish for the emperor penguins. Desesperated, several emperor penguins slide down a mountain in order to fly outta here. The penguins, still believing that Sven is a penguin (except for Mumble) asks him to teach them how to fly. Sven almost manages to take Seymour outta there, but he fails and then reveals his true species, making the penguins upset. Mumble then realized that if they danced enough, they could move the snow into making a way outta there. However, several penguins falls into the Doomberg, including Atticus, Boadicea, Lovelace and Carmen, Ramón's new love interest. Not wanting to be without her, Ramón jumps into the Doomberg, thus finally winning Carmen's heart. The only ones to be free are Mumble, Erik, Nestor, Lombardo, Rinaldo, Raul and half of the adélie penguins, while the other half fails into the Doomberg. They still try to dance, but with several penguins fallen, their moves is not enough. Sven tries to help, but still is not enough. Mumble and Erik then goes to the elephant seal land to asks for the help of their new friend, Bryan. After they arrives with the elephant seals, they all (even Erik) tap dances, making enough snow and ice fall to create a sort of stairway to the top off the glacier.

The penguins are now free, Mumble makes pieces with Erik (they apologize each other), they reunites with Gloria, the penguins forgives Sven for his lies and Sven starts living with them. The film ends with the penguins and Sven looking for a new home.

Gloria is smart, independent, strong and confident. She is one of the most tallentest singers at Emperor Land, but she is kind of proud and gets very mad when her singing voice is insulted. This could significate a hint of vanity in her. However, she is still soft-spoken, patient and understanding. She is similarly kind and pleasant, and doesn't tolerate Mumble or anyone else being teased. For all her confidence though, it is hinted that she há insecurities which she covers by bossing others around. That can be seen in the sequel, after Mumble and Erik's disagreements, she orders Mumble to go fishing, in a rather angered tone.

Gloria seems to have a strong sense of justice, and is one of the few emperor penguins who never mocked Mumble for his differences, and she is completely without prejudice towards others. She is eager to help her friends and takes care of them all, and is somewhat a natural mother. That can seen when she sings "Bridge of Light" to conforts Erik after his disagreement with his father. Her sense of justice is seen when Noah banishes Mumble in the first film, and she judged it unfair, as Mumble was being blamed for the fish scarcity just do being different. This led her to follow Mumble on his journey, until he drive her away by insulting her singing voice in order to protect her from the dangers of his journey.  Gloria is very charitable and is a refined and elegant female penguin.

Despite her polite demeanor, she is not above raising her voice when she gets easily angered or when she faces something unfair. An example of this comes when her classmates at school laughed at Mumble's terrible singing voice, and she claimed that it was not funny. Her temper can also rises when one of her relatives or friends does something either stupid or something she does not like, such as when Noah banished Mumble or when Mumble yelled at Erik. She can also be stubborn, as seen when she followed Mumble on his banishment, and she refused to go home, forcing him to insult her singing into driving her away in order to protect her. She can also be brave, heroic and fearless, such as when the Boss Skua tried to kidnap one of her students for lunch, and she fearlessly hited him and challenged him to face someone on his own size. Despite her lack of prejudice towards others, she may mocks others, if she takes it as kidding. That can be seen when she and Mumble mocks Sven and she jokingly asks if Sven is not related to Mumble.

When she was a child, Gloria was very curious and naïve, as seen when she asked Memphis if his egg was empty after Memphis' egg took too long to hatches, and she even asked if she could have it. She was also extremely playful (though she is still playful as an adult), as when she addressed Memphis' egg as "Mr. Mumble" after two feet break from the egg and they begin to walk off down a snow bank. Despite her naivete, Gloria was apparently the smarter student at Miss Viola's class, as she was the only who correctly answered Miss Viola's questions, and she did not even one wrong answer.

As a child, not much distinguished her from the other children in Emperor-Land. She was light grey, fuzzy, with brown eyes, and a dark grey partch on her chest.

Gloria has a white underside with a yellow patch on her chest, like other female Emperor Land. The feathers on her head are black, and some feathers are colored indigo. She also has brown eyes.

In the sequel, her physical appearence is different than the first film. Her back and tail feathers are slightly brighter. As well, the yellow patch changed to gold, but her yellow color is still visible, only slightly. 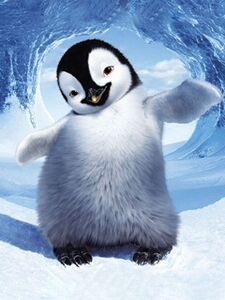