Wrathful
Glória Marie Delgado-Pritchett (neé Ramirez), known as Gloria Pritchett, is a character is the sitcom Modern Family, is the feisty, fun-loving Colombian wife of Jay and the mother of Manny and Joe who later becomes an American citizen in Patriot Games.

Glória was born in Colombia to Pilar and Fulgencio Ramirez. She has other siblings, including Sonia and two unnamed brothers. Having lived in a poor and crime-filled village, she is evidently used to doing manual labor and frequently implies violence as a solution to problems. She states that she had her own machete when she was young ("Fizbo"), and has considerable comfort in killing animals due to relatives who are butchers ("Unplugged"). Crazy traditional, Gloria firmly believes in superstitions and that her family is cursed because her great-great-grandfather made a deal with the devil, causing many of her relatives to end up in jail ("Larry's Wife"). Gloria also frequently mentions that she used to join (and win) beauty pageants where she showcased her ventriloquist dummy Uncle Grumpy, later seen to be strikingly similar to Jay ("Yard Sale").

When she was younger, she received a letter addressed to Sonia with an opportunity to leave for the US. She used the letter and ends up leaving instead of her sister. This would later cause friction between the two ("Fulgencio"). Jay mentions that she had been deported twice ("Open House of Horrors").

She also stayed in Texas and Florida for some time, both of which she became wanted by the police. Until the events in "Goodnight Gracie", she was wanted in Florida for subletting an apartment which her roommate turned into a brothel after she left. It is also in Florida where she gave birth to Manny in 1999.

During the 1990s, Gloria was married to the Javier Delgado. Their wedding ceremony ended abruptly when drug dealers burst in and assassinated the judge while they are reciting their vows ("The Incident"). After getting divorced and having to raise her son alone, Gloria worked as a cab driver and a hairdresser at a salon near her apartment in the slums. Jay said he used to sweat a lot while visiting her apartment, having to climb three flights of stairs. ("Two Monkeys and a Panda")

Gloria met her future husband Jay at a diner while she was with Sonia. Jay (who could only see Sonia as Gloria's back is turned to him) sent a pie over to Sonia but she missed it as she went to the bathroom. Gloria later comes over to thank Jay thinking it was for her ("Fulgencio").

Gloria is often characterized by her loud, outspoken attitude noticeable even from a distance that one neighbor once thought they own a parrot ("Unplugged"); her voice is known for driving the next-door neighbor's dog mad, setting off car alarms and scaring several drivers into pulling over because it reached a pitch akin to a police or ambulance siren. She is shown to be very expressive in her speech; often imitating the sounds of things when she does not know what to call it, and shouting loudly when she is upset. Due to her fiery nature, she often clashes with Claire, another strong female. She often feels that her race is a problem with people, such as failing to hail a cab which she immediately blames on her being a Latina only for Haley to point out that its just a yellow car. She also has a considerable temper which is comparable to a volcano: sudden, destructive and with many casualties. When two teens egged her house on Halloween, she charged after them screaming "You put egg on my house, I kill what you love!". When angered or frustrated, she has a tendency to rant vociferously in Spanish.

She is shown to enjoy the limelight, as she makes effort to be noticeable especially when it comes to her appearance and tends to get jealous when other women get more attention than her, as seen when she fires attractive female babysitters from her house so they don't outrank her ("The Help"). Gloria also states that all friends of Jay has hit on her, except Shorty ("Fifteen Percent"). She frequently uses her good looks and sexy features to her advantage, which is why she becomes frustrated when she tries to help Claire's campaign for office using the telephone, as people do not see her and respond as she wants ("Election Day").

She is shown to be very proud of her Colombian roots and insists on carrying on several of her Colombian traditions with her new family, and encourages Manny to learn more Spanish ("Queer Eyes, Full Hearts"). A devout Catholic, Gloria is shown to value strong family ties and religion above all else. Jay says that Gloria likes to celebrate even little events he would consider insignificant ("Two Monkeys and a Panda"). She has a disturbingly high comfort level when it comes to killing or violence, especially where animals are concerned; she brutally beheaded a rat with a shovel and left its head to "send a message to the other rats", and then set off for church ("Unplugged").

Her character is also known for having a very loud and sometimes described as annoying voice. There is example of this is most episodes with her in as she shouts a lot. In an interview with the cast, many of them said how Sofia is a lot like her character and can be quite loud. Sofia explained how their is a running joke with the cast where the would like to gag her. She even said that sometimes the crew places tape over her mouth while on set or the time she was tied to a chair and gagged with a cloth wrapped over her mouth to make her shush. 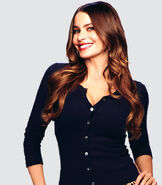 Add a photo to this gallery
Retrieved from "https://hero.fandom.com/wiki/Gloria_Pritchett?oldid=1948452"
Community content is available under CC-BY-SA unless otherwise noted.