Humanoid
Gnomeo is the son of Lady Bluebury and her late husband, the husband of Juliet, the male leader of the Blue-Red Gnomes and the main protagonist from the 2011 film Gnomeo & Juliet (a garden gnome adaption of Romeo & Juliet) and one of the two deuteragonists (alongside Juliet) from 2018 sequel Sherlock Gnomes.

He likes to lawnmower races against his rival, Tybalt, as well as having a romance with Juliet. 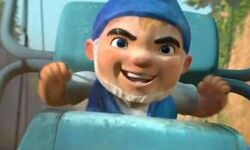 Gnomeo with his mother Lady Bluebury