The Go-Ongers are chosen by the Engines to become their partners. Using the power of Souls set into their partner Engines and arsenal, these rangers fight against the Barbaric Machine Clan Gaiark.

Go-Ongers refers to the first five members of the team. However, it is also used as a catch-all term for when the team includes Go-On Wings.

A year after the final defeat of Yogoshimacriten, the Go-Onger tracked down the final true leader of the Gaiark, Pollution President Batcheed, to the unexplored Braneworld of Gunman World. In a battle the Go-Onger appeared to handle with ease, Batcheed used his abilities to suck the entire team, human and Engine, into a dimensional rift that threw them through the various other Braneworlds. Sosuke returned to the Human World, but encountered another squadron fighting Ugatz: the Samurai Sentai Shinkenger. Although trying to assist to gain their trust to help save the other Go-Onger, Shinkenger leader Takeru Shiba takes offense about the more cheerful, cocky nature of Sosuke and doesn't trust or believe him regarding his mission, although the other members of the team agree to help. Batcheed is ultimately tracked down to the sushi cart of Genta Umemori (Shinken Gold), who had attempted to recruit the Gaiark Ministers, yet fail due to their happiness in their deceased state and desire to stay in the Sanzu River. Sosuke and the Shinkenger attack Batcheed, but the Gaiark leader sends the samurai hurtling through other the other Braneworlds, leaving behind only Takeru and Sosuke in the Human World. Genta and Mako Shiraishi are sent to Christmas World, where they meet with the Go-On Wings; Kotoha Hanaori and Chiaki Tani are thrown to Samurai World alongside Renn and Gunpei; and Ryunosuke Ikenami is thrown into Junk World alongside Saki and Hant. At the request of Sosuke, Speedor ends up searching through all the Braneworlds in order to find a way to reunite everyone and get them back to the Human World to handle Batcheed.

The Gaiark leader's ultimate plan involved his manipulation of the Sanzu River's water into fuel for his Batcherium Plant, which ultimately would be used to pollute all Braneworlds, including the Human World, simultaneously. With the assistance of the Gedoshuu Homurakogi, Batcheed faces Shinken Red and Go-On Red once more, with the duo finally appearing to break apart into fighting each other, but ultimately using it as part of a diversion to save their respective partners (Hikoma Kusakabe and BOMPER) and allow time for Speedor to reunite all Shinkenger, Go-Onger and Engines into a united front. Through a combined effort, both the samurai and racing squadrons put a stop to Batcheed's plans, ultimately destroying him and the Batcherium Plant on the moon and saving all universes.Samurai Sentai Shinkenger vs. Go-Onger: GinmakuBang!!

Years later, the Space Empire Zangyack invaded Earth. This threat was so great that all of the first 34 Super Sentai, including the Go-Ongers, were needed to oppose them. The 34 Sentai put up a valiant fight against the ground forces, but when the Zangyack fleet itself attacked them, Akarenger told everyone to combine their powers and save the Earth. This destroyed the Zangyack fleet and resulted in the loss of their powers, which resurfaced as Ranger Keys, that were dispersed throughout the universe.

The keys were collected by AkaRed, and later utilized by the 35th Super Sentai, the Gokaigers, a group of five people from different planets who came to Earth in search of the Greatest Treasure in the Universe. Ep. 1: The Space Pirates Appear During the battle with the Black Cross King, Saki was one of several Super Sentai warriors who granted their greater powers to the Gokaigers. Gokaiger Goseiger Super Sentai 199 Hero Great Battle

While the Gokaigers protected Human World from Zangyack, the Engines had problems of their own in Gunman World, a Gaiark remnant led by Pollution President Babatcheed. Sosuke later appeared to assist the Gokaigers when BOMPER requested to be taken to him after appearing on the Gokai Galleon. After he was told of the situation in the Gunman World, and the Gokaigers refused to help, Sosuke donned his Go-Onger uniform once more. Using a trampoline, Sosuke tried to get through the dimensional portal that led there by himself, to no avail, until the Gokaigers changed their mind and let him go aboard the Gokai Galleon. Despite having lost his powers as Go-on Red, Sosuke still managed to hold his own against a troop of Ugatz. During this situation, he found out his partner, Engine Speedor and Engine Bearrv had gotten married and was surprised to find out that they have a son. However, even though the crisis in the Gunman World had been averted with Barbaric Officer Chirakashizky's defeat, there was still Pollution President Babatcheed to deal with, but since he closed off the portal back to the Human World and the available Engines had not enough power to break through, they had to head to Machine World to convince Speedor and BearRV's son, Machalcon, to help them. Despite Sosuke's emotional pleas, Machalcon refused to stop and was only tamed when Gokai-Oh (without its legs) forced itself on him. After having helped the Gokaigers fully unlock the Go-Onger greater power and defeat Babatcheed, Sosuke parted ways with the pirates, going back to being an auto racer. Ep. 35: Dimension on the Other Side Ep. 36: Partner Pirate

After the Gokaigers finally defeated Zangyack, they returned the Ranger Keys before they left Earth to find the second Greatest Treasure in the Universe. Miu was seen receiving her Ranger Key and saluting the Gokaigers. It is assumed the other Go-Ongers have their powers back as well. Final Ep.: Farewell Space Pirates 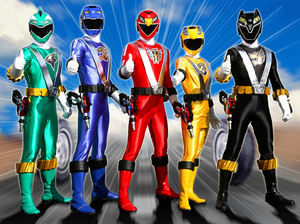 Retrieved from "https://hero.fandom.com/wiki/Go-Ongers?oldid=1620019"
Community content is available under CC-BY-SA unless otherwise noted.