Wipe out all the Roidmudes. (formerly)

Stop his father Tenjuro Banno from taking over the world.

Go Shijima (詩島 剛 Shijima Gō) is one of the two triangonists in Kamen Rider Drive (alongside Chase), and the series' Secondary Rider.

He is Kiriko Shijima's younger brother, the son of the Roidmudes' creator Professor Banno, and a freelance photographer who utilizes Signal Bikes to transform into Kamen Rider Mach (仮面ライダーマッハ Kamen Raidā Mahha), as well as Kamen Rider Drive's Shift Cars for additional power.

He had been stationed in America, but returned to Japan to aid with the emerging Roidmude crisis. Go is prejudiced towards the Roidmudes and goes to great lengths to destroy all Roidmudes, even the ones that protect humanity and the ones that desire to live in peace.

Go has a very impulsive and outgoing personality, whose hyperactivity may have worsened during his time in America. He is also very intelligent, which coupled with his robust physique, makes him a very capable detective. He is also pretty competitive, as seen with him challenging Shinnosuke to find and finish Gunman. A freelance cameraman himself, Go has a habit of picturing any nearby couples either intentionally or not.

He has a flair for drama and is also quite the jester. Despite being entirely capable of subtlety, he prefers to make his entrance in a proud, flashy manner, going so far as to call his sister to his debut battle in Japan, just so that she can witness how cool he is. These traits ultimately resulted in him liking to rush into danger.

In his battles with the Roidmudes, he likes to repeat his introduction of himself whether he starts fighting, even though he has said it in Episode 12 already, presuming to show off the coolness of himself. However, as shown in Episode 14, in his first fight with Roidmude 096, he is so determined to finish his introduction that he gives the Roidmude a chance to attack him, and even escaping. In his next encounter with him and Roidmude 069, he skipped it and goes straight to the fighting part. He fixed this problem afterwards in future episodes by saying it really fast.

For all of his bluster, however, Go is also a realist, ready to use any means to defeat his enemy, even considered himself much of a monster as the ones they fight due to the fact that both the Kamen Riders and the Roidmudes use Core Driviars as the source of their powers. And also, he bears the pain of taking the responsibility of what Dr Banno, who in fact is also his father for the corruption of Roidmude.

He does have a serious side, especially when it is to protect his sister from danger. He has a big hatred to the Roidmudes that's near fanatical in belief, hating even Chase, despite the android's return to his normal heroic persona. His sense of justice seemed to have altered due to his time in America, having suggested that they should kill Taga when he fused with 007 into the Sword Roidmude, and came close in killing Reiko out of rage when she was revealed to be the Seeker Roidmude when she manipulated him into a trap.

His hatred for Roidmudes is so great that he even went so far to say that Chase is just the 109th Roidmude, ignoring his past heroics as Protodrive or his return as Kamen Rider Chaser. In Episode 22, even when Chase temporarily got back to his original settings during the time he was brainwashed by Medic, he still doesn't budge, continuing his thoughts about all the Roidmudes are evil, unaware that it was all her plan to lure Drive out. However, he does show a little bit of sympathy to Roidmude 072 back in Episode 20, but those feelings were only temporary once. After his mission to save Banno, he revealed that he is no friend of Chase but not attacking him. This proves that Go will only attack the Roidmude whenever they make a ruckus and never be their friend. But later on, he is more friendlier to Chase.

Because Go is too young to understand about what kind of father Banno was like, he thought Banno cared for his family, until in his adult life, finally seeing his father's true colors behind the Roidmude crisis on letting them run wild, and become the true enemy of humanity. While this revelation hits him hard, he ultimately vowed that he would destroy any threats to humanity, even if it was his own father. This was later shown after Brain's death in sacrificing his life to save Medic from Sigma Circular sacrificial, Mach finally sees his father is indeed an absolute devil for the cause of Roidmudes' madness and has no heart in considered anything around him just a mere subjects, just like what Krim, Heart and Kiriko warned about Banno. 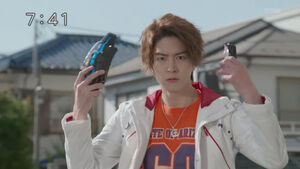 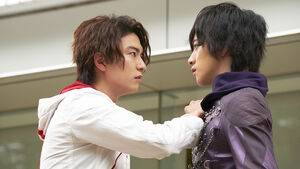 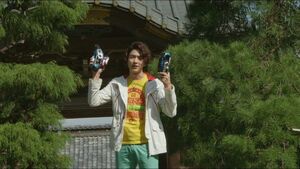 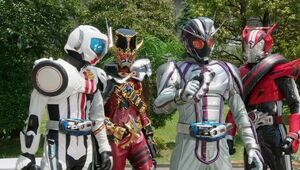 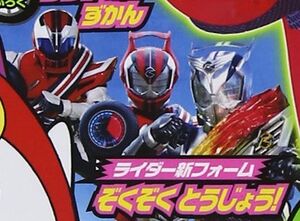 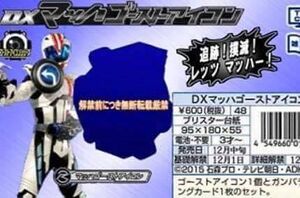 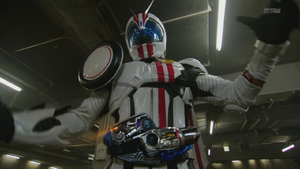 Mach inserts Signal Chaser into the Signal Landing Panel of his Mach Driver Honoh and then he... 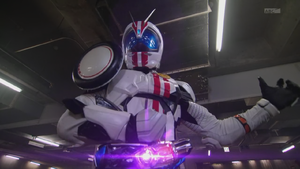 pushes it back down, causing... 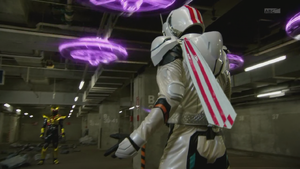 four wheels shoot out while... 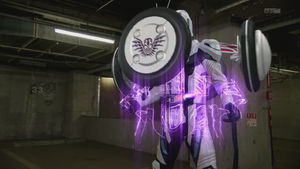 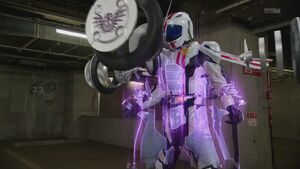 materialize Chaser's lower half armor around Mach as... 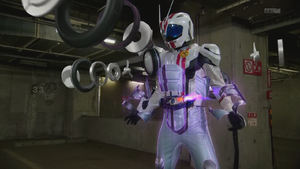 the wheels separate into various pieces while... 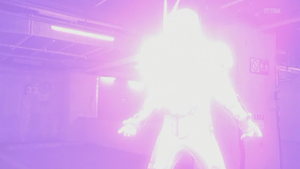 the armor merges with his body in order to... 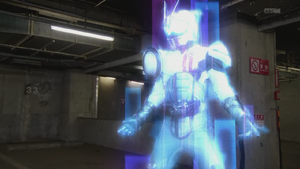 cover him in a blue energy light and... 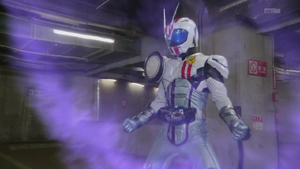 spread out purple energy, thus completing his transformation into Kamen Rider Chaser Mach
Add a photo to this gallery

Retrieved from "https://hero.fandom.com/wiki/Go_Shijima?oldid=2144349"
Community content is available under CC-BY-SA unless otherwise noted.