Heroes Wiki
Register
Don't have an account?
Sign In
Advertisement
in: How to Train Your Dragon Heroes, Cartoon Heroes, Fighters,
and 34 more
English

Gobber the Belch is a major protagonist in DreamWorks' How to Train Your Dragon series. He is a veteran warrior of the Hairy Hooligans Tribe and a long-time friend and adviser of Stoick the Vast.

Gobber is Stoick's best friend and Berk's blacksmith and dragon dentist. Apparently, they've met when Gobber talked with Valka, to which Stoick replied rather aggressively. However, according to the HTTYD 2 art book, the two are childhood friends.

Either way, the two became great friends with a strong, brother-like relationship. Gobber seems to be very supportive of Stoick, as he convinced Stoick to let Hiccup enter Dragon Training, because he can't protect him forever. However, he also isn't afraid to call out Stoick on his mistakes.

In film series, he is voiced by Craig Ferguson.

In TV series, he is voiced by Chris Edgerly.

In Japanese, he is voiced by Hiroshi Iwasaki.

Gobber the Belch is a six-and-a-half foot tall maniac who is tasked with training Hairy Hooligan teens in various skills needed to become a Viking: catching and training dragons, pirating skills, sword-fighting, and rudery (trading insults). He is incapable of speaking in any tone of voice other than a bellow.

In the course of Berk's long wars with the dragons, Gobber lost his left hand and right leg in battle with the creatures (the picture is reversed). He has managed to replace his missing limbs with a variety of metal prostheses of his own design and creation. His arm can be interchanged with other items such as a hammer or axe if needed (similar to Alvin the Treacherous in the books).

Since he is no longer able to take an active part in the war, Gobber is left responsible for the village's smithy and armory, keeping the other Vikings supplied with weapons and also with supervising the village's youngsters in Dragon Training.

Hiccup, the son of Chief Stoick, was tasked to assist Gobber in the armory ever since he was a small boy. Even though Gobber taught him a fair amount of skills which he would later put to good use, Hiccup's clumsiness eventually made him into the despair of Gobber, his father and the whole village. Seeing Hiccup's desire to become a true Viking, Gobber was the one who convinced Stoick to admit the boy to Dragon Training. After a typically clumsy start, Gobber was amazed when Hiccup became the new class's most proficient trainee, being able to incapacitate the beasts without the need for weapons. His skill grew so much, he even outclassed the fierce Astrid and earned the right to kill a dragon.

When Stoick ordered the entire village to embark to the island where the Dragons' Nest was located, Gobber went along with them although with some signs of nerves when asking what the plan for the attack was. The Vikings inadvertently released the Red Death from the Nest's depths and it soon set fire to their ships. Trapped on the island, Stoick ordered his people to flee to the other side of the island while he distracted the dragon by baiting it. As his oldest friend, Gobber volunteered to do the same. Together, they bought enough time for the Vikings to retreat. Gobber shared equal amazement when Hiccup and the other Vikings arrived on dragonback and take down the Red Death.

Later, when Hiccup had been wounded defeating the dragon, Gobber crafted a metal prosthetic to replace his left leg, cleverly adapting the foot to fit into the stirrup of Hiccup's custom-made dragon saddle. When Hiccup regained consciousness, Gobber welcomed him home by presenting him with a brand-new prosthetic tailfin for Toothless that would allow them to fly again.

Legend Of The Boneknapper Dragon

After the events of How To Train Your Dragon, Gobber's house was set alight one night. With some help from the now peaceful dragons, the house was saved but Gobber was convinced that a dragon had caused the fire. Mentioning his old tale of the Boneknapper, he set out to try and take down the beast once and for all to prove to the rest of the village that it was real, with his pet sheep Phil in tow. Hiccup, fearing for Gobber's safety, decided to tag along, and convinced his friends to come too.

Using a rowing boat to reach a distant island, Gobber told stories of his previous encounters with the mythical dragon, including stealing a treasure box from frozen Vikings, being saved by Hammerhead Whales and Yaksand failing to trap the Boneknapper himself in a forest. The sheer odd nature of his stories soon tell the Viking teens why the village do not believe his claims of the Boneknapper being a real dragon.

Now stranded themselves after their ship sinks, Gobber convinces the Viking youngsters to help him catch the Boneknapper, using Fishlegs as bait. Unbeknownst to them, the Boneknapper appears behind them and begins to attack. In the confusion, the young dragon riders group are trapped beneath a gigantic ribcage.

Luckily, Hiccup notices what the Boneknapper wants. The treasure Gobber took from the frozen Viking was a small belt buckle made of a tiny bone fragment. As the Boneknapper is always attempting to find the perfect bones for it's armour, Hiccup notices the belt buckle fits the outline of a missing fragment from it's neckplate. With some persuasion, Gobber agrees to give the bone back and the dragon becomes docile and friendly.

The Boneknapper flies the group back home, joined by others of it's species, as Gobber laughs that Stoick will have to believe his claims now.

Gobber was heartbroken when Stoick died, and he delivered an eulogy as a final farewell to his best friend.

"Oh, you've made plenty of marks. All in the wrong places!"

Gobber telling Hiccup he is not good at wielding weapons.

"If you ever want to get there and fight dragons, you need to stop all… this."

"Exactly! Stop being all of you!" 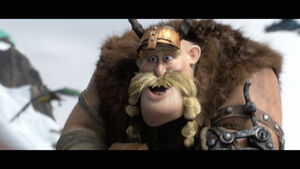