NOTE: For other depictions of God, please click here.

Observing everything that people do.

Forgive/Cleanse People's Sins except eternal sin.
Finding prophets to represent him on Earth.

Have everything go according to his plan.
Remain worshipped.
Admit his worshippers into Heaven and send the others to Hell.
Punish people for their sins (all succeeded).

No family given before the Creation.

Predominant family afterwards including Archangels, normal angels, Lucifer, and Jesus (as a human)
None (in Islam)

He has a "son" named Jesus who is also the penultimate (second to last) prophet before Muhammad, a king, a high priest, an imam, a teacher, and the messiah (savior). His arch-enemy is the former archangel and jinn Satan.

The entire human race is believed to be created in his image.

God is the English name given to a singular being in theistic and deistic religions (and other belief systems) who is either the sole deity in monotheism or a single deity in polytheism. God is most often conceived of as the supernatural creator and overseer of the universe. Theologians have ascribed a variety of attributes to the many different conceptions of God.

The most common among these include omniscience (infinite knowledge), omnipotence (unlimited power), omnipresence (present everywhere), divine simplicity, and eternal and necessary existence. God has also been conceived as being incorporeal (immaterial), a personal being, the source of all moral obligation, and the "greatest conceivable existent". These attributes were all supported to varying degrees by the early Jewish, Christian and Muslim theologian philosophers, including Maimonides, Augustine of Hippo, and Al-Ghazali, respectively.

Many notable medieval philosophers and modern philosophers have developed arguments for the existence of God and in modernity against. God is known for His kindness towards His children and His fellow angels in Heaven and loves to have people praise Him. God also gave man the knowledge to name all the animals. The Bible and the Quran are the most important books in the world as they were made through human beings and god.

Battle with the Devil

In the End Times, God only intervenes at the last minute, because He is a fair God and will even let evil have its own way, because it is needed to maintain balance, hard as it may be for humans to understand this. However, God will not stand His own followers being slaughtered, so he manifests as Jesus, and comes into the world millennia after Jesus' crucifixion in order to set all wrongs right. God leads the righteous souls and those Raptured to the final battle and He duels and kills the Antichrist, then clashes with the Devil.

The Devil and his followers rally to attack Jesus by firing at them but Jesus/God blasts the armies of darkness out of the way. Vultures come and feast on those wicked humans who followed the Antichrist. Some believe that the Devil will be left corned, and he will be thrown into the deepest pits of Hell, bound and restrained for all eternity, never to return to tempt humanity, being as close to death as he can be in this pit because there is no escape from the tortures which await him.

Others believe the Devil will be finally destroyed and obliterated from the Universe, never to return to wage war on God again.

Note: This isn't meant to offend anybody of faith by revealing God's true image. Please don't take this as an attack on your religion. This is research from The Bible. Please respect this before proceeding further.

God's appearance is something He was proud of until The New Testament. Before that, God only revealed Himself to a handful of prophets (Moses, Elijah, Enoch, and Ezekiel). God's true face was largely unknown until the time of Ezekiel, for Moses did not reveal what he saw - having been struck radiant with amazement! So Ezekiel was unharmed when he saw the Lord; because he was living in a time God was more open with mankind about His identity.

In Suffi Islam, and as depicted in The Quran, Allah is a living, conscious. When He interacts with people, He manifests as a Voice on the wind, and He has the powers to do practically anything He desires. Allah is the Sustainer and the Source of All Life, and everything returns to Him.

Allah is shown as compassionate, and capable of great love so long as one repents their sins and turns back to His original plan. Allah is swift in retribution and tolerated no nonsense or rebellion from His followers. He constantly lists disbelieving nations He made an example of as an example of His mighty power and willingness to do anything He desires.

He revealed Himself to Ezekiel as a humanoid form; wearing crimson robes and golden armour, enshrouded in a beautiful rainbow, encircled in beauty.

God's true appearance was revealed by Jesus; because when Jesus ascended back to Heaven upon His Resurrection; Jesus had aged and was now depicted with long flowing white hair and a white beard. Once he had fully ascended to Heaven, he had lost all his hair except on his head but grew it back on when revealing himself to humanity. This can be taken as meaning God's true face finally revealed. He was wearing all white.

God, Himself is revealed in the finale of Revelation when He descends to cleanse Earth of its sins. He is wearing all white on a white throne. A truly beautiful Master of Creation.

Note: This isn't meant to offend anybody of faith by revealing God's true image. Please don't take this as an attack on your religion. This is research from The Bible. Please respect this before proceeding further.

God's personality is something which is very sensitive to a lot of people. They view His personality as something above all human comprehension and that to even attempt to decipher His inner thoughts is blasphemy. However, what has been revealed about His personality (by Himself, through The Bible) is surprising. Fitting God's speech that we were made in His image; God declares that He is capable of human emotions. He can feel great wrath, love, peace, unrest, unease and even ruthlessness (towards His enemies only). What little is revealed about God's character is that He absolutely hates the notion of other deities, viewing them as demons, and says that this polytheism (and murder) are among the worst sins. God loves all life; which is why He gives us prophets, to save us and sway us back to Good. However, when a person is so steeped in evil, God's heart grows sad, and He reluctantly hands us over to Satan as the wicked are the Devil's property.

God has very strict (yet simple) rules on how we ought to live. These include basic values such as preserving life (no murder) living a clean spiritual life (no lust or listening to deceit) and aiding others (encouraging evil-doers to repent). These are basic rules yet He has established higher rules too. For instance, a recurring theme in His rules is that we ought not to touch unclean animals, for instance, pork, shellfish, sea creatures which live on the bottom of the ocean (eels) and numerous birds (although this was strictly for the Jewish people as Christians are largely exempt from this rule). However He still values these creatures (as He told Noah to rescue unclean animals as well as clean ones). God absolutely hates unclean items and if one of His people touches them, they are defiled (spiritually unclean) and have to go through a ritual to become pure again. Cleanliness is next to Godliness, and for this reason God wishes us to not be envious, put aside all impure sexual lusts, and to aid and redeem others.

God allows evil because to Him everything ought have its own place in the world. It is the will of God in this world that life is not perfect, partly our own fault, and we ought to grow up and learn from our mistakes, thereby countering darkness and evil. As the saying goes, we learn from our mistakes, and God knows this better than anyone. He knows life is not all sunshine and rainbows but there will be challenges afoot. The theme of Abrahamic religions is to sin, then be cleansed through repentance. One cannot simply live a clean life. We are all sinners, said Paul, and we must face this if we seek God. Also, God knows that evil is limited and He waits for the day He can set all to rights. However, Satan is still the Prince of This World and God has acquitted the world to him, so God must wait until Satan’s reign is over so He can kill the Devil. Satan is from where all evil comes, and all impure thoughts, and only through the Devil's demise can a perfect world be established.

Because of His strictness, willingness to use violence and allowance for evil, God has been viewed by many maltheists as being a flawed entity, a popular view in the Enlightenment. Alternatively, they see this as a flawed human interpretation of who God actually is. 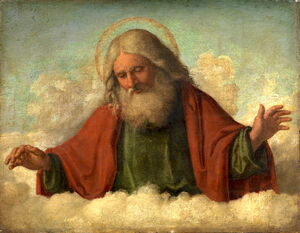 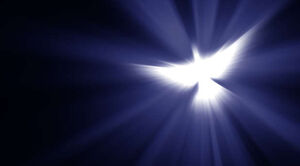 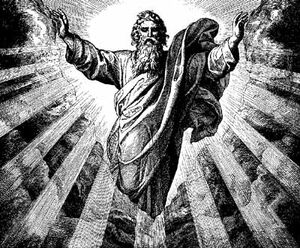 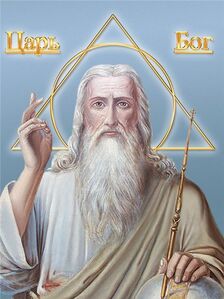 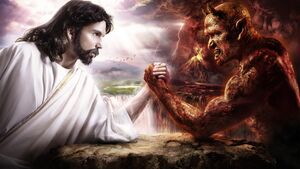 God the Son (Jesus Christ) vs the Devil. 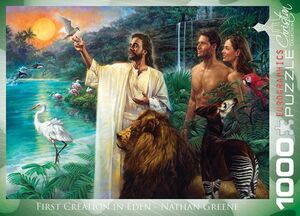 God creating Adam and Eve and giving them His paradise and final creation, Eden. 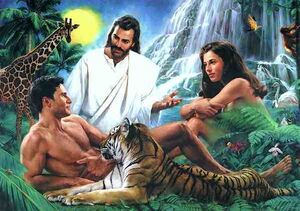 God brings Adam and Eve all the beasts of the field. 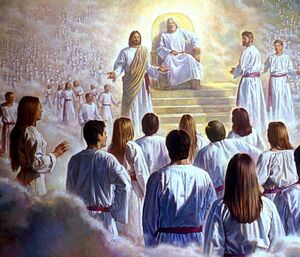 God the Father receiving the souls of the Faithful in Heaven, alongside His Son, Jesus Christ. 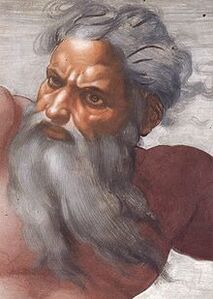 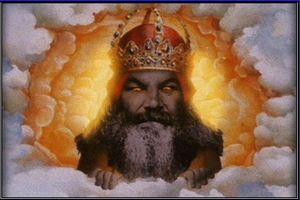 Another artist's perception of God. 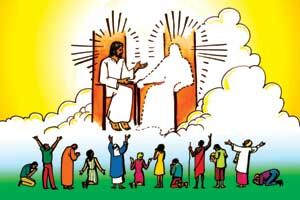 God the Son (Jesus Christ) sitting at the right hand of God the Father.