The Grimm
God of Darkness (occasionally)

The God of Light is the overarching protagonist in the American web cartoon RWBY and, by extension, its manga adaptation/prequel and video game. He is also one of the creators of humanity.

He is voiced by Chase McCaskill.

He respects the finite limits of life, refusing to revive Ozma, beseeching Salem to let him rest. The God of Light also loved Remnant, considering it to be a "beautiful experiment", and deeply cared for Humanity to the point where he would fight with his brother to protect them from anything his brother threw at them, seeing them as creatures to empathize with, and being overprotective to where he would bless them and gave humanity a secret power to fight back against the Grimm his brother continued to create. He was clearly very reluctant when his brother intended to wipe out all of Humanity and would bring them back and grant Ozma the chance to reincarnate in a mission to redeem Humanity, showing despite their rebellion, the God of Light could not detach himself from his creations.

Much like his creations, he is prone to using body language when conversing in his humanoid form such as hand gestures and cocking his brows during his conversation with Ozma when he first proposed the offer of reincarnation to the hero. This is likely an attempt to better communicate, as he has been shown to be less than objective regarding his interactions with Humanity.

The story of the God of Light and the God of Darkness is a religion within RWBY, though several prominent characters such as Ozpin and Qrow Branwen believe it is true.

In the beginning of Remnant, there existed two deities: a pair of brothers. The older brother was the God of Light, and the younger was the God of Darkness. The older brother took great pleasure in creating forces of life, light, and prosperity in the world. The younger brother hated these creations and would create forces of destruction, death, and darkness to remove his brother's creations from the world. However, life always prospered.

In an extreme attempt to finally rid Remnant of life, the God of Darkness created the Creatures of Grimm to help him destroy everything that the God of Light had made. After the Grimm were created, the God of Light decided that their feud would continue no further. He defeated his brother, then proposed that they make one final creation together, one that share their ideals and views. The God of Darkness agreed, and together they made humanity, which was capable of both creation and destruction. They also gave humanity the ability to choose, and the ability to gain the knowledge to make the choices.

Before the gods abandoned Remnant, they left behind physical manifestations of the four gifts they bestowed upon humanity: choice, knowledge, creation, and destruction. If any were to collect them all, they could alter the world as they see fit. These relics are the desired goal for the villainous Salem, though her intentions with them are currently unknown.

In Volume 5, Ozpin explains that the gods cursed him with immortality for failing to stop Salem in the past. Every time he dies, his soul moves into a like-minded individual, and he eventually takes control of them, gaining their thoughts and abilities while also remembering his past memories.

in Volume 6, it was finally revealed that the God of Light and his brother abandoned Remnant for a very specific reason: One day, a Human named Salem approached him in the Domain of Light. She begged him to bring her husband Ozma back from the dead, but he denied her, saying he must maintain the balance of life and death. Salem went to the God of Darkness to request the same of him, and the God of Light appeared in his domain after his brother granted Salem her wish. As tensions escalate, the brothers feud in their draconic forms until the Light God said Salem came to his brother only after him denying her request. The God of Light transports Salem to his domain before she retaliates, where the Fountain of Life grants her immortality. He with his brother said they did so as both punishment and to help her learn the importance of life and death, but she is unmoved. Salem calls people of the world to denounce the gods, finding promise in her immortality. As a response, the God of Darkness harnesses their onslaught of magic and crushes it, killing every Human except for Salem, much to the God of Light's visible sorrow. The God of Light gives a damning farewell to Salem and departs Remnant.

However, unable to detach himself from his beloved creation, the God of Light apparently resurrects humanity and calls Ozma from the afterlife in an alternate realm between worlds and requests that he return to Remnant to unify the changed world. He creates the four Relics - Creation, Destruction, Choice and Knowledge - to aid Ozma in this goal and tells them that brought together, the Relics will summon the Gods back where they will judge humanity and Remnant, promising to restore Humanity if they have learned to live in harmony. Ozma accepts, but the God of Light warns him that Salem is no longer the person he remembers and that he will only find pain with her.

The God of Light first appearance. 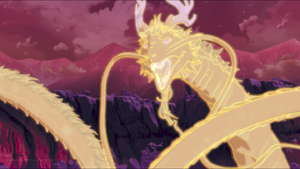 The God of Light's dragon form.