Fighting other monsters
Protecting humans, including the Calico crew

Godzilla is the titular kaiju protagonist and one of the main protagonists (alongside the Calico crew) of the 1978 Hanna Barbera TV series, Godzilla Power Hour. He is a giant, radioactive prehistoric reptile who lives in the ocean, and is called by the Calico crew when they need him.

His vocal sound effects were provided by the late Ted Cassidy.

When needed, a little transmitters is what calls Godzilla into action. Godzilla fights many monsters throughout the series, and goes through many occurrences. He fights a giant firebird in the Arctic, battles a ground-tunneling monster, clashes with a Chimera, tussles with a magnetic turtle monster, and many more.

On one occasion, he goes back to the time of the dinosaurs, A day fights a Diplodocus and a Time Dragon (a large theropod like a T-Rex). In another instance, an alien monster that changes into different forms took on the same form as Godzilla himself, and Godzilla fought him. Godzilla has even been shrunk in an episode where while he got smaller, a fly began to grow.

He battles a cyclops monster on a tropical island, and desert monsters in a sandy desert.

In the Hanna Barbera series, this Godzilla looks very child friendly. He has an expression that shows emotion. He has comical spikes on his back, a pot belly, and a cartoony look overall.

He has a green skin color, which is uncommon in other Godzilla variations. His spikes are a darker shade of green. He has black pupils with white at parts, so as to show some glint. His teeth and claws are light gray.

The Hanna Barbera Godzilla has an aggressive attitude when fighting other monsters, which isn’t shared by other variations of Godzilla. He battles in a slapstick, cartoony way. The opposite holds true when coming to human defense. In many cases, when he is called upon, he makes sure that the Calico crew is safe. In a lot of ways, he expresses emotion. His care is noticeable when he holds the Calico in his massive hands. 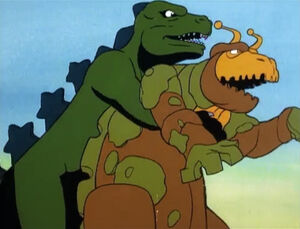 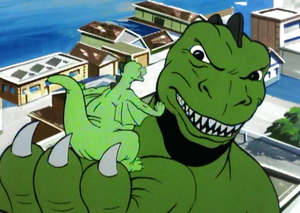 Godzilla with his cousin, Godzooky. 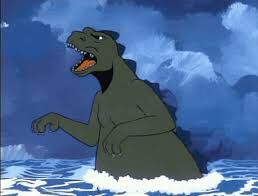 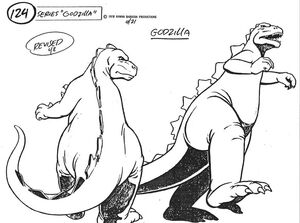 A drawing of the Hanna Barbera Godzilla. 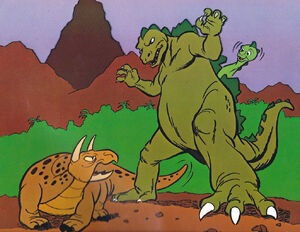 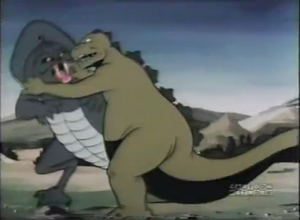 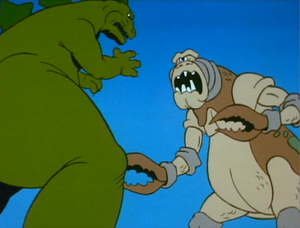 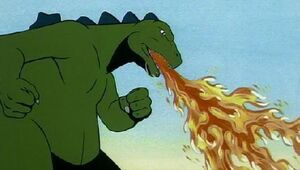 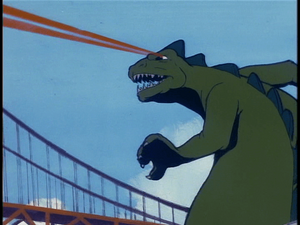 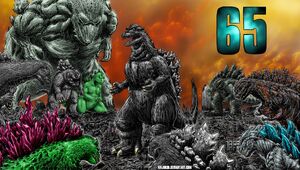 The Hanna Barbera Godzilla on the upper right along with other Godzillas. 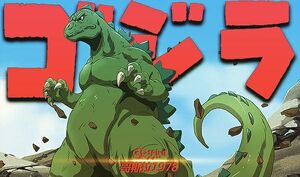